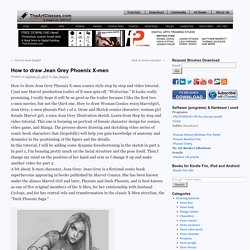 I just saw Marvel production trailer of X-men spin off, “Wolverine.” It looks really promising, I really hope it will be as good as the trailer because I like the first two x-men movies, but not the third one. How to draw Woman Comics #005 Marvelgirl, Jean Grey, x-men phoenix Part 1 of 2. Draw and Sketch comics character, woman girl female Marvel girl, x-men Jean Grey illustration sketch. Learn from Step by step and video tutorial. Drawing Marvel girl Jean Grey Watch drawing video tutorial how to draw comics character Jean Grey part two Jean Grey is a mutant born with telepathic and telekinetic powers. 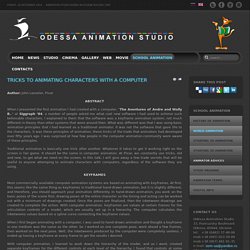 ," at Siggraph ‘84, a number of people asked me what cool new software I had used to achieve such believable characters. I explained to them that the software was a keyframe animation system, not much different in theory than other systems that were around then. What was different was that I was using basic animation principles that I had learned as a traditional animator.

It was not the software that gave life to the characters, it was these principles of animation, these tricks of the trade that animators had developed over fifty years ago. I was surprised at how few people in the computer animation community were aware of these principles. Traditional animation is basically one trick after another. Most commercially available computer animation systems are based on animating with keyframes. Even the slightest movement will keep your character alive. Frame Drills. Timing bootcamp. Clean Constraints. Constraints can be confusing, and damn are they annoying and unintuitive! 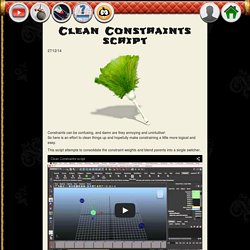 So here is an effort to clean things up and hopefully make constraining a little more logical and easy. This script attempts to consolidate the constraint weights and blend parents into a single switcher. How do I use it?! To use it, copy the below and paste it into a new shelf button as a PYTHON script. Interactive 3D for the Open Web. RAID. FANCY LAMP. The China Shop - Disney (1934) 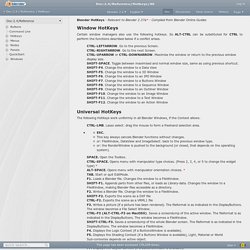 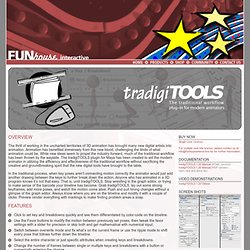 Animation has benefited immensely from this new blood, challenging the limits of what animation could be. While new ideas seem to propel the industry forward, much of the traditional workflow has been thrown by the wayside. The tradigiTOOLS plugin for Maya has been created to aid the modern animator in utilizing the efficiency and effectiveness of the traditional workflow without sacrificing the creative and groundbreaking spirit that the new digital tools have brought to the table.

In the traditional process, when key poses aren’t connecting motion correctly the animator would just add another drawing between the keys to further break down the action. Features Click to set key and breakdowns quickly and see them differentiated by color-code on the timeline. Maya User's Guide. 128 Keyboard Shortcuts for Autodesk Maya.