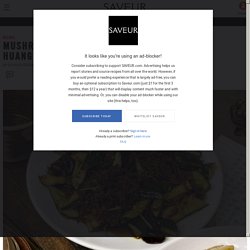 Instructions In a small heatproof bowl, add the mushrooms and enough boiling water to cover. Cut the cucumber in half lengthwise, and place each half cut-side down on your cutting board. Transfer the cucumber to a medium serving bowl. Genius, Make-Ahead Butternut Squash Side Dish Recipe for Thanksgiving. Every week in Genius Recipes—often with your help! 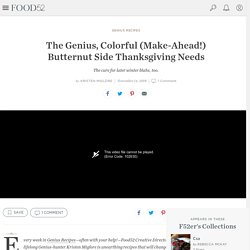 —Food52 Creative Director and lifelong Genius-hunter Kristen Miglore is unearthing recipes that will change the way you cook. When I say “make-ahead butternut squash,” you might picture a dependable soup or casserole—something that will hold its form, maybe even slowly, invisibly improve with age. Broccoli Caesar Salad Recipe. Curried Chickpea Sandwich Recipe on Food52. Deb Perelman’s Winter Slaw with Farro Recipe on Food52. Test Kitchen-Approved Author Notes Deb Perelman had yearned for a grain salad with an inverted proportion of grains to vegetables for some time before tasting the inspiration for this one at the West Village restaurant Via Carota. Finally, she felt more confident to make her own. Since then, she’s seen scant proportions of grains peek through in other restaurant salads (often fried freekah for toasty, popcorn-like crunch) and made all sorts of variations herself.

She loves switching in walnuts and “diced pillowy bits of Taleggio or Robiola instead of Parmesan cheese.” Prep time 30 minutes Serves 6 to 8 Ingredients. Edamame Salad Recipe. This edamame salad is simple and has a swanky sophisticated vibe to it despite the fact that it calls for just soybeans, miso dressing, and salad greens. 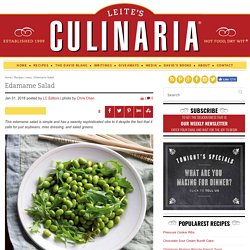 Simple. Sophisticated. Satiating. That’s what we think of this edamame salad recipe. And while you have the steamer set up for the soybeans, you may as well steam the rest of dinner. Special Equipment: Bamboo steamer. Crispy Thai Calamari Salad - Healthy? Kinda. Fresh? Definitely. A few years ago, my local favorite Thai take-out royally f’ed me. 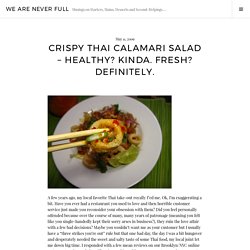 Ok, I’m exaggerating a bit. Have you ever had a restaurant you used to love and then horrible customer service just made you reconsider your obsession with them? Did you feel personally offended because over the course of many, many years of patronage (meaning you felt like you single-handedly kept their sorry arses in business?) , they ruin the love affair with a few bad decisions? Maybe you wouldn’t want me as your customer but I usually have a “three strikes you’re out” rule but that one bad day, the day I was a bit hungover and desperately needed the sweet and salty taste of some Thai food, my local joint let me down big time. During my hiatus from the local Thai restaurant, I did learn to make some Thai-inspired dishes at home.

What to do: Make your pickled carrots by first gently heating the vinegar, water and sugar until sugar has completely dissolved into the water/vinegar mixture. 6 243Share6 Related. How to Make Salade Niçoise. Composed salads are immensely satisfying—a little of this, a little of that, arranged tidily on a big platter. 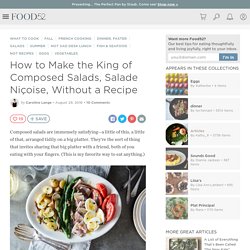 They're the sort of thing that invites sharing that big platter with a friend, both of you eating with your fingers. (This is my favorite way to eat anything.) Chief among les salades composées is the salade Niçoise—which is named after the beachy city of Nice in the south of France, should you need further convincing that this composed salad is, at its best, a relaxed (yet elegant!) Finger-food affair. ROAST BEETROOT SALAD. This little mix got enough likes on my instagram to convince me to get it down on paper (/screen/blog). 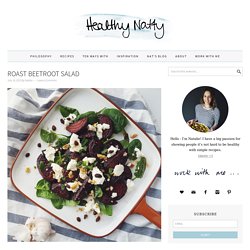 The idea came from some beetroots in my fridge that began going soft, next to a beautiful tub of fresh ricotta (it was still warm when I picked it up in the shop that morning!) , and the sultanas I’d just nibbled on as I was including them in an apple crumble. Welcome to my brain. Mixed Greens with Pears, Goat Cheese, Dried Cranberries and Spiced Pecans. 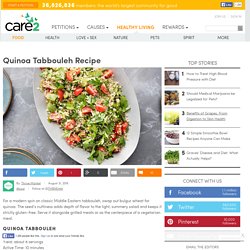 The seed’s nuttiness adds depth of flavor to the light, summery salad and keeps it strictly gluten-free. Serve it alongside grilled meats or as the centerpiece of a vegetarian meal. QUINOA TABBOULEH Yield: about 8 servings Active Time: Ingredients: How to Cook the Perfect Pot of Quinoa. By Angela Carlos This week on Chopped Teen Tournament, we saw four young cooks compete for the chance to move on to the grand finale. 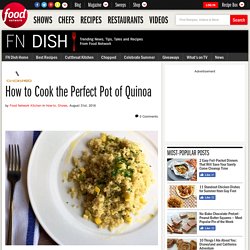 You could feel the pressure rising as they used their experiences, both inside and outside the kitchen, to inspire their dishes. In Round 1, it wasn’t immediately clear what the teenage cooks were going to come up with using saucisson en croute (a fancy pig in a blanket), quinoa, white harissa and seaweed salad, but they figured it out, and Lyanna and Thomas even received a special nod from the judges for their restaurant-quality plating styles. Quinoa has become increasingly popular over the last few years, but that doesn’t mean it’s the easiest food to cook. An oldie but a goodie superfood, seaweed, is making waves again. Let's face it, you're not going to have seaweed with a side of popcorn. 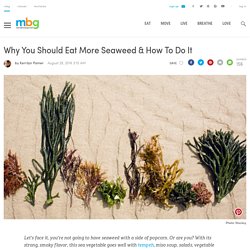 Or are you? With its strong, smoky flavor, this sea vegetable goes well with tempeh, miso soup, salads, vegetable stews, and heaps of greens. Maybe it's the synergistic effects of all those healthy ingredients that keep the Okinawans living past 100, as well as giving people on macrobiotic diets (of which seaweed is a staple) lustrous hair and glowing complexions. Panzanella Recipe. Panzanella, or Tuscan bread salad, is an Italian staple that tosses day-old bread with tomatoes and olive oil. 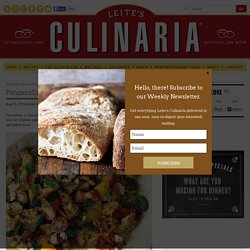 It tastes spectacularly complex for something so simple. And just wait’ll you try this version with grilled bread. Couscous Salad With Dried Apricots and Preserved Lemon Recipe. TheModelFoodie - Home - Chickpea, Avocado, Cucumber & Feta Salad. What's your definition of a salad? Marinated Kale Salad. I know that raw kale may sound terrible, but trust me it can be really amazing. I’ve been teaching this salad a lot in my cooking classes and despite a lot of scepticism to begin with, everyone absolutely adores the end result. It’s one of my all time favourite recipes too, and I make it all the time – it’s just so easy, so delicious and it makes me feel so awesome. The trick to getting kale delicious is to make it wonderfully soft and tender, which we do by massaging the leaves with a delicious dressing of tahini, tamari and apple cider vinegar or lime.

How to make the perfect fattoush. The ubiquitous chopped salad of the Middle East – as Yotam Ottolenghi and Sami Tamimi write in their book Jerusalem, there’s no escaping it: “It’s a local affliction, quite seriously.” Eaten at almost every meal, fattoush, with its cool cucumber and crunchy radish, feels more like a “proper salad” than the equally famous tabbouleh, according to Sabrina Ghayour. It also happens to be an excellent way of using up stale pitta – if, indeed, you happen to have any knocking around after last week. Infinitely adaptable and wonderfully refreshing, fattoush is a useful little number to have in your culinary armoury.

The lettuce dilemma Most of the recipes I try contain lettuce in varying quantities, either little gem, or the larger version, cos – but the recipe in Jerusalem (passed down from Tamimi’s mum) omits it, as does Claudia Roden. The rest. 7 fires: lessons from the argentine grill master. My Irishman first introduced me to Francis Mallman, the Argentine grill master, via YouTube.

I think it was something about cooking the perfect steak. He talked a good talk, so we were both pretty keen to order a copy of his book, ‘Seven Fires – Grilling the Argentine Way’. Given the reputation of the Argentinian people as hard core carnivores, I assumed we would pick up some tips for cooking meat on the BBQ. To my (pleasant) surprise I’ve actually learned a heap about cooking vegetables and sauces from Mr Mallmann. I’ve already blogged about the famous Chimichurri sauce. How to Make Sauce Niçoise : French Cooking. It’s rare for a sauce to be so amenable—to be festive enough for company, but easy enough for a weeknight; to be as well suited for meat and fish as for pasta and grains; to be exceptionally tasty when made with the best ingredients, but perfectly delicious with subprime ones, too. Kale Bistro Salad. Grilled Corn and Tomato Salsa Salad. Lacinato Kale and Pecorino Salad Recipe. UPS sent two U-Haul trucks on Tuesday to pick up the last of the QK holiday orders.

We pack each box with a lot of love, then send them off with a kiss, and I catch myself in a cycle of reloading the tracking dashboard to see how they are progressing across the country. Nick Stellino - Roasted bell Peppers in Balsamic Vinegar. Ingredients: 8 bell peppers, halved, cored and seeded preferably a mix of red yellow and green peppers 8 tablespoons of olive oil 2 teaspoons chopped fresh garlic 1 teaspoon salt 1/2 teaspoon black pepper 1 tablespoon balsamic vinegar 2 teaspoons chopped fresh Italian parsley 1 loaf Italian bread, sliced, toasted in the oven and rubbed with garlic Serves 8Printable VersionPreheat oven to 500°. Brush the pepper halves with 4 tablespoons of the olive oil, place skin-side-up on a nonstick baking sheet and bake for 15-20 minutes, until the skin is blackened. Transfer the peppers to a large paper bag, seal and let it cool. Peel off the blackened skin, slice the peppers into strips and set aside.

Insalata Pantesca. Bruno, Chief of Police - Salades et legumes. Deborah Madison's Genius Technique for Better, Brighter Lentil Salads. Rania's Recipes: Tuscan Picnic. Broening: Let the flavor in by crushing then cutting, not just slicing it open. By John BroeningSpecial to The Denver Post Posted: 08/05/2015 12:01:00 AM MDT (Thinkstock by Getty Images) I'm writing from Maine, where it's the height of the season and the farmer's markets are full of cucumbers of all shapes and sizes, from Kirbys to lemon cucumbers to English and striped Armenian cucumbers. Recipe: Farro Salad with Roasted Eggplant, Caramelized Onion, and Pine Nuts - Recipes from The Kitchn. Tomato, Onion, Avocado Salad. Recipe: Pine Nut and Scallion Couscous - A Summer Shabbat with Leah Koenig. Juicy Marinated Cherry Tomatoes. I saw some lovely looking cherry tomatoes in the greengrocers the other day and remembered that I had seen a recipe on Pinterest which I wanted to try out.

I have hundreds of recipes that I want to try out so it was quite amazing that I remembered this one! I am embarrassed to say that it wasn’t until I was in my late twenties that I began to appreciate raw tomatoes. Caesar Dressing. Food52. The Best Tabbouleh Salad.