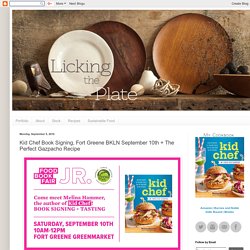 - this coming Saturday. I'll be in the center of the Fort Greene farmers market at the Food Book Fair tent, from 10am-12pm, and the weather forecast looks perfect! Speaking of perfect, as summer (very unfortunately) winds down, I wanted to share the gazpacho gulps recipe from Kid Chef here. It is refreshing, super flavorful, and easy to make. Malaysian Laksa Soup. Laksa is a very easy yet deliciously comforting malaysian soup. 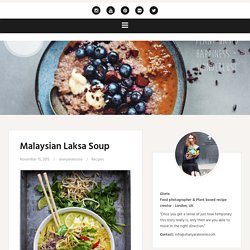 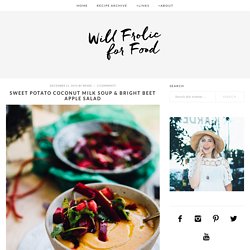 It’s the perfect marriage of cozy and light. During the winter months I’m consumed with thoughts of hearty fare and grounding foods. Roasted roots, protein-rich grains, stews, chilis, soups. I can barely bring myself to think about eating something cold. Tis the season of cooked things, of course. But I still need the energetic brightness of raw foods occasionally. So to quell the yogi/nutritionist/mom inside of me, I’ve been combining my cooked foods with raw foods. 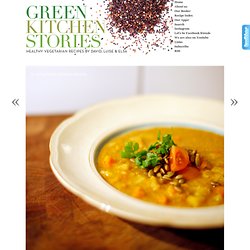 Being a vegetarian for 15 years now I must have tried at least a thousand (probably more?) Different veggie-recipes and I can honestly say that not much beat this lentil soup. It isn’t very fancy, recipe-smart or unique, but has a secret and is just one of those dishes that makes me close my eyes after putting the first bite in my mouth. Turmeric and Lentil Soup. So the last month has been a bit mad for me as I’ve been finishing my cookbook before we start shooting it on Monday, which is so exciting! 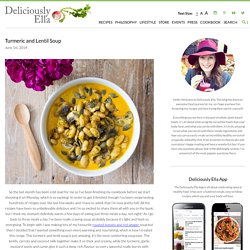 In order to get it finished though I’ve been recipe testing hundreds of recipes over the last few weeks and I have to admit that I’m now pretty full! All the recipes have been so unbelievably delicious and I’m so excited to share them all with you in the book, but I think my stomach definitely wants a few days of eating just three meals a day, not eight! As I go back to three meals a day I’ve been really craving soup, probably because it’s light and feels so energising. To begin with I was making lots of my favourite roasted tomato and red pepper soup but then I decided that I wanted something even more warming and nourishing, which is how I created this recipe. This turmeric and lentil soup is just amazing, it’s the most comforting soup ever. Serves 2 - 1 and a 1/2 cups of water (300ml) - 1/4 a cup of split red lentils (50g)

Sweet Potato, Carrot & Red Lentil Soup. She woke me up and crawled up close to me. 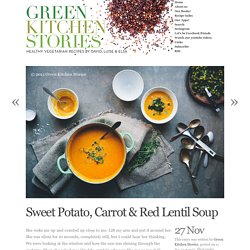 Lift my arm and put it around her. She was silent for 10 seconds, completely still, but I could hear her thinking. We were looking at the window and how the sun was shining through the curtains. Then she asked me: “Daddy, explain why you like me so much?”. Her voice didn’t reflect any doubt. I told her that she was the kindest little person I knew. I was quiet, curious to hear her reaction, if she was satisfied with my response. SPICED LENTIL SOUP WITH COCONUT MILK. SPICED LENTIL SOUP WITH COCONUT MILK // Serves 6 Recipe adapted from The Travelers Lunchbox who adapted it from Once Upon a Tart The recipe calls for green lentils. 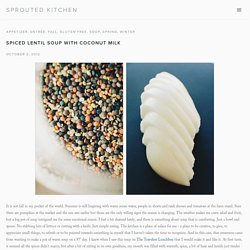 I used a mixture because I have a large amount of them and they worked just fine. Split or red lentils will likely get too mushy here. I used 4 cups broth because I like my soups on the stewy side, if you prefer more broth to you soup, add another cup or two when cooking the lentils. 1 1/2 cup lentils, rinsed (green suggested) 4 cups low sodium vegetable broth 1 1/2 tsp. tumeric OR curry powder. Hippie Harvest Hemp Gazpacho - Will Frolic for Food.

Simplest Tomato Soup with Star Toasts. Sometimes life needs a little spicing up to make familiar things new again, and it’s funny what even the simplest things can do. 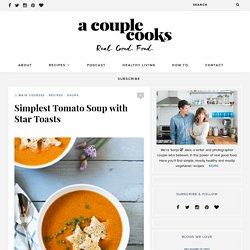 Moving a piece of furniture can make a whole new room. Taking a new way to work, trying a new restaurant, or exploring a new neighborhood can add a new dimension to a familiar city. Even just adding a new recipe or two to the rotation can make the weekday grind more fun. And if this works with adults, it’s even better with kids. I remember as a child our family had a plate with the words “You’re the Best” inscribed in script along with a big red heart. Case in point: these star toasties! How about you — what simple things do you do to keep life interesting and varied? Tomato and Chargrilled Pepper Soup with feta and bacon - Izy Hossack. The Best Coconut Soup, Ever. I have friends in high places, meaning I got buddies who can cook. 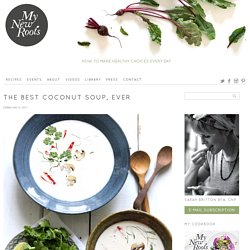 One of those friends is Kiki, and ironically, we met in design school. We loved what we did at the time, never imagining that both of us would end up in a completely different place – the food world. Just one year after graduation, Kiki enrolled in culinary school and trained classically to become a chef. Thai pumpkin soup. Tom yum (hot & sour) soup with prawns. Thai Coconut Soup (Tom Kha Veggie) - Heavenlynn Healthy. This thai coconut soup, tom kha veggie as I like to call it, adapted from the original tom kha gai, has been my favorite coconut soup this fall. 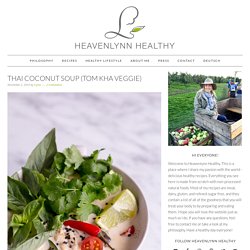 It’s the perfect mix of a warming coconut broth, fresh spices such as lemon grass and lime leaves, as well as veggies and fresh herbs. It’s easy to prep, and I’ve tried to reduce the foreign ingredients to a minimum that you will get at every Asian store around the world, and even in most well-stocked supermarkets. Strawberry gazpacho for a hot day. June 25, 2017 Keep fingers crossed for Thursday! I am secretly counting on it and officially not caring. I got ukulele, songs by Jonny Cash to learn on the road, new Wow Wow for Mia (she thinks it’s the old one which she already lost twice), books prepared.