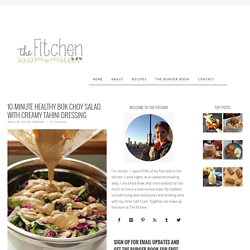 There was a time when we made this dish 3 or 4 times per week. I don’t get sick of it. It requires nothing more than a blender and a large bowl, involves no cooking, and is done in less than 10 minutes. Once you taste the tangy, sweet, creamy sauce, you’re going to want to put it on everything and dip everything in it. Bok choy is such a versatile, inexpensive, healthy veggie. This recipe, in particular, has a special place in my heart.

On top of bok choy’s many charms, I also appreciate the simplicity of this dish. Cauliflower Chickpea Salad. This is one of those meatless meals that is hearty enough to make me consider becoming a vegetarian. 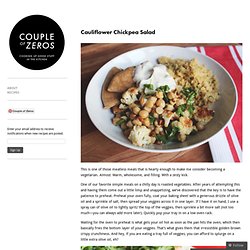 Almost. Warm, wholesome, and filling. With a zesty kick. One of our favorite simple meals on a chilly day is roasted vegetables. After years of attempting this and having them come out a little limp and unappetizing, we’ve discovered that the key is to have the patience to preheat. Waiting for the oven to preheat is what gets your oil hot as soon as the pan hits the oven, which then basically fries the bottom layer of your veggies.

Roasted CauliflowerAdapted slightly from Rachael Ray 1 head cauliflower, cut into bite-size florets2 T. extra-virgin olive oilSalt and pepper Preheat the oven to 425°F. Roasted Cauliflower Chickpea SaladAdapted slightly from Rachael Ray Preheat the oven to 425°F. Chickpea Feta Salad with Herbs. I know…. a salad… sorry to be a bummer and not post some crazy brownie or something… But these salads are key. 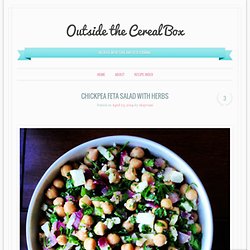 I hate rushing around getting food ready right before I have guests over. Salads like this one can be made up in advance and they’re good to go whenever. Cooking up good stuff in the kitchen. DiepLiciousTHE PERFECT COLESLAW » DiepLicious. The typical diner coleslaw that we all know conjures images of blandness, and has given real coleslaw an undeserved bad rap. 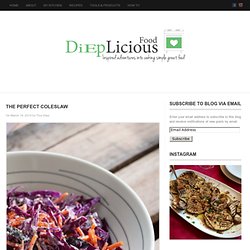 Eating real homemade coleslaw with barbecue is amazing, and this particular recipe is the best coleslaw that I have ever had. The secret is adding celery seeds to the slaw – it really makes a huge difference. Add some red cabbage for a color-perfect salad that stands out from the rest. The best part is that it’s super easy to make. The perfect coleslaw 1617 calories 23 g 92 g 168 g. Highgate hill kitchen. I’ve recently discovered the enjoyment of the journey. 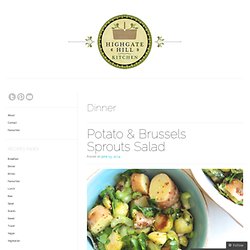 Normally, getting from one place to the next, like from the bus stop back home, is about functionality, the necessity of moving from one space to another. Honey Mustard Chicken Chopped Salad. Hungry Couple: Mediterranean Chickpea Salad and the Art of Parties. This past week, the New York Times Sunday Magazine ran a lighthearted article that looked into the typical refrigerator contents of a few chefs and it made me consider what's always in mine. 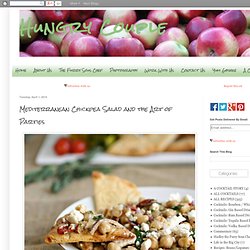 Eggs, butter, yogurt, milk and cheese are the constant and, interestingly, was for them as well. Japanese Cucumber Salad. Growing-up I didn’t see my Father’s side of the family as much I would have liked. 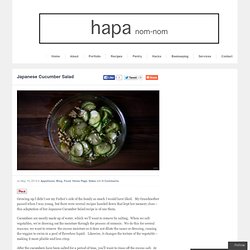 My Grandmother passed when I was young, but there were several recipes handed down that kept her memory close – this adaptation of her Japanese Cucumber Salad recipe is of one them. Cucumbers are mostly made up of water, which we’ll want to remove by salting. When we salt vegetables, we’re drawing out the moisture through the process of osmosis. We do this for several reasons; we want to remove the excess moisture so it does not dilute the sauce or dressing, causing the veggies to swim in a pool of flavorless liquid. 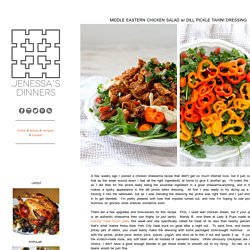 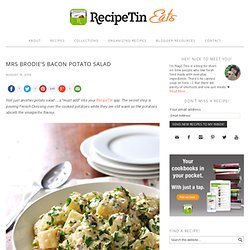 The secret step is pouring French Dressing over the cooked potatoes while they are still warm so the potatoes absorb the vinaigrette flavour. This is Mrs Brodie’s Bacon Potato Salad recipe. Nectarine Salad with Seared Chicken & Carrot Ginger Dressing - The Woks of Life. Protein packed salmon salad — The Kitchen Alchemist. Strawberry Kale Salad with Nutty Granola Croutons. The Owl with the Goblet: Parmesan Roasted Cauliflower. The Ultimate Potato Salad. Turkish Cucumber Salad. It is what you are that heals, not what you know. 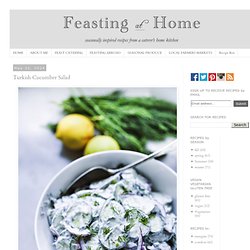 I have been all about mixing {simple} flavors lately…and really enjoying the fact that pomegranates are everywhere…and sometimes even pre-peeled (THANK YOU TJ’s) Whenever I go to Whole Foods for their hot/cold bar, I look forward to eating their pearled cous cous salad.