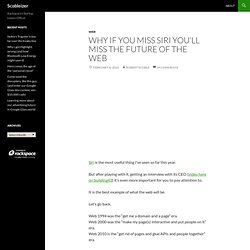 But after playing with it, getting an interview with its CEO (video here on building43) it’s even more important for you to pay attention to. It is the best example of what the web will be. Let’s go back. Leaked Video: Swyping Versus iPhone Typing. (Swype For Android I. A year ago, Swype launched a new way to type on a touchscreen phone at TechCrunch50. 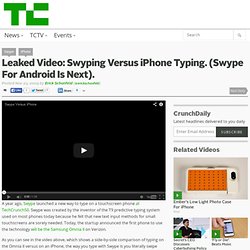 Swype was created by the inventor of the T9 predictive typing system used on most phones today because he felt that new text input methods for small touchscreens are sorely needed. Today, the startup announced the first phone to use the technology will be the Samsung Omnia II on Verizon. Graphic.ly Wants To Blow Your Mind Away With Digital Comics (Vid. Will digital books will ever match printed ones for sheer reading pleasure? 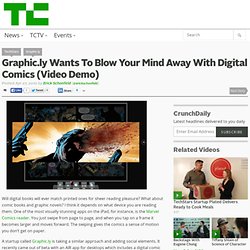 What about comic books and graphic novels? I think it depends on what device you are reading them. One of the most visually stunning apps on the iPad, for instance, is the Marvel Comics reader. Skype to make group video chat the next killer webcam feature. Starting next week, Skype will begin beta testing a new group video chat feature on Windows PCs, according to the Associated Press. 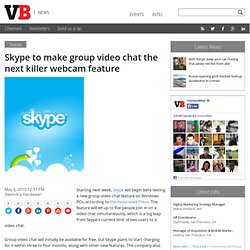 The feature will let up to five people join in on a video chat simultaneously, which is a big leap from Skype’s current limit of two users to a video chat. Group video chat will initially be available for free, but Skype plans to start charging for it within three to four months, along with other new features. The company also plans to bring the feature to Macs later this year. Skype consumer business general manager Neil Stevens said the group video chat feature was one of the most requested by its users. Making email a better place. Leverage Sales Navigator insights anytime you send an email. 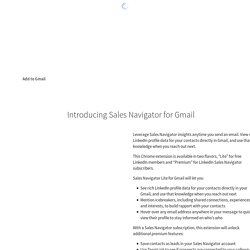 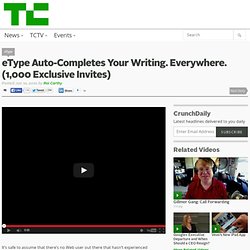 Whether on Google site search and toolbars, Facebook search, or on ecommerce sites like Amazon, auto-complete has become a de-facto usability feature. Its ubiquity means that there’s a very shallow learning curve for users to get accustomed to it when used outside of the browser setting, and that’s exactly what eType is banking on with its auto-complete-as-you-type product. We have 1000 exclusive invites for TechCrunch readers! Get them while they’re hot, here. Swype brings its fast touchscreen keyboard app to all Android ph. What's next in mobile? 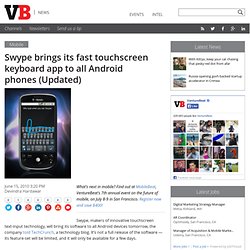 Find out at MobileBeat, VentureBeat's 7th annual event on the future of mobile, on July 8-9 in San Francisco. Register now and save $400! Swype, makers of innovative touchscreen text-input technology, will bring its software to all Android devices tomorrow, the company told TechCrunch, a technology blog. Home - ExtensionFM. Geoloqi Aims to Unlock the Magic of Mobile Location. I want an app that automatically sends me a link to the Wikipedia entry for any historic building I travel nearby. 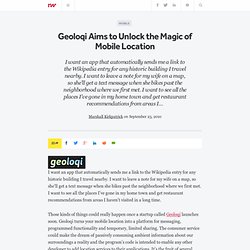 I want to leave a note for my wife on a map, so she'll get a text message when she bikes past the neighborhood where we first met. I want to see all the places I've gone in my home town and get restaurant recommendations from areas I haven't visited in a long time. Those kinds of things could really happen once a startup called Geoloqi launches soon. Geoloqi turns your mobile location into a platform for messaging, programmed functionality and temporary, limited sharing. Pinger Now Turns Your iPod Touch Into A Free Cell Phone.

Earlier this month we took a look at Pinger, the company behind Textfree, a massively popular application for the iPhone and iPod Touch that gives users free, unlimited text messaging. 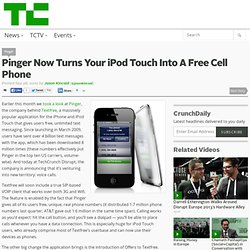 Since launching in March 2009, users have sent over 4 billion text messages with the app, which has been downloaded 8 million times (these numbers effectively put Pinger in the top ten US carriers, volume-wise). And today at TechCrunch Disrupt, the company is announcing that it’s venturing into new territory: voice calls. Textfree will soon include a true SIP-based VOIP client that works over both 3G and Wifi. The feature is enabled by the fact that Pinger gives all of its users free, unique, real phone numbers (it distributed 1.7 million phone numbers last quarter; AT&T gave out 1.6 million in the same time span).

Google Acquires Impressive Touchscreen Keyboard Startup BlindType. Google has just acquired BlindType, a very impressive technology that allows you to type on touch screens without even looking at them. 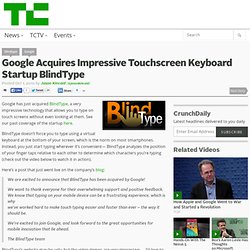 See our past coverage of the startup here. BlindType doesn’t force you to type using a virtual keyboard at the bottom of your screen, which is the norm on most smartphones. 50% Of Android Apps With Internet Access That Ask For Your Location Send It To Advertisers. Be careful what permissions you sign away to your Android apps. A new study suggests that fully half of the most popular apps for Google's mobile OS that access location data are sending it to advertisers without users' consent.

The study, conducted by researchers at Intel, Duke, and Penn State, looked at 30 of the most popular apps which ask for permission to access to the Internet and your phone's location. The researchers found that 15 of them were sending that information on to ad networks, and none of them asked permission or mentioned this practice in their end-user license agreements (EULAs). The study also found some of the apps sending out users' phone numbers or unique device identification codes, also without permission.

Two-thirds of the apps committed at least one of these violations. Winamp Wants To Be The iTunes Of Android; Now Out Of Beta With Wireless Sync. Today Winamp for Android is coming out of beta, a month after its initial launch and more than 500,000 downloads later. The public Android release lets you manage your music downloads on your Android and will offer a couple new features, including wireless syncing over WiFi with Winamp on your desktop computer and the addition of Shoutcast radio stations. (Both Winamp and Shoutcast are owned by AOL, as is TechCrunch). The wireless syncing requires a new desktop version for Windows computers, which is also available today. Winamp is a popular music management software for Windows, with 60 million users predominantly overseas.

In fact, only about 5 percent of its users are in the U.S. Instead, AOL is going to ride the Android wave.