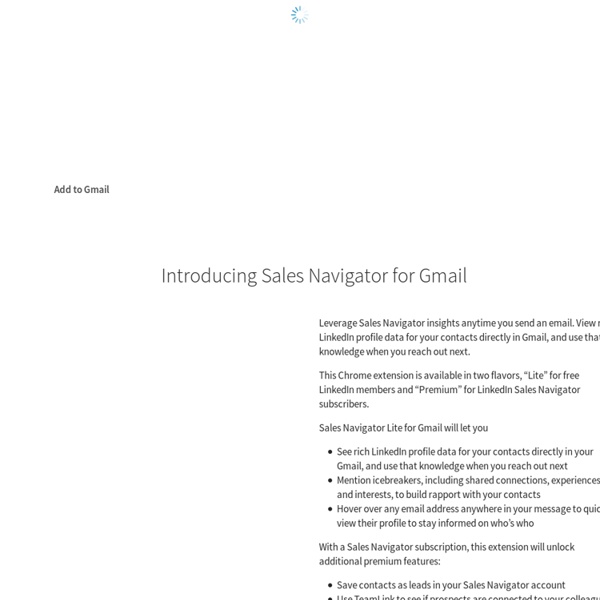 MailTester.com What is it? Here you can enter an e-mail address to verify if it exists of if there are problems with it. A series of checks will be performed on the e-mail address but no actual e-mail is sent. How does it work? Just enter the e-mail address and wait for the test results to appear. There you will see the results of the different checks that are performed: Syntax checkIf the format is incorrect it will be reported why. Mature Vs. Immature Social Media Efforts I’ve been drafting vs. posts for quite some time on a variety of subjects. Today, I thought it would be fun to talk about brands who are mature in social vs. those who are immature. Brands mature in their social efforts are customer-centric and don’t feel a need to constantly hype their own products or services. They understand users will organically make that connection and have a more subtle and useful approach to accomplish it. Brands immature to social prattle on about their own product and are self-centered / brand centric.

Leaked Video: Swyping Versus iPhone Typing. (Swype For Android I A year ago, Swype launched a new way to type on a touchscreen phone at TechCrunch50. Swype was created by the inventor of the T9 predictive typing system used on most phones today because he felt that new text input methods for small touchscreens are sorely needed. Today, the startup announced the first phone to use the technology will be the Samsung Omnia II on Verizon. As you can see in the video above, which shows a side-by-side comparison of typing on the Omnia II versus on an iPhone, the way you type with Swype is you literally swipe your finger from one letter to the next as fast as you can. In the video, the Swypist beats the iPhone typist hands down, so to speak. But the comparison is more illustrative than definitive.

What Would Seth Godin Do Seth Godin advocates using cookies to distinguish between new and returning visitors to your site: “One opportunity that’s underused is the idea of using cookies to treat returning visitors differently than newbies. It’s more work at first, but it can offer two experiences to two different sorts of people.” (Source: In the Middle, Starting) I built this WordPress plugin to implement Seth Godin’s idea. It reduces the “work at first” to almost nothing. Rapportive Connects Gmail Inbox & Address Book Gmail and Google Contacts users no longer need to exit an email message to look up the sender's contact information. Gmail add-on and social intelligence startup Rapportive has an update that connects a user's Gmail inbox to his or her Google address book. Rapportive, the Y Combinator startup that uses the right-hand side of email messages to display the sender's social profiles, Facebook updates, LinkedIn info and the like, can now grab relevant contact details from Google Contacts and display them alongside each email message.

Free Whois Lookup Whois search for Domain and IP Frequently Asked Questions What is a Whois domain lookup? A Whois domain lookup allows you to trace the ownership and tenure of a domain name. Similar to how all houses are registered with a governing authority, all domain name registries maintain a record of information about every domain name purchased through them, along with who owns it, and the date till which it has been purchased. What does the Whois domain database contain? 10 case studies that prove the ROI of social media The question of whether or not social media drives ROI still plagues many marketers and brands. The issue is not always as straightforward as it seems, as there are multiple ways to measure the benefits of social media and it isn't as simple as looking for a direct sales return at one end, with the social media imput at the other. Smart tracking and measuring is needed to fully capture the benefit of a social media campaign and while looking for direct ROI is one way to do it, there are other values to be measure from social media marketing. I've put together a list of case studies that prove the ROI of social media, both through direct monetary return, customer loyalty, repeat traffic and more.

Skype to make group video chat the next killer webcam feature Starting next week, Skype will begin beta testing a new group video chat feature on Windows PCs, according to the Associated Press. The feature will let up to five people join in on a video chat simultaneously, which is a big leap from Skype’s current limit of two users to a video chat. Group video chat will initially be available for free, but Skype plans to start charging for it within three to four months, along with other new features. The company also plans to bring the feature to Macs later this year. Skype consumer business general manager Neil Stevens said the group video chat feature was one of the most requested by its users.

PicFlow, InstaQuote, Repost iPhone Apps for Instagram - Red Cactus Make delightful video slideshows for Instagram Create beautiful text images for Instagram Do more than like it - #Repost it Create handsome collages with your photos First look at future of work: Yammer and Salesforce Chatter have new competition: Convofy At Rackspace we’ve been trying to decide between Yammer and Salesforce Chatter. These systems are like Facebook or Twitter for working with your coworkers. Just when we thought we figured out the new “social enterprise” market along comes Convofy. I tried to be skeptical, but the collaborative features of it are impressive. You’ve gotta watch the video to see what’s different about it.

Boolean Strings It’s not a secret that Google search results are different for different people. (That’s why sharing a “Boolean string” is rarely enough to tell others how you have searched). Results depend on our locations, using Google.com vs. country-based Google, a language (other than English), and other variables. Searching on a mobile device can show different result pages than the desktop, too.

Rapportive: The greatest stalking app you’ve never heard of. (I found out about it from Alexis Grant.) It syncs with your Gmail to show you links to all the social media profiles of whomever you’re emailing. by ivarstimbers Dec 11

I'm happy to see this service available through Gmail. Helps to provide more information in one place. by williamellerbe Sep 30