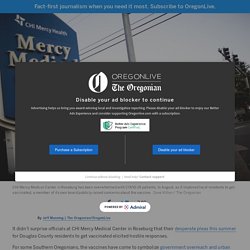 For some Southern Oregonians, the vaccines have come to symbolize government overreach and urban power plays rather than deliverance from a pandemic. What some Mercy officials didn’t expect, however, was for one of the most respected physicians in the region to echo some claims of vaccine skeptics. Last month, Dr. Timothy Powell, CEO of one of the largest medical offices and urgent care centers in the county, issued a stunning manifesto questioning the safety and efficacy of the vaccine -- even as he got the vaccination himself. Powell, who is also a member of the hospital’s board of directors, wrote on his Evergreen Family Medicine blog that the vaccines are less effective and far more dangerous than health officials are claiming. Tennessee Parents Rage After Mask Mandate Discussions at School Show How Little Progress America Has Made.

“A real life look at each of you, to capture all that style,” goes the theme song to the beloved ABC found-footage tragicomedy America’s Funniest Home Videos. 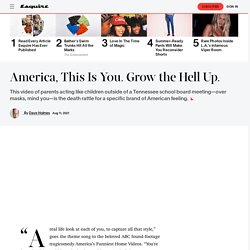 “You're the red, white and blue, oh the funny things you do,” the peppy singer sings, as the squirrel frightens the baby or Grandma face-plants into the birthday cake. And then finally, cruelly, peppily, as the puppy escapes the bath or the party on the dock goes ka-bloop into the lake, “America, America: this is you.” The camera really can reveal our truest selves. It’s a mirror, often a harsh one under unflattering light. This has perhaps never been truer than last night, outside a school board meeting in Williamson County, Tennessee, as a mask mandate was reinstated for elementary school students, teachers, and bus drivers. John Kelly reportedly 'shocked' after Trump refused to stop praising Nazi leader Adolf Hitler. Child Marriage in North Carolina Must End. Worse, North Carolina seems to be attracting child marriage tourism as Kentucky and other nearby states improve their laws. 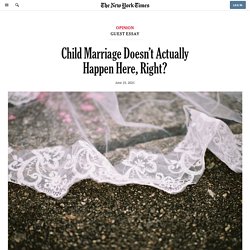 “We’re becoming a sanctuary state for statutory rape,” a county official, Drew Reisinger, told me after refusing to grant a marriage license to a Kentucky couple who could not get one in their home state. The man was 49; the girl, 17. I grew up in the Blue Ridge Mountains of North Carolina, not far from Mr. Life Is Worth Losing - Dumb Americans - George Carlin. 30 Screenshots Of People Who Caught Others Shamelessly Spreading Lies On The Internet And Stepped In To Shut Them Up. Nobody was born BS-proof. 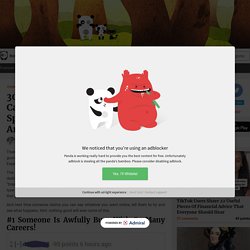 We've all lied, said nonsense, regretted it, or maybe not. Sometimes the nonsense we shared did no harm to us or people around, and sometimes it really paid off. Like, white lies. BOMBSHELL: Rudy's 'Star Witness' Was A Custodian Temp Worker. 2019 was a terrible year for measles. 2021 could be much worse. The last several years have been terrible for measles, the highly contagious — and vaccine-preventable — childhood disease. 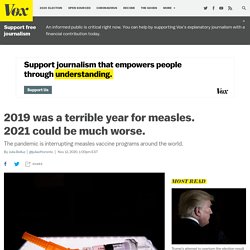 And, unfortunately, because of the Covid-19 pandemic, the next few years are shaping up to be much worse. Measles cases increased by 556 percent globally by 2019 from a historic low in 2016, according to a new Morbidity and Mortality Weekly Report study. Around the world, measles deaths also shot up by nearly 50 percent in that period, to 207,500 last year. Click 2x. 'Traffic jam' on Everest as two more climbers die reaching summit. From a Distance: Geographic Proximity, Partisanship, and Public Attitudes toward the U.S.–Mexico Border Wall - Jeronimo Cortina, 2019.

4-Year-Old Dies From Flu After Anti-Vaxxers Warn Mom Against Tamiflu. On Facebook, anti-vaxxers pushed a mom not to give her son tamiflu. He later died. - AOL News. Facebook groups that routinely traffic in anti-vaccination propaganda have become a resource for people seeking out a wide variety of medical information — including about the ongoing flu season. 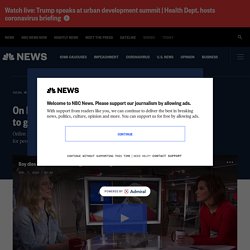 Facebook hosts a vast network of groups that trade in false health information. On “Stop Mandatory Vaccination,” one of the largest known health misinformation groups with more than 178,000 members, people have solicited advice for how to deal with the flu. Members of the group have previously spread conspiracies that outbreaks of preventable diseases are “hoaxes” perpetrated by the government, and use the groups to mass-contact parents whose children have died and suggest without evidence that vaccines may be to blame.

Experts: Samoa's measles outbreak is caused by underimmunisation. Multiple Facebook and Twitter posts claim that the measles vaccine is causing a deadly outbreak of the highly infectious disease in Samoa. 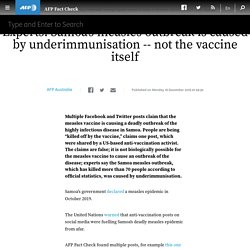 People are being “killed off by the vaccine,” claims one post, which were shared by a US-based anti-vaccination activist. The claims are false; it is not biologically possible for the measles vaccine to cause an outbreak of the disease; experts say the Samoa measles outbreak, which has killed more than 70 people according to official statistics, was caused by underimmunisation. Samoa’s government declared a measles epidemic in October 2019. The United Nations warned that anti-vaccination posts on social media were fuelling Samoa's deadly measles epidemic from afar. AFP Fact Check found multiple posts, for example this one published on Facebook on November 26 by a Hawaii-based anti-vaccine activist, claiming that the measles outbreak in Samoa is due to a mass vaccination campaign.

The lengthy caption states in part: “The vaccine is spreading measles. How a wrong injection helped cause Samoa's measles epidemic. Image copyright Getty Images The number of people killed in Samoa's measles outbreak has reached 53, with almost 4,000 cases reported in total. 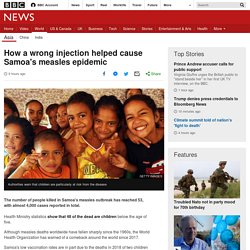 Health Ministry statistics show that 48 of the dead are children below the age of five. 'Germs are not a real thing': Fox News host says he hasn't washed hands in 10 years. Donald Trump’s favourite TV show, Fox & Friends, has a reputation for giving airtime to conspiracy theories that benefit the White House agenda. 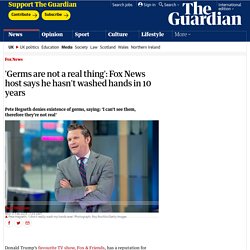 Is 'Fart Rape' an Authentic Feminist Concept? In November 2019, we received multiple inquiries from readers about the concept of “fart rape,” which is widely purported to be an authentic feminist principle. 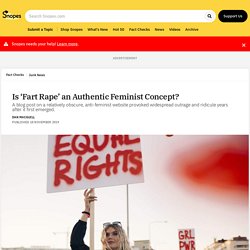 Terminally ill boy exposed to measles by unvaccinated child at CA hospital, mother says. Anti-vaxers’ adult son gets measles; now, he has this message for the world. Mom Slams Anti-Vaxxers After Her 5-Month-Old Baby Gets Measles During Outbreak. The first time you can get the MMR vaccine is at 12-15 months old. Children under that age and people who are unable to get vaccines for medical reasons (eg they are allergic to the vaccine or have a weakened immune system) rely on herd immunity to not get sick. If enough people are vaccinated against a contagious disease (in the case of measles, 95 percent of the population) they create protection for the unvaccinated. This 6-second gif gives a pretty good explanation of how herd immunity works. Protection of the young and the vulnerable relies on others who can get vaccinated doing so. Why “chickenpox parties” are a terrible idea—in case it’s not obvious. Anti vax movement: Russian trolls fueled anti-vaccination debate in U.S. by spreading misinformation on Twitter, study finds.

Russian Twitter trolls have attempted to fuel the anti-vaccination debate in the U.S., posting about the issue far more than the average Twitter user last year, a study out of George Washington University has found. Trump once again requests deep cuts in U.S. science spending. For the third year in a row, President Donald Trump’s administration has unveiled a budget request to Congress that calls for deep spending cuts at many federal science agencies, including a 13% cut for the National Institutes of Health (NIH) and a 12% cut for the National Science Foundation (NSF), while providing hefty increases for the military.