Mr. Trump has selected Mr. Mnuchin, who served as his campaign finance chairman. Mr. Mnuchin, a former Goldman Sachs executive, has deep roots in Hollywood and no government experience

5/1/17: Mnuchin: 'You should all thank me for your bank stocks doing better' Back to (our) Future. There’s compelling evidence to show that Steve Mnuchin, Donald Trump’s pick for Secretary of the Treasury, lied to the Senate in both written and verbal testimony. 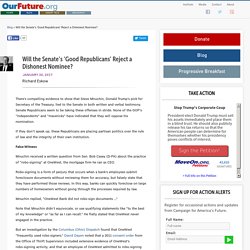 Senate Republicans seem to be taking these offenses in stride. None of the GOP’s “independents” and “mavericks” have indicated that they will oppose his nomination. If they don’t speak up, these Republicans are placing partisan politics over the rule of law and the integrity of their own institution. False Witness Mnuchin received a written question from Sen. CRC Responds to Mnuchin’s Likely Nomination for Treasury Secretary. Upon hearing the news that president elect Donald Trump will likely nominate Steven Mnuchin, former chair of OneWest Bank and board member of CIT Group for Treasury Secretary, Paulina Gonzalez, executive director at the California Reinvestment Coalition released this statement today: “If Mr. 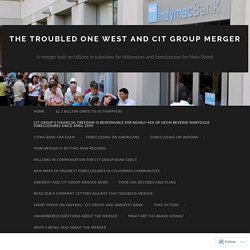 Mnuchin is nominated to the position of Secretary of the Treasury by President Elect Trump it will continue an alarming trend of a series of appointments by Mr. Trump that signals a coming attack on civil rights, working families, and consumer protections by the administration. 12/15/14: Advocacy group protests CIT Group deal for OneWest Bank. National business banking lender CIT Group Inc. stands to collect more than $1.4 billion from federal regulators to cover future losses should its purchase of OneWest Bank in Pasadena be approved. 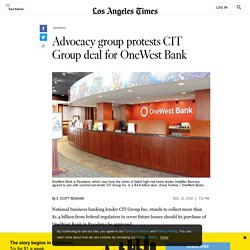 News of the loss coverage, part of a Freedom of Information Act disclosure obtained by the California Reinvestment Coalition, has enraged the public advocacy group as one more major government subsidy in a deal that also is enriching billionaires and top OneWest managers. “This new information confirms that this proposed deal would be subsidized by the government to the tune of nearly $5 billion,” said Kevin Stein, the coalition’s associate director.

Particularly galling to the coalition is that CIT never repaid $2.3 billion in taxpayer bailout funds during the Great Recession, getting the debt wiped out in bankruptcy. The figures on loss-sharing payments were unreported previously. 6/9/15: One West Foreclosures in California Communities. Foreclosures by OneWest BAnk in Ventura, LA, San Bernardino, Riverside and Orange Counties- April 2009 to April 2015. 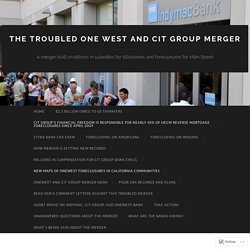 See additional maps below. Los Angeles- CA-June 9, 2015—Today, a statewide coalition called on federal regulators to investigate a disproportionately high number of OneWest Bank foreclosures occurring in communities of color in California. The analysis was based on foreclosures processed since April 2009, when the failed IndyMac Bank was purchased by billionaire investors and renamed OneWest Bank. 8/31/16: Trump’s Top Fundraiser Eyes the Deal of a Lifetime. Foreclosure crisis not over for minorities. (MoneyWatch) As far as foreclosures are concerned, it's still a black and white world. 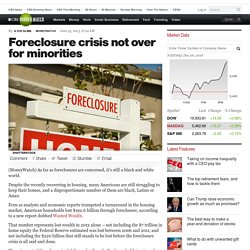 Despite the recently recovering in housing, many Americans are still struggling to keep their homes, and a disproportionate number of them are black, Latino or Asian. Even as analysts and economic experts trumpeted a turnaround in the housing market, American households lost $192.6 billion through foreclosure, according to a new report dubbed Wasted Wealth. That number represents lost wealth in 2012 alone -- not including the $7 trillion in home equity the Federal Reserve estimated was lost between 2006 and 2011; and not including the $220 billion that still stands to be lost before the foreclosure crisis is all said and done. Mnuchin weathers stormy confirmation hearing. The Worst of Wall Street: Meet Donald Trump’s Finance Chairman. Throughout presidential campaign, Donald Trump has criticized Wall Street bankers for their excessive political influence, attacked hedge fund managers for getting away with “murder” under the current tax code, and claimed that he would self-fund his campaign to avoid being beholden to special interests. 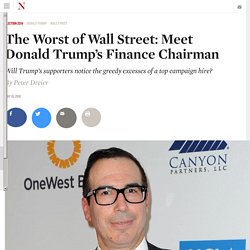 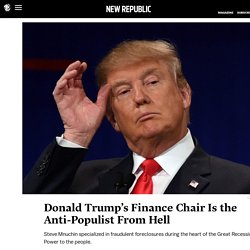 Back in 2011, local housing activists and the Occupy movement in Los Angeles camped out on that lawn to save the home of Rose Mary Gudiel, a La Puente, California, resident who faced eviction after being just two weeks late on one mortgage payment. The activists threatened to move all of Gudiel’s furniture into Mnuchin’s $26 million Bel Air estate if the eviction wasn’t stopped. Twenty police officers and a helicopter met the protesters. Trump Taps Hollywood’s Mnuchin for Treasury and Dines With Romney. The selection of Mr. 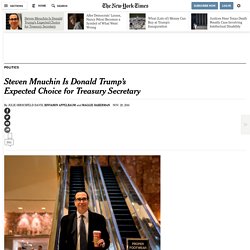 Mnuchin (pronounced mi-NEW-chin) came as Mr. Trump moved on Tuesday to fill the ranks of his domestic policy team with seasoned Washington insiders chosen to help smooth the way in Congress for his two marquee campaign promises: the repeal of Mr. Obama’s health insurance coverage law and the large package to repair infrastructure, which could reach $1 trillion. Mr. Trump also took time Tuesday night to have dinner with Mitt Romney, whose name has been mentioned as a potential secretary of state, and who has become a source of contention among members of the transition team. Mr. Mr. OPEN Graphic. America’s New Dealmakers-in-Chief. When we think of our Treasury secretaries, we imagine a group of august, sober-minded business leaders who combine refined management skills with knowledge of finance and the capital markets. 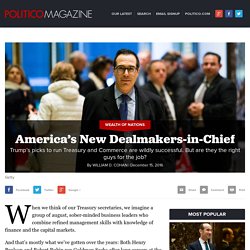 And that’s mostly what we’ve gotten over the years: Both Henry Paulson and Robert Rubin ran Goldman Sachs after long careers at the firm (as a banker in Paulson’s case; as an arbitrageur in Rubin’s case). We’ve had Donald Regan, who ran the mighty Merrill Lynch, and Nicholas Brady, who ran Dillon Read, a small but venerable investment bank founded by Douglas Dillon, who served as Treasury secretary under John F. Kennedy and Lyndon Johnson. MNUCHIN: The US may need 'a 21st century version' of Glass-Steagall. President Franklin Roosevelt at the White House, Washington on August 23, 1935 as he signed the Glass-Steagall Banking Bill. 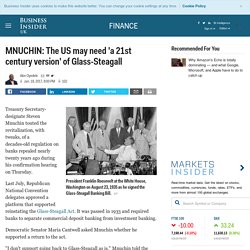 AP Treasury Secretary-designate Steven Mnuchin touted the revitalization, with tweaks, of a decades-old regulation on banks repealed nearly twenty years ago during his confirmation hearing on Thursday. Last July, Republican National Convention delegates approved a platform that supported reinstating the Glass-Steagall Act. It was passed in 1933 and required banks to separate commercial deposit banking from investment banking. Democratic Senator Maria Cantwell asked Mnuchin whether he supported a return to the act.