More of Us, well here we are

12 Worst Wedding Photos Ever. You know what they say—something borrowed, something blue, something old, something that resembles a bridal force field. 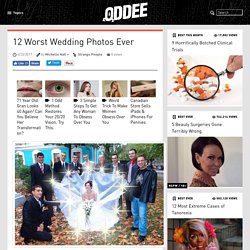 (Photo) Call us crazy, but it looks as though the bride forgot something. (Photo) Relapse Greatest Week Of Man’s Life. Photographer Travels Around The World To Capture The Incredible Beauty Of Red Hair, Photographs More Than 130 Redheads. While redheads have become synonymous with Ireland and Scotland, American photographer Brian Dowling who now lives in Berlin(Germany), photographed over 130 redheads from 20 different countries for his project “Redhead Beauty”. 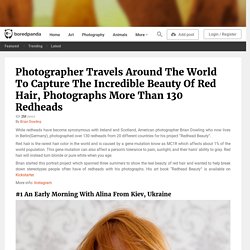 Show Full Text. 10+ People Who Absolutely Don’t Give AF. 10+ Humorous Street Photos From 1950s France By René Maltête. Bizarre hospital images from a very strange cache of Japanese stock photos. Mitschuldig. Women’s Strike A Sobering Reality Check For Subway Masturbator. When This Guy Decided To Get Revenge On A Rude Airline Passenger, He Didn’t Know It Would End Like This. Travelling can be an exhausting and annoying experience on its own, but when snobby passengers are involved… The trip could be especially irritating. 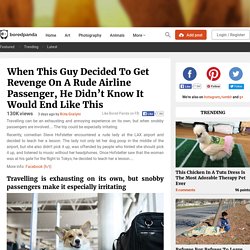 Show Full Text Recently, comedian Steve Hofstetter encountered a rude lady at the LAX airport and decided to teach her a lesson. The lady not only let her dog poop in the middle of the airport, but she also didn’t pick it up, was offended by people who hinted she should pick it up, and listened to music without her headphones. Once Hofstetter saw that the woman was at his gate for the flight to Tokyo, he decided to teach her a lesson… Woman Documents Her Life As Third Wheel In Hilarious Selfies, Becomes Internet Celebrity. ‘Badass Danish girl, 1969…wait for it’ Accused Drunk Driver Does Cartwheels During Sobriety Test. James Fridman. Photoshop Troll Who Takes Photo Requests Too Literally Strikes Again (10+ New Pics) James Fridman (previously here, here and here) shot to fame by editing people's photos to express a satirical view of narcissistic behavior. 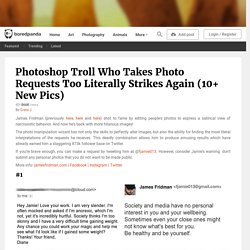 And now he's back with more hilarious images! Show Full Text The photo manipulation wizard has not only the skills to perfectly alter images, but also the ability for finding the most literal interpretations of the requests he receives. This deadly combination allows him to produce amusing results which have already earned him a staggering 873k follower base on Twitter. 10 Shocking Restaurant Receipts. A Kiwi chef in Brooklyn speaks out against Trump's controversial immigration policies A Brooklyn-based chef from New Zealand made his feelings about President Donald Trump's strict immigration policies known by adding a note to the bottom of each receipt that leaves his restaurant. 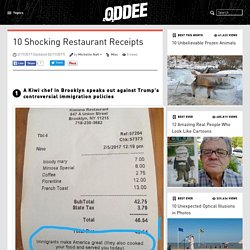 Mark Simmons of Kiwiana Cafe printed the following message on all receipts: "Immigrants make America great (they also cooked your food and served you today). " The message came after Trump's executive order banning immigrants from seven predominantly Muslim nations, sparking outrage and protests the world over. 10+ Of The Worst Selfie Fails By People Who Forgot To Check The Background. 23-Year-Old Student Who Killed 100 ISIS Militants Now Has A $1 Million Bounty On Her Head. 10+ Hilarious Yearbook Quotes That Are Impossible Not To Laugh At. 22-Year-Old Man With Sleep Paralysis Recreates His Nightmares In Photos, And It’s Terrifying. Photographer Nicolas Bruno spends his days like the rest of us, but his nights are very different. 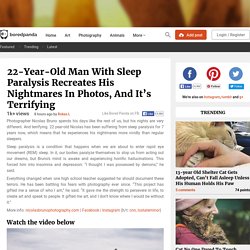 And terrifying. 22 year-old Nicolas has been suffering from sleep paralysis for 7 years now, which means that he experiences his nightmares more vividly than regular sleepers. Show Full Text Sleep paralysis is a condition that happens when we are about to enter rapid eye movement (REM) sleep. In it, our bodies paralyze themselves to stop us from acting out our dreams, but Bruno’s mind is awake and experiencing horrific hallucinations. 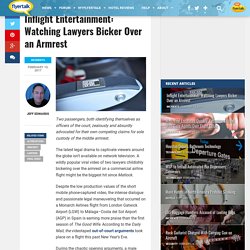 The latest legal drama to captivate viewers around the globe isn’t available on network television. WATCH: 'Drunk And Racist' Man Curses Out 4-Year-Old As He's Booted From Train. 13 Passive Aggressive Acts of Parking Revenge. A Walmart patron parked between spots so nobody could park next to them. 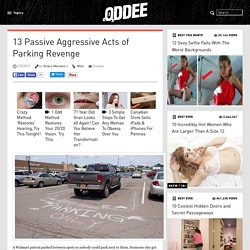 Someone else got revenge without even touching the vehicle—just in case you can't make it out, it says “A**hole Parking Only. " If you ask me, this is a perfect way to get the message across without damaging someone else's property. (Source) (Source) Separated at birth: Pols and their celebrity look-alikes - Photos. Politicians with famous look-alikes. 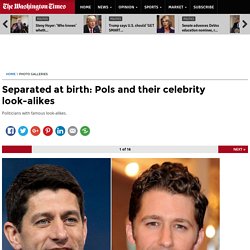 Everybody has a public and a private persona, and celebrities are no exception. 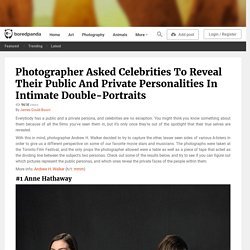 You might think you know something about them because of all the films you've seen them in, but it's only once they're out of the spotlight that their true selves are revealed. Show Full Text With this in mind, photographer Andrew H. Walker decided to try to capture the other, lesser seen sides of various A-listers in order to give us a different perspective on some of our favorite movie stars and musicians. The photographs were taken at the Toronto Film Festival, and the only props the photographer allowed were a table as well as a piece of tape that acted as the dividing line between the subject's two personas. Dad Who’s Been Trolling Daughter By Recreating Her Racy Selfies Now Has 2x More Followers Than Her. Every parent has their own way of raising their kids. Instead of telling his daughter to stop posting sexy selfies on Instagram, Chris Burr Martin thought of something better...

Show Full Text We wrote about the 48-year-old Washington-based father of three previously, showing you how he recreates his daughter's sexy selfies to teach her a lesson. Giant Ship Terrifies Little Girl With Exactly What She Asked For. It's a time-honored tradition to try and get anything with a horn to honk at you. Sometimes it doesn't work, sometimes it does, and then sometimes it works maybe a little too well. In this 2012 video that recently surfaced on Reddit, you'll see an exchange of the third variety. 15+ Of The Funniest Baby Parenting Moments Ever. This Baby Has No Idea She's The Queen Of Dress-Up While She Naps. Son sends mom unusual gift; her response is hilarious. Dalton Ross, a 22-year-old student from Nashville, recently moved to London to study abroad. After getting settled in his new dorm, he realized he hadn't spoke to his mom, Susan Talley, in awhile. Instead of sending her some flowers or a video message, he decided to send her something more memorable.

15 Horrifying Face Swaps. Not as much a face swap as it is a body part swap, but terrifying and funny nonetheless. (Photo) A face swap that lies somewhere between the devil and the deep blue sea. 25+ Of The Worst Facebook Fails Ever. How People Look After 1, 2, and 3 Glasses Of Wine. There's a saying about wine, that "the first glass of wine is all about the food, the second glass is about love, and the third glass is about mayhem", says Brazilian photographer Marcos Alberti.

According to him, the "3 Glasses after [project] started as a joke like a game after hours", during which he photographed his friends after one, two, and three glasses of wine. "The first picture was taken right away when our guests have just arrived at the studio," explains Alberti, "in order to capture the stress and the fatigue after...working all day". This Is What Happens When Average People Copy Celebrity Instagram Accounts.

What happens when average people try to strike the same poses that celebrities make famous on Instagram? Watch A Doctor Performing Human Dissection In The Most Scientific Video Ever. 8 Weird Stories Of Driver's License Photos. The woman who won an appeal to wear a pasta strainer on her head in her driver's license photo. Two 72-oz Steaks Devoured Ridiculously Fast By Mother Of Four. Hold on lady, save room for dessert. Beard Husks On Sidewalk Indicate Start Of Hipster Molting Season. Teens Post Selfies At Auschwitz In Controversial Facebook Group. Maybelline Introduces New Ideal-Woman Rubber Mask To Use In Place Of Makeup. NEW YORK—Touting it as their most stylish and advanced beauty product to date, officials from global cosmetics brand Maybelline unveiled Thursday the Ideal-Woman Rubber Mask, a flexible facial covering that can be worn over the head in lieu of makeup. “Instead of spending hours each morning applying multiple cosmetic products, now women can simply roll out of bed, grab their stunning latex polymer beauty mask that has been molded to accepted standards of female beauty, and stretch it snugly over their face and hair,” Maybelline spokeswoman Jessica Healy said of the one-size-fits-all contoured masks, which designers carefully crafted with rouged cheeks, pouty full lips, high cheekbones, and a small taut chin for maximum physical appeal.

Woman pretends to be drunk and asks for help, is approached by gross men being gross. One Man Spent $150,000 On Cosmetic Procedures To Look Like Kim Kardashian. 99 Creepiest Walmart Shoppers. 10 Weird Aspects Of Hipster Subculture. Marine Spends Weekend Libo On Toilet After 2 Weeks In Field. 15+ People Who Took Laziness To Another Level. Watch 15 Magically Awkward Seconds Roll By While A Man Panics After Accidentally Insulting America.