Music Dance and Film. Data Media/Journalism. Vintage. GOT various. Films - find something to watch. OK, Cumberbatch. Star Wars. Star Trek. Short Films. Film. Airplane! 40th Anniversary Essay - Why No One Knew Airplane Would Be One of the Best Comedies of All Time. Forty years ago, the summer movie season looked like a very different beast than the one we know today. 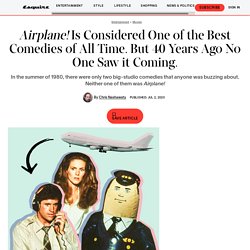 Around the Block: David Zinn’s Quirky Chalk Cartoons Spring to Life in a New Short Film. Joseph Campbell: The Hidden Link Between ‘Star Wars’ and ‘La La Land’ Mythology and the Hero’s Journey became pervasive throughout film culture and history as generation after generation turned to Joseph Campbell and The Hero with a Thousand Faces. 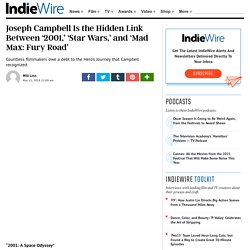 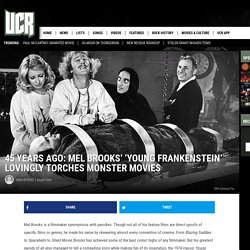 Though not all of his feature films are direct spoofs of specific films or genres, he made his name by skewering almost every convention of cinema. From Blazing Saddles to Spaceballs to Silent Movie, Brooks has achieved some of the best comic highs of any filmmaker. But his greatest parody of all also managed to tell a compelling story while making fun of its inspiration, the 1974 classic Young Frankenstein. John Oliver on Monty Python: 'inspirational idiots who changed comedy'

Writing about the importance of Monty Python is basically pointless. 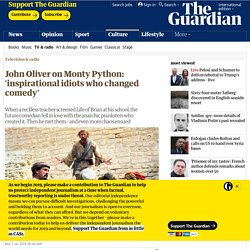 Citing them as an influence is almost redundant. It’s assumed. In fact, from now on it’s probably more efficient to say that comedy writers should have to explicitly state that they don’t owe a significant debt to Monty Python. Animation.

STOP MOTION. The Academy Museum Hayao Miyazaki Exhibit to Open Museum. Hayao Miyazaki is one of the few anime filmmakers who can claim crossover success, with beloved classics like My Neighbor Totoro and Spirited Away leaving an indelible mark on global pop culture (and the latter winning the director a much-deserved Oscar). 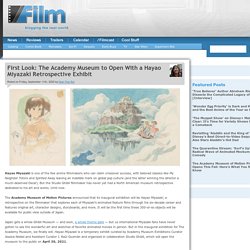 But the Studio Ghibli filmmaker has never yet had a North American museum retrospective dedicated to his art and works. Until now. The Academy Museum of Motion Pictures announced that its inaugural exhibition will be Hayao Miyazaki, a retrospective on the filmmaker that explores each of Miyazaki’s animated feature films through his six-decade career and features original art, character designs, storyboards, and more.

Lights! Cameras! Apollo 11! Director Reveals Inside Look at Epic Moon Landing Documentary. The new documentary "Apollo 11," out in theaters today (March 8), pulls viewers into the historic launch with never-before-seen footage and widescreen views, narrated entirely with broadcasts from the time. 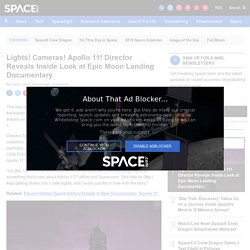 The film was released in IMAX theatres March 1. Director Todd Douglas Miller originally began working with the National Archives' collection for another space-related film, where he had to learn the provenance of a particular moon rock collected during Apollo 17. That led to a short documentary for CNN Films built from Apollo 17 archive footage, but when CNN Films asked about Apollo 11 — the first moon landing — Miller was not interested. In real life people aren't heroic Nighy & Benning click 2x. Bill Nighy would like you to know that he is not a professional agony uncle. 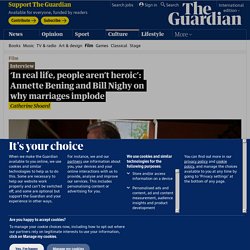 “If I start talking as if I’m an expert on sexual relations, call a cab,” he says, down the phone, from under a tree, familiar drawl mixed with a snort. Same goes if you want to talk about faith. AMKK presents: Botanical animation "Story of Flowers" full ver. Discussion of the Femme Fatale. Academy Museum of Motion Pictures Details: Here's What to Know. “How could there be no film center in the global center of film?” 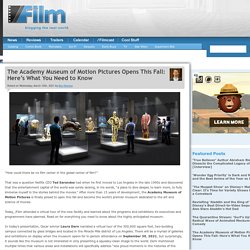 That was a question Netflix CEO Ted Sarandos had when he first moved to Los Angeles in the late 1990s and discovered that the entertainment capital of the world was sorely lacking, in his words, “a place to dive deeper, to learn more, to fully immerse myself in the stories behind the movies.” After more than 15 years of development, the Academy Museum of Motion Pictures is finally poised to open this fall and become the world’s premier museum dedicated to the art and science of movies. Today, /Film attended a virtual tour of the new facility and learned about the programs and exhibitions its executives and programmers have planned. Read on for everything you need to know about the highly anticipated museum. In today’s presentation, Oscar winner Laura Dern narrated a virtual tour of the 300,000 square foot, two-building campus connected by glass bridges and located in the Miracle Mile district of Los Angeles. I Made 25 Dioramas Of Films I Love. Somehow I've ended up making dioramas—miniature worlds in boxes—for a living. 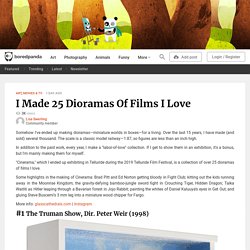 Over the last 15 years, I have made (and sold) several thousand. The scale is a classic model railway—1:87, so figures are less than an inch high. In addition to the paid work, every year, I make a "labor-of-love" collection. If I get to show them in an exhibition, it's a bonus, but I'm mainly making them for myself. (3) Accent Expert Breaks Down 6 Fictional Languages From Film & TV. 'Cowboy Bebop' is 20 Years Old and Better Than Ever. April 2018 marks the 20th anniversary of Shinichiro Watanabe’s anime series Cowboy Bebop. 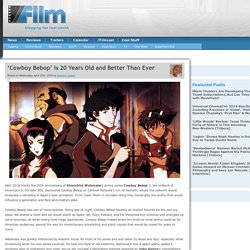 I, like millions of Americans in the late ’90s, discovered Cowboy Bebop on Cartoon Network’s run of Toonami, where the network would showcase a sampling of Japan’s best animation. From Sailor Moon to Gundam Wing they would play the anime that would influence a generation and fans and creators alike. Cowboy Bebop was one of those animes. Airing late at night, Cowboy Bebop became an instant favorite for me and my sister. 'BlacKkKlansman' Shows How White Supremacists Make Language Into a Weapon. The opening scenes of Spike Lee’s new movie, BlacKkKlansman, are in black and white. The movie is a period piece based on the true story of a black man, Ron Stallworth (played in the film by John David Washington), who became the Colorado Springs Police Department’s first black officer in 1972 and then successfully infiltrated the city’s local Ku Klux Klan chapter in an elaborate sting operation.

But this black and white imagery is an effect Lee is using to create the illusion of film from an even earlier era. A conspicuously squarely-dressed man named Dr. The Library of Congress - National Screening Room, Historic Films click2x. Short films. The astonishing documentary Apollo 11 shoots the moon. Most realistic psychopath in film, according to psychiatrists - Business Insider. Orion Pictures Psychopathy, loosely defined, is a combination of cold-heartedness and violence. The most extreme psychopaths may kill without remorse, mutilating victims with as much emotion as you or I might brush our teeth. This is known as "classic" or "idiopathic" psychopathy, but sometimes the disorder is more covert, as with some manipulative smooth talkers who aren't necessarily violent.

In 2014, Belgian psychiatry professor Samuel Leistedt wanted to find out which movie characters embodied psychopathic traits best. Film Studies. Random Movie Facts You Never Knew. 12 Best and Worst Capes (Plus Cloaks! ) 'Absolutely kills me': you pick your saddest movie scenes. This changes everything. Short films. How to create stop-motion animation at home. Stop-motion animation is a visual storytelling form that conjures up the illusion of movement by combining art, motion and metaphor to convey an idea. (3) Movie Accent Expert Breaks Down 32 Actors' Accents. Best And Worst Space Movies, According To The Women Of NASA. Film Reference. From Top Gun to Stand By Me – why the 1980s is my favourite film decade. Movie scenes that nearly killed Jackie Chan. The period piece Project A, in which Hong Kong police team up with the Coast Guard to fight pirates at the turn of the 20th century, is one of the first truly successful distillations of the Jackie Chan formula—pure slapstick comedy by way of blinding martial arts and insane stunt work.

The untold truth of Jackie Chan. Jackie Chan awarded with two new Guinness World Records titles. Panique au village. 87 Deeply Subversive Documentaries That Challenge the Status Quo. By Films For Action / filmsforaction.org/ Jul 19, 2017. The Walt Disney Company. The Walt Disney Company, also known simply as Disney, is an American media and entertainment conglomerate, founded in 1923 by brothers Walt Disney and Roy Disney. [edit] J.R.R. Tolkien about Disney. Oscars: 23 Great Actors Who Still Don't Have a Nomination. [Note: This article was initially published at a prior date, but has been bumped up due to the relevancy of the 90th Academy Awards Nominations.

From Don't Look Now to The Godfather – why the 1970s is my favourite film decade. First, the bad news. Millennials Do Care About Classic Movies, But Need More Exposure to Them. How Guillermo del Toro Made The Shape of Water For Under $20 Million. Summoning A Water God. Auteurs in Best Director Category - click 2x. 'Shape Of Water' Creature Actor Doug Jones Understands The Monsters. Dry Your Tears, Africa - John Williams. 15-Year-Old Deadpool 2 Actor Julian Dennison Can't See His Own Movie. ‘I’ve seen things you people wouldn’t believe’: what Blade Runner 2049’s dystopia tells us about 2017. Animated Movie Posters - IGNANT. This Supercut Will Make You Hungry (The Best-Looking Food in Movies) A Marshall McLuhan expert annotates the Google Doodle honoring the internet visionary — Quartz. Cliff Curtis supercut: Actor plays every ethnicity Hollywood throws his way (VIDEO). The Best of Humans of New York.

Do Not Resist Official Trailer 1 (2016) - Documentary. Tom Cruise Acts Out His Film Career w/ James Corden. The Four Types Of Tom Cruise Movies. 10 WAYS TO USE A WHIP / INDIANA JONES. Ai Weiwei: ‘Without the prison, the beatings, what would I be? The Fascinating Story of How Delia Derbyshire Created the Original Doctor Who Theme. Oscars 2016: 13 Other Academy Awards We'd Like to Hand Out This Year. Mulder, Scully and Jimmy Kimmel in The X-Files. Every Tom Hanks Movie in 8 Minutes (with Tom Hanks and James Corden)

The Nature of Existence. Actor portrayals in biographical films (65 Photos)