AVENGERS: Why Ultron Was Right (And Knew About The Scarlet Witch!) Dancing on the wall. Small Details In Endgame Only True Fans Noticed. Yes, the ending of Infinity War is brutal—but so is the beginning. Small Details You Missed In Captain Marvel. (1) Marvel Theory: This Is Why Doctor Strange Gave Thanos The Time Stone In Infinity War. Stan Lee, the progressive genius: Michel Faber pays tribute to Marvel's mythmaker. In 1969, when I was nine, Stan Lee seemed as good as any writer I’d read. 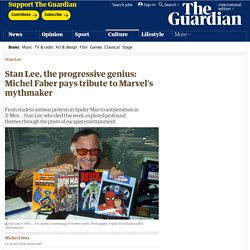 Sure, I could tell that his tendency to puff a Fantastic Four script as “a pulse-pounding pastiche of philosophical profundity” was over the top. (The “p” in “philosophical” wasn’t a proper alliteration, for a start.) Remembering Stan Lee. Marvel Remembers the Legacy of Stan Lee. Stan Lee, Marvel co-creator, is dead at 95. Lee died shortly after being rushed to an L.A. hospital. 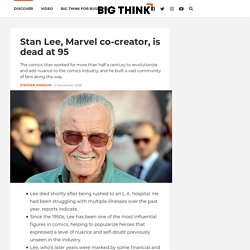 He had been struggling with multiple illnesses over the past year, reports indicate.Since the 1950s, Lee has been one of the most influential figures in comics, helping to popularize heroes that expressed a level of nuance and self-doubt previously unseen in the industry.Lee, who's later years were marked by some financial and legal tumult, is survived by his daughter, Joan Celia "J.C. " STAN LEE _ Every Stan Lee Cameo Ever (1989 - 2018) Marvel. Robert Downey Jr. Improvised the Original ‘Iron Man’ Twist Ending. Marvel/Paramount/Kobal/Shutterstock Robert Downey Jr. is well known for improvising dialogue during his appearances as Tony Stark in the Marvel Cinematic Universe, and it turns out the character’s most iconic line was a Downey Jr. ad-lib. 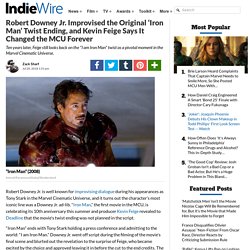 Nothing Was Ever The Same: 10 Comics That Changed The Game click2x. Behold the Manga: Osamu Tezuka's Astro Boy. 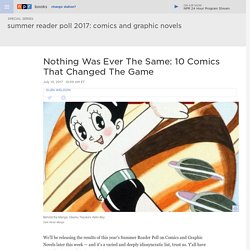 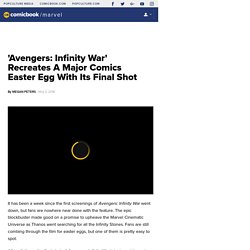 Guardians of the Galaxy Vol 3 plot, cast, release date and everything you need to know. Warning: This article contains spoilers for Avengers: Infinity War. 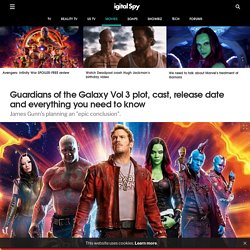 All eyes were on the return of Star-Lord and co in Guardians of the Galaxy Vol 2, and in the wake of its success talk was already turning to a third film. That film is on its way, with writer/director James Gunn back on board and dropping a ton of hints about what might happen in Marvel Studios Phase Four's Guardians of the Galaxy Vol 3. Advertisement - Continue Reading Below. All Marvel movies in chronological order. Complete MCU Recap: Everything You Need to Know Before Avengers: Infinity War. 4-Minute Featurette Details the History of Marvel Studios. 2018 not only sees the release of the highly anticipated culmination event Avengers: Infinity War, but it’s also the 10-year anniversary of Marvel Studios. 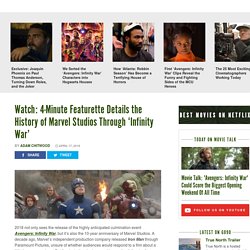 A decade ago, Marvel’s independent production company released Iron Man through Paramount Pictures, unsure of whether audiences would respond to a film about a little-known superhero. But thanks to the charisma and ingenuity of director Jon Favreau, star Robert Downey Jr., and producer Kevin Feige the film was a massive surprise hit, and the Marvel Cinematic Universe was born. AVENGERS INFINITY WAR All Movie Clips + Trailer (2018) Where's Hawkeye in Avengers Infinity War? The Russo Brothers Explain. 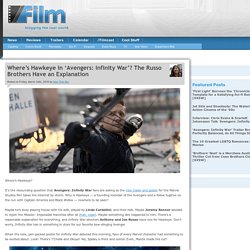 It’s the resounding question that Avengers: Infinity War fans are asking as the new trailer and poster for the Marvel Studios film takes the internet by storm. Why is Hawkeye — a founding member of the Avengers and a fellow fugitive on the run with Captain America and Black Widow — nowhere to be seen? Maybe he’s busy playing house with his wife, played by Linda Cardellini, and their kids. Maybe Jeremy Renner decided to rejoin the Mission: Impossible franchise after all (hah, nope). Maybe something dire happened to him. When the new, jam-packed poster for Infinity War debuted this morning, fans of every Marvel character had something to be excited about.

But there are two superheroes noticeably missing. Six Things Every MCU Superhero Has In Common. Almost nothing about the world and behavior of comic book superheroes as popularly imagined in the Gold and Silver Ages of the medium (i.e. the 3-4 decades during which a solid majority of currently-viable characters were created) makes any kind of logical sense. 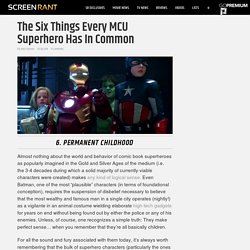 Even Batman, one of the most “plausible” characters (in terms of foundational conception), requires the suspension of disbelief necessary to believe that the most wealthy and famous man in a single city operates (nightly!) As a vigilante in an animal costume wielding elaborate high-tech gadgets for years on end without being found out by either the police or any of his enemies. 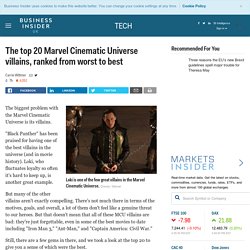 "Black Panther" has been praised for having one of the best villains in the universe (and in movie history). Loki, who fluctuates loyalty so often it's hard to keep up, is another great example. Upcoming DC Movies: From Aquaman to Flashpoint. Image via Warner Bros. Release Date: December 21, 2018 Status: In post-production Director: James Wan Cast: Jason Momoa, Amber Heard, Patrick Wilson, Nicole Kidman, Dolph Lundgren, and Willem Dafoe What We Know So Far: Momoa made his first appearance in Batman v Superman: Dawn of Justice and co-stars in Justice League, but Warner Bros. enlisted Furious 7 and The Conjuring helmer James Wan to direct the Aquaman standalone, and after attempting to fast-track this thing to production with multiple screenwriters writing separate drafts, Wan and DC Films head Geoff Johns convened, nailed down the story, and set Gangster Squad scribe Will Beall to pen the script.

Want to Know More? Movies. Characters (click 2x you will be amazed how many) Stan Lee 1940's. Sacré bleu! Why Franco-Belgian comic-book movies are more fun than Marvel and DC.

Dc. The Surprising Origin Story of Wonder Woman. “Noted Psychologist Revealed as Author of Best-Selling ‘Wonder Woman,’” read the astonishing headline. In the summer of 1942, a press release from the New York offices of All-American Comics turned up at newspapers, magazines and radio stations all over the United States. The identity of Wonder Woman’s creator had been “at first kept secret,” it said, but the time had come to make a shocking announcement: “the author of ‘Wonder Woman’ is Dr. William Moulton Marston, internationally famous psychologist.” Will 'Goddess of Death' Cate Blanchett solve Marvel's female supervillain problem? When it comes to truly splendid villains, there’s nothing like a dame. From Tilda Swinton’s icy, curdled charisma in The Lion, the Witch and the Wardrobe (2005) to Margaret Hamilton’s cackling Wicked Witch of the West in the classic 1939 version of The Wizard of Oz, female baddies are more than capable of holding their own in terms of offering up sheer, undiluted evil.

Which makes it all the more disappointing that there have been so few in the superhero genre. Sure, there’s been the odd juicy role – Michelle Pfeiffer as Catwoman in Tim Burton’s Batman Returns (1992) or Marion Cotillard as Talia al Ghul in Christopher Nolan’s The Dark Knight Rises (2012). But more often than not, Hollywood’s standard approach towards gender comes into play, and the best supervillain parts go to male stars.

Based on Antony Johnson and Sam Hart's graphic novel The Coldest City, Atomic Blonde opens with Lorraine Broughton (Charlize Theron), a MI6 spy, debriefing her superiors about a sensitive mission gone awry. Web Comic: The Syrian Scientist Who Risked His Life For A Chance At His Dream : Goats and Soda. Summer Reader Poll 2017: Comics And Graphic Novels. Graphic- A Bodega Owner Watches Brooklyn Change 2 clicks. Cowboy Bebop Movie Opening. Neil Gaiman on Will Eisner: 'He thought comics were an artform – he was right' It isn’t yet easy or comfortable for me to write about Will Eisner.

He was too important, and writing this reminds me how much I miss my friend Will Eisner.