‘WandaVision’ EP Jac Schaeffer On Who Didn’t Show Up & Why In “The Series Finale” Marvel's next wave of heroes will tear up tradition in the name of progress. If there was anything guaranteed to rile the anti-woke brigade, it ought to be the news that Superman could soon be black on the big screen, just as a woman takes on the mantle of Thor. 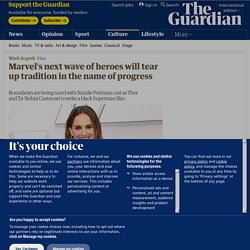 And yet, what’s that we hear rumbling through the cosmos like space tumbleweed, but the sound of (relative) silence? Apart from a few minor Twitter grumbles when it was announced at Comic-Con 2019 that Natalie Portman was to take on the role of Marvel’s thunder god, there has been very little in the way of backlash – certainly nothing like the horrible behaviour dished out to Kelly Marie Tran for daring to sign up to Star Wars, or to Leslie Jones for appearing in the all-female Ghostbusters remake. Nor have the trolls really begun to target reports that acclaimed essayist and novelist Ta-Nehisi Coates will pen a new film about the man of steel for Warner Bros that is expected to feature a black version of Kal-El. 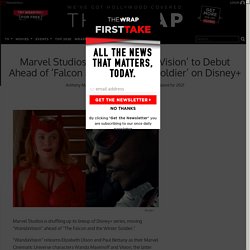 Zendaya, the youngest person to win the Outstanding Lead Actress in a Drama Series award, is also only the second Black actress to claim the title after Viola Davis for “How to Get Away With Murder.” PsBattle: Robert Downey Jr. with his fellow cast members : photoshopbattles. Superheroes and freaky cats: how Captain Marvel rewrote the rules.

If there’s one thing we should have been primed for, prior to viewing Captain Marvel, it would be to expect the unexpected. 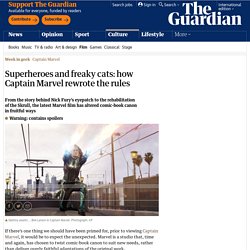 Marvel is a studio that, time and again, has chosen to twist comic-book canon to suit new needs, rather than deliver overly faithful adaptations of the original work. The addition of the Skrull, a race of alien shape-shifters, to the Marvel universe, prompted predictions that we may ultimately see storylines riffing on the 2008 Secret Invasion storyline, in which various members of the Avengers are replaced by extraterrestrial interlopers. In the comics, the Skrull are usually evil and often bent on invading Earth and taking it for themselves. (1) Small Details You Missed In Captain Marvel. Marvel Cinematic Universe movies ranked from worst to best - Business Insider. 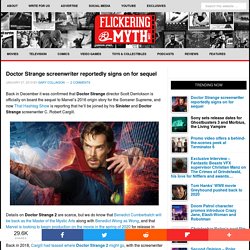 Superhero Origins: Black Widow. Goddesses of the galaxy: women directors take over the blockbuster universe. Move over, Avengers: female directors and screenwriters have been assembling their own super-squad, spreading their powers across major movie franchises as they reshape Hollywood’s image of a blockbuster – and who can make one. 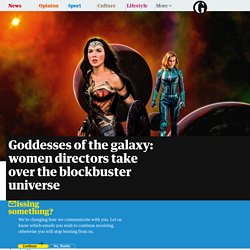 Captain Marvel, out next year, will be the Marvel franchise’s first female-led blockbuster by every rubric: Oscar-winner Brie Larson stars, six of the seven screenwriters are women, and co-director Anna Boden is the series’ first female director to see an entire film through. (Patty Jenkins was hired, then fired, from Thor 2: The Dark World in 2011, before breaking box-office records with last summer’s Wonder Woman.) Avengers 4 trailer: five things we learned about Marvel's Endgame movie. For a mega-blockbuster that had one of the most convoluted build-ups in the history of cinema, Avengers: Infinity War opted to end on one of the biggest audience bummers since The Empire Strikes Back. 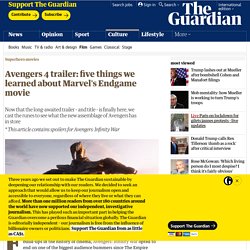 Spoiler warning: big purple bad dude Thanos succeeded in wiping out literally half of the entire universe, including a considerable proportion of the Marvel heroes fans had grown to love over the course of an eventful movie-going decade. So where do you go from there? Today’s new trailer for Avengers: Endgame has a few suggestions, squashed into two and a half minutes. Here’s what we learned. Tony Stark is bad at voicemails After getting his tin-can ass kicked by Thanos and witnessing his cosmic strike team of impromptu Avengers disintegrate into confetti on a far-flung moon, Tony Stark was in a bad place. 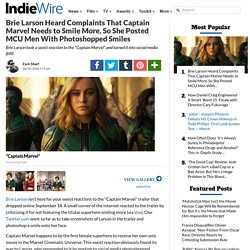 A small corner of the internet reacted to the trailer by criticizing it for not featuring the titular superhero smiling more (via Vox). One Twitter user went so far as to take screenshots of Larson in the trailer and photoshop a smile onto her face. Jake Gyllenhaal could be magic as Marvel's Mysterio, the ultimate outsider. From the moment he emerged, seemingly fully formed, into the searing spotlight of the public eye in the cult Richard Kelly fantasy Donnie Darko, Jake Gyllenhaal never quite seemed cut out for the Hollywood heart-throb mould. 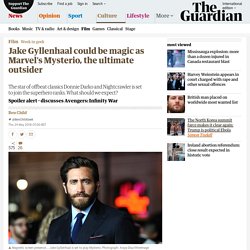 There have been efforts to recast the actor as a smouldering, musclebound action hero since that spiky early foray into the heart of post-pubescent darkness – conspicuously, if not memorably, in 2010’s Prince of Persia: The Sands of Time. But he has always seemed more comfortable – certainly more watchable – playing offbeat outsiders such as Darko, Nightcrawler’s sociopathic stringer Lou Bloom and Okja’s screwball TV zoologist Dr Johnny Wilcox. Lost action hero: blockbusters used to fight capitalism – now they embrace it. Action films in the 80s and 90s were a special breed. 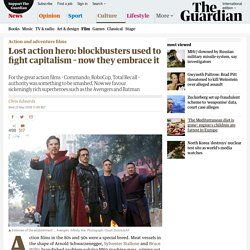 Meat vessels in the shape of Arnold Schwarzenegger, Sylvester Stallone and Bruce Willis brandished problem-solving M60 machine guns, wiping out scores of faceless goons and dropping devastating puns while doing so. Half of this would happen in slow-motion, illogical explosions would go off at random, and there would almost definitely be a car chase that cost two-thirds of the film’s entire budget. 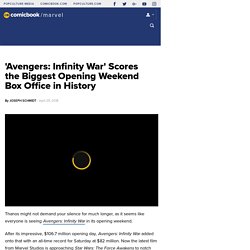 What We Know So Far: The comics character made quite the impression with his first appearance in Captain America: Civil War, and he gets his own feature film not long after. 42 star Chadwick Boseman is filling the role of the powerful native of Wakanda, an African nation that is isolated from the rest of the world. The story of Black Panther will find T’Challa returning to his technologically advanced homeland of Wakanda after the events of Civil War, only to find himself drawn into a dangerous conflict with an old enemy. Infinity Stones Explained: Where They Are in the MCU. Originally introduced as The Tesseract in Captain America: The First Avenger (although technically it first appears in the post-credits scene of Thor), the Space Stone has the power to all interdimensional space travel.

While Red Skull used the power of the Tesseract to create super-powered weapons for Hydra, Loki used the Tesseract to open a portal, which allowed the Chitauri to attack New York City in The Avengers. Thor: Ragnarok Review. With Marvel properties, as with Betelgeuse, third time’s always the charm. Each hero starts with a carefully pitched origin story; then comes a sequel to jack up the stakes. It’s not until part three that a series is given free rein to cut loose, let its hair down and be a little reckless. Cap set the MCU high-water mark battering his friends in Civil War, while Marvel found its most personal — and subversive — story in Shane Black’s Iron Man 3. Immigrant Song. Intel sends hundreds of drones over L.A. to celebrate the home release of Wonder Woman. 25 Best Superhero Movie Trailers of All Time, Ranked.

The trailer is an art form of its own, a short film designed to make would-be viewers want to see an upcoming movie. When it comes to movies based on already existing source material — i.e. the superhero film — trailers can be even more important, as they give fans an idea of what kind of adaptation they are in for. Upcoming New Superhero Movies: 2017-2021 Release Dates. Release Date: November 17, 2017.

Great-portrayals-comic-book-characters 2 clicks. 12 Movies to Watch After You See ‘Guardians of the Galaxy Vol. 2’ Continue the fun with some slightly relevant recommendations. Wonder Woman director Patty Jenkins: ‘People really thought that only men loved action movies’ At a sunbaked studio lot in LA’s Culver City, a table laden with red and blue cake pops styled with miniature fondant headbands is drawing smiles: superheroes, in small and edible form. They are tiny and temporary (gone in a gulp), which is especially pleasing when you accept them for what they are – homage to something huge and potentially lasting. Wonder Woman Actor Says Chief Is Actually a Demi-God. 10 Marvel Superheroes Who Are More Powerful Than You Realize.

10 Superhero Actors Who Didn't Need To Fake It On Screen.