BBC Arts - BBC Arts - Picture perfect: Cinema's best scenes selected by Lost in Translation director Sofia Coppola. Here's Why Movie Dialogue Has Gotten More Difficult To Understand (And Three Ways To Fix It) The 100 Best Film Noirs of All Time. Since its coining in 1946 by French critic Nino Frank, who observed from afar something dark, quite literally, going on at the American cinema, the term “film noir” has been debated and debated and debated some more. 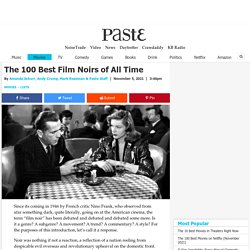 Is it a genre? A subgenre? A movement? Short Doc about a trio of Foley Artists and How Movie Sounds are Made. Camera Movement of Wings’ (1927) Party Scene. How Pixar Uses Hyper-Colors to Hack Your Brain. Glossary for Film Production Assistant. SAG-AFTRA The Screen Actors Guild - American Federation of Television and Radio Artists is an American labor union representing approximately 160,000 film and television actors, journalists, radio personalities, recording artists, singers, voice actors, and other media professionals worldwideScript - The written text of a stage play, screenplay, broadcast or speech. 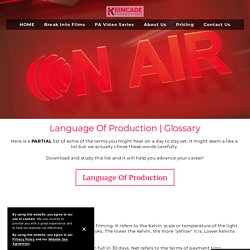 On March 30, 2012, it was announced that the members of AFTRA and of the Screen Actors Guild had voted to merge and form SAG-AFTRA Schedule A - Day performers. This person is hired for only one day or a specific number of days of work. Schedule B and C - Schedule B and C are freelance weekly performers. Script Supervisor - This person is in charge of making sure that the entire script gets shot. Ray Harryhausen. Ray Harryhausen. Don't miss our Ray Harryhausen: Titan of Cinema Virtual Exhibition Experience, a carefully curated package which includes a series of films, never-seen-before interviews, exhibition footage, film clips and specially created animation sequences which demonstrate Harryhausen’s innovative processes. 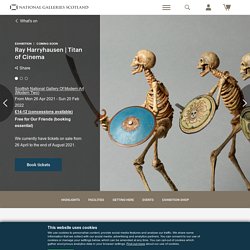 Book now. Film special effects superstar Ray Harryhausen helped elevate stop motion animation to an art. His innovative and inspiring films, from the 1950s onwards, changed the face of modern movie making forever. Trick of the Light: Cinematography in Silent Films (1896-1927) How Silent Movie Special Effects Were Done. 10 Revolutionary Breakthroughs in Animation History. In rough chronological order, you will see how these ten animation breakthroughs were so revolutionary, that many of the techniques were still used decades later. 1. 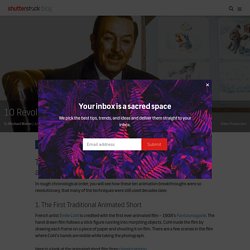 The First Traditional Animated Short French artist Émile Cohl is credited with the first ever animated film – 1908’s Fantasmagorie. The hand drawn film follows a stick figure running into morphing objects. Cohl made the film by drawing each frame on a piece of paper and shooting it on film. Here is a look at the animated short film from classiccartoon. Accent Expert Breaks Down 6 Fictional Languages From Film & TV. Movie Accent Expert Breaks Down 32 Actors' Accents. One perfect shot: the unsung power of cinematography. Cinematography is one of the most mysterious aspects of film-making. 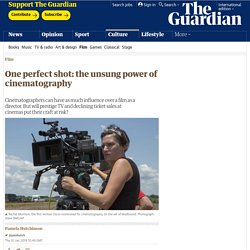 The American Society of Cinematographers turned 100 this month and, though last year’s Oscar for the category drew attention after the first nomination for a female cinematographer, and Twitter users reguarly share examples of “One Perfect Shot”, the art of “painting with light” is little understood. Cinematographers are responsible for photographing films, but in practice their job is more complex. The skill of the cinematographer, or director of photography, is to combine visual artistry with technical knowledge and a certain amount of people management. How Peter Jackson Made WWI Footage Seem Astonishingly New. How Lord of the Rings used forced perspective shots with a moving camera VIDEO] Top 10 Cinematographers of All Time. The Evolution of Greenscreen Compositing. Ingmar Bergman makes a movie (english subtitles) 'Mission: Impossible — Fallout' Makes Aging Action Franchises Look Bad. James Wong Howe. James Wong Howe, A.S.C. 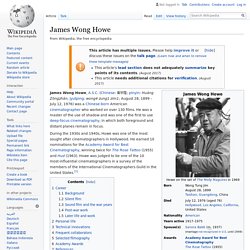 (Chinese: 黃宗霑; pinyin: Huáng Zōngzhān; Jyutping: wong4 zung1 zim1; August 28, 1899 – July 12, 1976) was a Chinese-born American cinematographer who worked on over 130 films. He was a master of the use of shadow and was one of the first to use deep-focus cinematography, in which both foreground and distant planes remain in focus. Career[edit] Background[edit] Silent film[edit] Casting - GOT to the Crown Nina Gold click 2x. Why see Dunkirk in IMAX 70 MM, explained. (VIDEO) Simple Lines Reveal the Brilliant Compositions of Iconic Film Scenes. Each frame of a film is like a blank canvas for a cinematographer, offering them a new opportunity to create a dynamic composition. 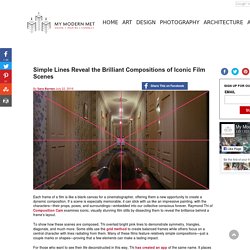 If a scene is especially memorable, it can stick with us like an impressive painting, with the characters—their props, poses, and surroundings—embedded into our collective conscious forever. Raymond Thi of Composition Cam examines iconic, visually stunning film stills by dissecting them to reveal the brilliance behind a frame’s layout. To show how these scenes are composed, Thi overlaid bright pink lines to demonstrate symmetry, triangles, diagonals, and much more. Some stills use the grid method to create balanced frames while others focus on a central character with lines radiating from them. Film Compositions Are Dissected to Show the Brilliance of Iconic Scenes. The Shining Last year, Raymond Thi reignited our appreciation for film cinematography. 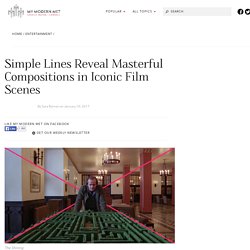 Through his app, Composition Cam, he highlighted the brilliant arrangements of memorable scenes in iconic movies like The Shining, Ghostbusters, and Citizen Kane. Thi has recently expanded his idea by examining even more visually stunning film and TV compositions. Loving Vincent Animated Film Features 62,450 Hand-Painted Frames. The animated film Loving Vincent is one that’s nearly six years in the making. 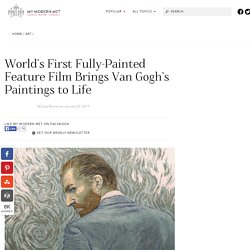 If that seems excessive, just wait until you find how it’s made. The movie, which examines the life of post-Impressionist artist Vincent van Gogh, uses hand-painted canvases to bring its action to life. It takes 12 oil paintings just to create one second of footage! Uncovering the real pioneer of filmmaking. For more than a century, Thomas Edison and the Lumiere brothers of France have been celebrated as the creators of motion pictures. 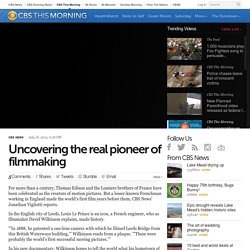 But a lesser-known Frenchman working in England made the world's first film years before them, CBS News' Jonathan Vigliotti reports. In the English city of Leeds, Louis Le Prince is an icon, a French engineer, who as filmmaker David Wilkinson explains, made history. "'In 1888, he patented a one-lens camera with which he filmed Leeds Bridge from this British Waterways building,'" Wilkinson reads from a plaque. "'These were probably the world's first successful moving pictures.'" Silent Film Effects Showcase the Brilliant Ingenuity of Early Movie Making. Long before CGI and the green screen, silent filmmakers were incorporating astounding visual effects into their work. These ingenious techniques didn’t rely on digital tools, as there were none at the time. Instead, to surprise and delight viewers, silent film effects used elements like trick perspective, hidden pulleys, and filter adjustments to make the magic happen.

How Orson Welles changed cinema. The CG Actors in ‘Logan’ You Never Knew Were There. While Hollywood has been relying on digital doubles for many years, the work in Logan is particularly seamless, even if the scenes are relatively brief and do not involve an avatar delivering any dialogue. It’s perhaps another example of where things are headed with digital actors and how they can be used to help tell the stories directors are wanting to tell. Cartoon Brew sat down with the studio behind the digital Hugh Jackmans and Laura, Image Engine in Vancouver, who worked under overall vfx supervisor Chas Jarrett, to discuss how the the cg ‘digi-doubles’ were brought to life. After being given the task of re-creating cg heads for Keen and Jackman, Image Engine’s team immediately knew what it was up for.

“Everyone knows Logan, for instance, and that’s the biggest challenge,” Image Engine visual effects supervisor Martyn Culpitt told Cartoon Brew. “We’re literally looking at a real Hugh and a digital Hugh side by side in some shots.” Quentin Tarantino's Visual References. 40 Stunning silhouette shots from various films. 'Light Field' Movie Camera Could Revolutionize Film Production. In Brief Lytro is releasing a new product that promises to make the lives of those in the television and film industries easier, with cool camera technology for cinema that uses the company's signature light field technology.The Lytro Cinema camera promises some staggering specs: a 755 RAW megapixel 40K resolution, 300 FPS, the ability to take in as much as 400 gigabytes per second of data. Playing with light. Geometric Shots. How the match cut is used in film, explained (VIDEO).

Film shots and the paintings they reference side by side (VIDEO). Reels of classic films were melting into goo; David W. Packard stepped in to save them. If you care even a little about the art and history of American motion pictures, about being able to see classic films now and forever, you owe a debt of gratitude to David W. Packard. Packard, the son of Hewlett-Packard co-founder David Packard, has never seen a Steven Spielberg movie and takes pleasure in reading Homer in the original Greek. But he cares deeply about film history, and his Packard Humanities Institute has become one of the leading philanthropic organizations funding film preservation. Method Studios Comes Up Big by Going Small on ‘Ant-Man’ Marvel's ‘Ant-Man.’ All images © 2015 Marvel. Day of the Dead parade in Mexico City shows how James Bond and "Spectre" changed centuries of Mexican culture — Quartz.

Pre Vis Action. Books in the Films of Wes Anderson: A Supercut for Bibliophiles. The Directors Series - The Coen Brothers [4.5] The Filmmakers And Subjects of "The Eagle Huntress" Discuss The Documentary. A look inside the editing timelines of feature films.