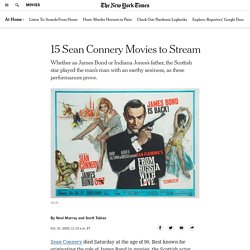 Best known for originating the role of James Bond in movies, the Scottish actor had a career that lasted nearly 60 years, most of which he spent playing a variety of “man’s man” roles — from suave spies to violent brutes. At a time when most popular British thespians were known as Shakespearean-trained aesthetes, Connery became an international star with a screen presence that was earthier and sexier.

His musical highland burr and awe-inspiring physicality immediately drew eyes and ears, even when he was playing opposite some of the most accomplished and attractive performers of his generation. These 15 movies go beyond Bond (though there a couple of can’t-miss 007 adventures in there) to illustrate how Connery commanded the screen, from his roguish youth to his distinguished latter years. Top 10 Gene Wilder Performances.

2005: The wilder side of Gene Wilder. Andre the Giant sitting on top The Rock's grandfather Peter Maivia, 1970s : OldSchoolCool. I'm mad as Hell and I'm not going to take this anymore. Then and Now Celebrity Photos of Stars Hanging Out With Younger Selves. Should we be surprised by John Wayne's racist and homophobic views? King of kitchen sink - Albert Finney: a life in pictures. UF GATORS. Fresh Prince of Bel-Air - Will's Father leaves. Nicolas Cage Gave a Career-Defining Performance in “Matchstick Men” O Brother, Where Art Thou (2000) Show scene. Finally, an enemy James Bond can’t escape – the 21st century click 2x. The new James Bond film is in trouble, again. 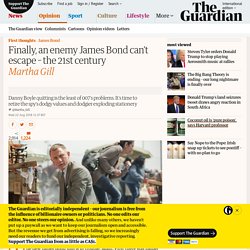 Paul McCartney Carpool Karaoke. Jane Fonda: ‘I’m 80! I keep pinching myself. I can’t believe it!’ Jane Fonda has ruined me. 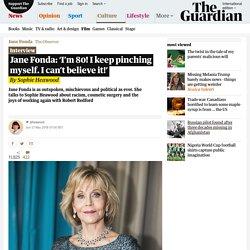 I never want to interview anyone under the age of 80 again. Specifically, I never want to interview anyone who isn’t 80, and who doesn’t phone me for a catch-up call from a limo in Cannes, in which they are being driven to the airport, having gone to a deeply glamorous film festival party the night before and now finding themselves, as Fonda puts it delicately, “slightly hungover”.

Fonda isn’t even hugely interested in Cannes these days, not like back in the day “when people wore their own clothes and went there to talk about movies”. No, she’s hungover in the limo, but wants to talk about the Black Lives Matter movement; about what she has recently learned of the mass incarceration of African-Americans in her country and how it isn’t enough for white women like her to be empathetic.

They have to stand up and make this stop, because America is a country built on slavery and it isn’t over yet. The tragic romance that shaped Meryl Streep’s life. In 1978, a young Meryl Streep was on the verge of becoming the greatest actress of her generation. 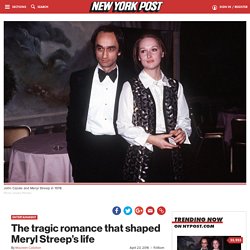 She was also about to lose the love of her life. “She doesn’t talk about it much,” says Michael Schulman, who explores this time in his new biography “Her Again.” “But that year was so wildly eventful and dramatic in her life. Judi Dench, everything you need to know - infographic. Rita Hayworth Is Stayin' Alive. 66 (Old) Movie Dance Scenes Mashup (Mark Ronson-Uptown Funk ft.Bruno Mars) Jackie Chan's as fast as lightning. In fact, it was a little bit frightening. Fatboy Slim feat Christopher Walken - Weapon Of Choice [full version dvd quality] 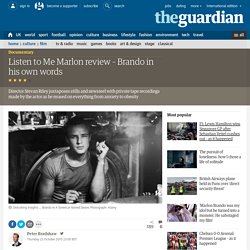 (He would address himself: “Listen to me, Marlon …”) That unmistakable voice becomes a distinctly Kurtzian commentary for his own life, which director Stevan Riley juxtaposes with stills, newsreel material and interviews. At the beginning and end, Riley even uses a digital “map” that Brando had once made of his face and that extraordinary Roman head to animate readings. The result is a disturbing Max Headroom-ish seance, like a sci-fi movie about a secret plan to keep Brando alive.

Marlon Brando shows his wiener (1949) Harry Dean Stanton: gentleness, sensitivity, gallantry and painful masculinity. It took a German director to notice one of cinema’s most iconic American faces: in 1984, when this actor was 58 years old. 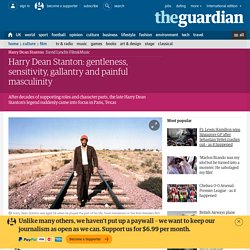 He had been there all along. After decades of supporting roles and character parts, playing opposite the big stars and loyally showcasing their grandstanding with his own calm stillness and occasionally with his own beautiful singing voice, Harry Dean Stanton had become craggily gaunt in his ascetic handsomeness, like some Bergmanian pastor or the farmer in Grant Wood’s painting American Gothic. Fear and Longing in the Outback: Peter Weir’s Nostalgic Australian Cinema. In celebration of one of the most prominent directors of Australian New Wave, we dissect two of Peter Weir’s iconic films, determining their value as both Australian classic and cinema of the world. 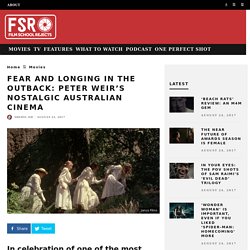 Peter Weir has turned 73. Renowned for his international productions like Dead Poets Society (1989) and The Truman Show (1998), his home-grown claim to fame is perhaps even more striking. As a leading figure in the Australian New Wave cinema movement of the 1970s and 1980s, much of the film industry – local and worldwide – remains influenced by his work. Lucille Ball plays Charlie Chaplin (with Vivian Vance) - Rare video. Buffy the Vampire Slayer at 20: the thrilling, brilliant birth of TV as art. “If the apocalypse comes, beep me.” 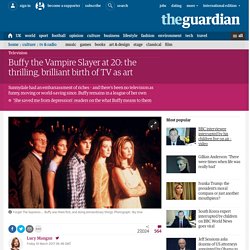 Twenty years on, the brilliance of Joss Whedon’s funny, tragic seven-season synthesis of most film and TV genres, literary conceits and pop cultural tropes remains undimmed. Buffy Summers’ apocalypse-averting adventures in Sunnydale began in 1997. The show was based on a film not many people saw and which got mostly bad reviews from those who did. 'Becoming Cary Grant' Reveals The Self-Invention Of A Hollywood Icon. The new Showtime documentary Becoming Cary Grant traces the actor's journey from working-class England to Hollywood stardom. 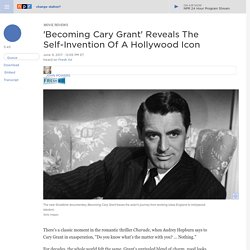 “I started thinking about the housing crisis and all these people who had signed contracts not knowing what the ramifications of those contracts would be, and all the trouble it got us into,” Dawidziak says in Episode 246 of the Geek’s Guide to the Galaxy podcast. 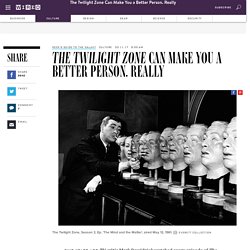 Podcast Audio Player That thinking eventually led to his new book Everything I Need to Know I Learned in the Twilight Zone, which contains 50 life lessons drawn from classic episodes of the anthology series. When Harry met Sally - Happy End. Deliverance's Infamous Rape Scene, Explained. Harrison Ford by a fireplace in 1981. The meaning of Clint: what watching 40 Eastwood films has taught me. Clint Eastwood occupies the same position in pop culture that Keith Richards does: he has been around for ever; he has done tons of amazing work; he embodies the rebellious, iconoclastic spirit of the mid-60s; and he has never sold out and become a joke like just about everyone else in his generation. Even timid, self-effacing men who have never fired a gun, much less puffed on a stogie, secretly wish that they could just once sport that filthy poncho, bite down on that cigarillo and fill the streets of Laredo with lead.

When push comes to shove, Eastwood, the original rock-star cowboy, can always fall back on the statement: “I’m Clint Eastwood, and you’re not.” So there. A newly released box set, Clint Eastwood: 40 Film Collection, provides a perfect opportunity to assess the star’s remarkable career both as an actor and as a director. Eastwood has starred in or directed roughly one movie a year for the past 53 years. Nor does Eastwood like suits.