Doctoring the Ladies. What is 'Leaning In'? If you've paid any attention to business in the last few years, it's likely that you've heard a lot about leaning in. 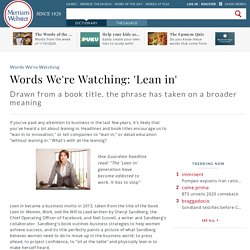 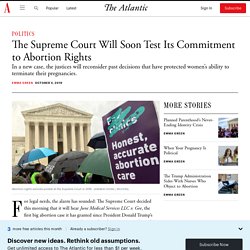 This was the basis for a reversal, in favor of Louisiana: The Fifth Circuit Court—which, legally speaking, is not supposed to do its own fact-finding—asserted that it did not have to follow the Supreme Court precedent in Whole Woman’s Health, because this Louisiana case was substantively different and appropriately protected women’s health. Read: When your pregnancy is political.

Is There Room for Men in the Abortion Debate? Indeed, when Matt Garbett concluded his Twitter thread about the lack of men’s participation in support of abortion rights, men responded to his call with concerns about whether he would be welcome in such a heavily female environment. 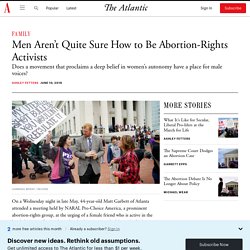 “Admittedly,” one tweeted, “I don’t know where I would be the most useful nor do [I] want my presence at events to be [a] problem for others,” he wrote. So rather than attend rallies or participate in organized efforts, he wrote, he simply donates money to the cause. Amelia Bonow—a co-founder of Shout Your Abortion, which encourages people to talk about their pregnancy termination with the goal of normalizing and humanizing the practice—has been thinking about men’s role in the abortion conversation a lot lately.

After nearly four years of facilitating ways for people who have had abortions to share their stories publicly, Shout Your Abortion “has shifted,” she told me. “I’ve seen all these signs that are like, you know, No uterus, no opinion,” she said. Even if Roe is upheld, abortion opponents are winning. Abortion is still legal in the United States, but for women in vast swaths of the country it’s a right in name only. 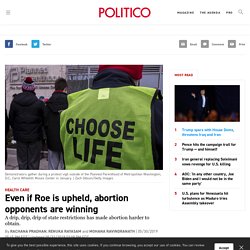 Six states are down to only one abortion clinic; a court stepped in Friday to stop Missouri’s sole clinic from closing, at least for now. Some women seeking abortions have to travel long distances, and face mandatory waiting periods or examinations. On top of that, a new wave of restrictive laws, or outright bans, is rippling across GOP-led states like Alabama and Georgia. Story Continued Below Both sides of the abortion battle are focused on the future of Roe v. Northern Ireland is now leading the way on women's rights – the rest of the UK must follow suit.

At midnight last night, legislation came into effect in Northern Ireland lifting a ban on abortion that had been in place for 158 years. 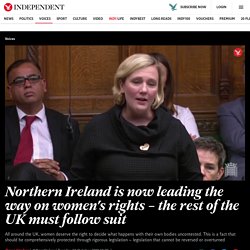 As a result, women and girls in the country can now have an abortion without fear of being prosecuted. This also means that medical professionals performing the procedure are no longer at risk of being charged with a criminal offence. Police will no longer be able to investigate cases relating to termination of a pregnancy, and all current cases will be dropped. Why so many young women don't call themselves feminist. Women's rights under threat after Brexit, warns EHCR report. Women in the UK risk losing hard-won equality and human rights protections, including employment rights and funding for women’s services, when the UK leaves the EU, according to the Equality and Human Rights Commission (EHRC). 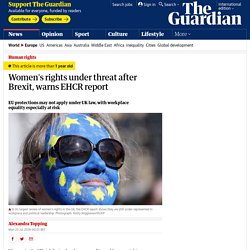 In its largest review of women’s rights in the UK, the EHRC warns that although the government has promised protections in the Equality Act will continue to apply once the UK leaves the bloc, “this political commitment is not included” in the European Union (withdrawal) bill. According to the report, Brexit could mean future equality and human rights protections under the EU are not binding in UK law and that existing ones may be removed.

“Employment rights and funding for women’s services are areas of particular concern,” it states. The report exposes “the sometimes serious and extreme consequences of women’s inequality”, but states that a dearth of quality data makes tackling discrimination more difficult. More than 200 members of Congress urge US supreme court to reconsider Roe v Wade. More than two hundred members of Congress have urged the US supreme court to reconsider the landmark 1973 Roe v Wade ruling which legalized abortion nationwide. 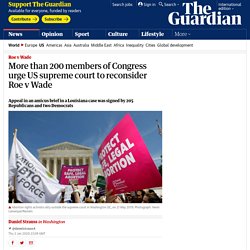 The year in patriarchy 2019: from Epstein conspiracy theories to Japanese high heels. A young Sudanese woman, dressed in white, standing high above a crowd and demanding change. 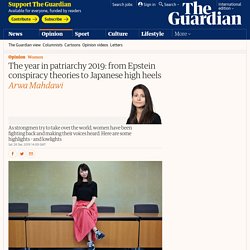 A fearless Lebanese woman drop-kicking an armed bodyguard in the groin amid anti-corruption protests in Beirut. A teenage girl from Sweden staring down Donald Trump at the UN climate summit. If there is an image that sums up 2019 it may well be a young woman protesting. As strongmen try to take over the world, women have been fighting back and making their voices heard. While it has been a year marked by political upheaval, there’s also been a lot of light relief. We also had a lot of firsts. 'Everybody is talking about it': women's rights to take centre stage in 2020.

World leaders, civil society and the private sector are preparing to make 2020 the biggest year yet for the advancement of women’s rights. 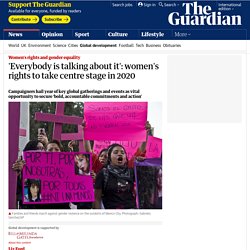 Over the course of the year, thousands of people are expected to attend high-level UN events and forums in Mexico City and Paris to mark the 25th anniversary of the Beijing platform for action, a landmark agreement to end gender inequality. More than 160 countries have already submitted reports outlining the progress made and the obstacles faced in achieving the Beijing agreement. In January, the UN secretary general is expected to publish an assessment of global efforts, and member states are already negotiating ways to accelerate action. Global gatherings for gender equality, convened by UN Women – which has launched its own Generation Equality campaign – and co-hosted by the governments of Mexico and France, will be held in May and July.

How British Feminism Became Anti-Trans. In America, however, TERFism today is a scattered community in its death throes, mourning the loss of its last spaces, like the Michigan Womyn’s Music Festival, which ended in 2015. 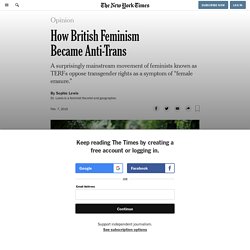 And so the strangely virulent form that TERFism takes in Britain today, and its influence within the British establishment, requires its own separate, and multipronged, explanation. Ms. Parker and Ms. Why it’s time to retire the Handmaids. How Lisa Bloom, feminist attorney, became just another complicit Aunt Lydia. The U.S. women’s soccer team has more than earned equal pay.