Transporter. Internet of Things Toilet Uploads Events to the Cloud (Raspberry PI) DIY bluetooth receiver for any amplifiers under 3$ Today I found some old Bluetooth mono headset its kinda useless for me since you know it looks weird when you are wearing it so I tried repurposing it now lets see what can I do with something with bluetooth and audio capabilities.... 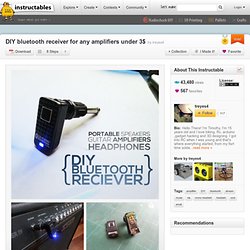 Well the first thing that came up in my mind was another BT boombox or amp, we all know thats common here so I tried something new and much simpler!.... STREAM your music on any Amplifier via Bluetooth. its that simple and I asure you It wont even cost 4$+ well unless you buy a mono headset. which is something like 10-40$,but any ways let me show you the things you will need A 3.5mm JACK or a 6.5mm guitar amp jack 1-2$ Some thin wires like 28 AWG wires And the important part the BT mono headset.

Program your Arduino with an Android device! Cheap, nice and weird A4 graph plotter ($25 + some scrap) Updated on Jun 2, 2014 My contest entry was accepted - now you can vote for this project if you like it! 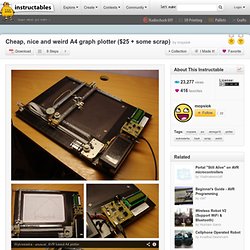 Thanks! Hi there! At the begining I have to warn you... The solution presented below is quite inefficient and weird. The concept. Hack a $30 WiFi Pan-Tilt Camera - Video, Audio, and Motor control with Python. In this Instructable, you'll learn how to intercept the video, microphone, and controls of the $30 Kaicong SIP1602 wireless pan-tilt camera on Windows, Linux, or OSX! 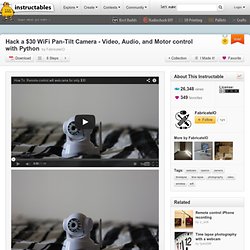 Everything is rolled neatly into python scripts; you can use the output data for things like voice transcription, computer vision, and automated directional control. If you're feeling truly adventurous, keep on reading and you'll learn my methods to discover and reverse engineer wireless cameras! Installation time: ~30 minutes You will Need: A Kaicong SIP1602 WiFi Pan-Tilt Camera NOTE: Apparently the popularity of this Instructable wiped out Amazon's stock. 9 Python Filter Function and List Comprehension Examples (Python List with For Loop and If Condition)

Selecting and operating on a subset of items from a list or group is a very common idiom in programming. 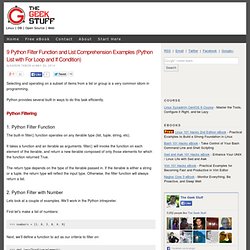 Python provides several built-in ways to do this task efficiently. Python Filtering 1. Python Filter Function The built-in filter() function operates on any iterable type (list, tuple, string, etc). It takes a function and an iterable as arguments. filter() will invoke the function on each element of the iterable, and return a new iterable composed of only those elements for which the function returned True. The return type depends on the type of the iterable passed in. 2.

Lets look at a couple of examples. View_article. To use with Raspberry Pi or to program simulation software, here's bringing 51 super helpful and free ebooks on Python programming that can help you become a python pro. 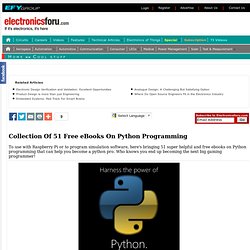 Who knows you end up becoming the next big gaming programmer! 1. Learning to Program Using Python Author: Cody Jackson, 2013 An introduction to computer programming, using the easy, yet powerful, Python programming language. 2. Learn WXPython Basic Step By Step. Software Testing Software testing is the process of evaluation a software item to detect differences between given input and expected output. 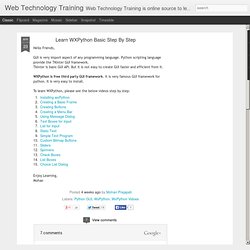 Also to assess the feature of A software item. Testing assesses the quality of the product. Capture Image Screenshots with Python. GrabzIt provides many options for taking image screenshots, some of which are shown below. 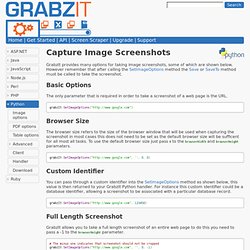 However remember that after calling the SetImageOptions method the Save or SaveTo method must be called to take the screenshot. Basic Options The only parameter that is required in order to take a screenshot of a web page is the URL. grabzIt.SetImageOptions(" Browser Size. Sharing your Python code/module via PyPI (Python Package Index) – John Troony. You have spent some of your good time coding and debugging some nice Python Modules all night and the next morning you share the glory with your fellow friends, they all give you a pat on the back! 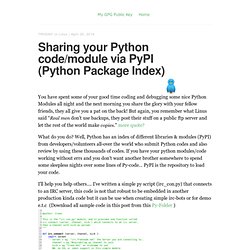 But again, you remember what Linus said “Real men don’t use backups, they post their stuff on a public ftp server and let the rest of the world make copies.” more quote? Useful Libraries for everyday work in Popular Languages. There are many highly capable and well written free libraries for programmers to utilize and drag their everyday tasks to completion. 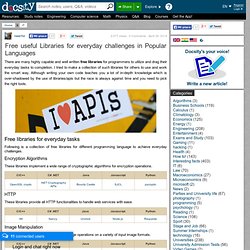 I tried to make a collection of such libraries for others to use and work the smart way. 10 Articles Every Programmer Must Read. From native code to geometry - How to make a Lisp out of Python by akalenuk. It is believed that Python syntax is restricted by design to be readable at the expense of its expressiveness. 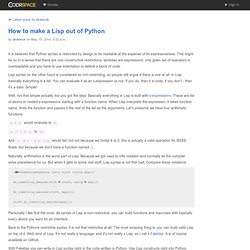 This might be so in a sense that there are non-constructive restrictions: lambdas are expressions, only given set of operators is overloadable and you have to use indentation to delimit a block of code. Lisp syntax on the other hand is considered so non-restricting, so people still argue if there is one at all. In Lisp basically everything is a list. You can evaluate it as an s-expression or not. If you do, then it is code, if you don't - then it's a data. Well, not that simple actually, but you got the idea. Python's Namespaces and Scope. This is a short tutorial about Python's namespaces and the scope resolution for variable names using the LEGB-rule. The following sections will provide short example code blocks that should illustrate the problem followed by short explanations. You can simply read this tutorial from start to end, but I'd like to encourage you to execute the code snippets - you can either copy & paste them, or for your convenience, simply download it as IPython notebook.

10 places where anyone can learn to code. Teens, tweens and kids are often referred to as “digital natives.” Having grown up with the Internet, smartphones and tablets, they’re often extraordinarily adept at interacting with digital technology. But Mitch Resnick, who spoke at TEDxBeaconStreet, is skeptical of this descriptor. Sure, young people can text and chat and play games, he says, “but that doesn’t really make you fluent.”

Mitch Resnick: Let's teach kids to code Fluency, Resnick proposes in this TED Talk, comes not through interacting with new technologies, but through creating them. The former is like reading, while the latter is like writing. Code Maven and Game Maven Teach Kids to Program Their Own Games. Arduino+Stepper Motor Camera Slider. This is a trial and error / design and development process which I followed in developing a camera slider for creating time-lapse video clips on my DSLR camera.

The idea came from using standard Aluminium extrusions I have available at hardware stores, and create a slider chassis / dolly which is able to slide along this extrusion. The Aluminium extrusion is what builders use for creating a smooth screed on a floor, or plastering a wall. It is a perfect hollow rectangular extrude, of approx 70mm by 20mm, and is available in various lengths between 1m, and 4m. The wheels which I found which are suitable are standard Hillaldam shower rollers, which ended up working perfectly.

The process of development saw the following needing to be designed, tested, and then prototyped: 1. 2. 3. For the planning and design work, I used Corel Draw. How Steve Wozniak Wrote BASIC for the Original Apple From Scratch. Here's a list of 48 free online programming/CS courses (MOOCs) with feedback(i.e. exams/homeworks/assignments) that you can start this month (May 2014) : learnprogramming. Cambridge Junction. Cambridge Junction and key partners Cambridge University Faculty of Education and The Raspberry Pi Foundation are pleased to announce that they are to be the recipients of a grant of £124,663 from the Digital R&D Fund for the Arts towards a pioneering project developing the making of music using the Raspberry Pi computer.

Participants at a recent Sonic Pi workshop at Cambridge Junction The Digital R&D Fund for the Arts has announced that the Sonic Pi: Live & Coding project is one of only 8 new digital research projects to be supported by the prestigious national award. The ground-breaking project focuses on thelow cost (£25), highly accessible, credit-card sized Raspberry Pi computer which was created to encourage children and young people all over the world to learn programming.

The Sonic Pi: Live & Codingproject will explore the computers use in education, particularly the creative potential of live coding to provide new pathways for young people into digital music. Minecraft Pi recipe cards to download and keep. We think Craig Richardson’s brilliant. His Python Programming for Raspberry Pi book (available as a free download) remains one of the very best tools for stealthily teaching rigorous and useful computing concepts and programming tricks to kids that we’ve seen. Kids love Craig’s resources (we’ve found it hard to make them stop working and pack up to go home when we’ve run Craig’s bag of tricks in workshops); and whether you’re a teacher, a parent or an interested learner of any age, you’ll find something in there to get your teeth into. Craig’s Minecraft resources will be available to buy in print later in the year (we know a lot of you prefer to have textbooks and other reference material available as a dead-tree book).

Speaking of dead trees, Craig’s preferred method of teaching times tables is to get kids fighting Minecraft trees. It goes down about 1000% better than number squares. Craig says: Minecraft: Pi Edition has huge potential for engaging people with programming. PiPhone – A Raspberry Pi based Smartphone. Hacking 2 DVD RW writers: here’s engravR (RPi Laser Engraver) How to 3D scan with Skanect. PyCon US 2014. Programming. Spy Camera Made with an Arduino Catches a Cubicle Thief. A Raspberry Pi Camera. Adafruit launched it's PiTFT not long ago and I bought one immediately from Pimoroni. Soon after that Adafruit published a tutorial entitled DIY WiFi Raspberry Pi Touchscreen Camera. Watch Live TV Online. How Google Search Works and A Whole Bunch of Search Tips. The Hour of Code 2013.

Build Your Own Raspberry Pi-Powered Tablet.