ASP.NET MVC 5 - A .NET Developer Primer for Single-Page Applications. A majority of Microsoft .NET Framework developers have spent most of their professional lives on the server side, coding with C# or Visual Basic .NET when building Web applications. 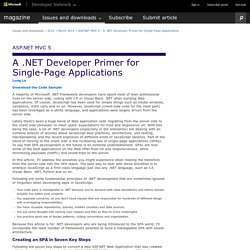 Of course, JavaScript has been used for simple things such as modal windows, validation, AJAX calls and so on. However, JavaScript (client-side code for the most part) has been leveraged as a utility language, and applications were largely driven from the server side. Lately there’s been a huge trend of Web application code migrating from the server side to the client side (browser) to meet users’ expectations for fluid and responsive UX.

With this being the case, a lot of .NET developers (especially in the enterprise) are dealing with an extreme amount of anxiety about JavaScript best practices, architecture, unit testing, maintainability and the recent explosion of different kinds of JavaScript libraries. Creating an SPA in Seven Key Steps Figure 1 ASP.NET MVC Project Structure Figure 14 The Utility Module. Inversion of Control Containers and the Dependency Injection pattern. In the Java community there's been a rush of lightweight containers that help to assemble components from different projects into a cohesive application. 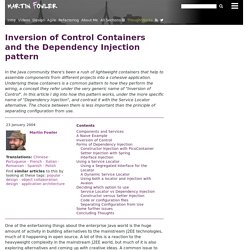 Underlying these containers is a common pattern to how they perform the wiring, a concept they refer under the very generic name of "Inversion of Control". In this article I dig into how this pattern works, under the more specific name of "Dependency Injection", and contrast it with the Service Locator alternative. The choice between them is less important than the principle of separating configuration from use. 10 common traps and mistakes in C# 1) Using the wrong type of collection. 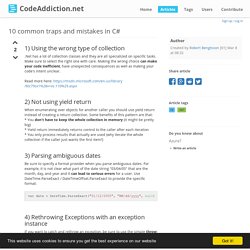 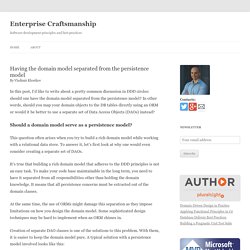 In other words, should you map your domain objects to the DB tables directly using an ORM or would it be better to use a separate set of Data Access Objects (DAOs) instead? Should a domain model serve as a persistence model? This question often arises when you try to build a rich domain model while working with a relational data store. To answer it, let’s first look at why one would even consider creating a separate set of DAOs. It’s true that building a rich domain model that adheres to the DDD principles is not an easy task. S.O.L.I.D: The First 5 Principles of Object Oriented Design. S.O.L.I.D is an acronym for the first five object-oriented design(OOD) principles by Robert C. Martin, popularly known as Uncle Bob. These principles, when combined together, make it easy for a programmer to develop software that are easy to maintain and extend. Microservices. 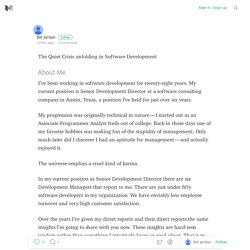 My current position is Senior Development Director at a software consulting company in Austin, Texas, a position I’ve held for just over six years. Is your stuff backed up? Recovering from a hardware failure. Mobile Website Speed Testing Tool - Google.

4K Research. Operating Systems. Programming. Testing. ComputerPrograms. Learning Servers. Know Your Network, Lesson 2: Understanding Your Router’s Admin Page. They are unique when they leave the factory, the first 6 characters specify the vendor, the last 6 specify the device, but if you go under the properties of the network adapter there's an option to specify the MAC. 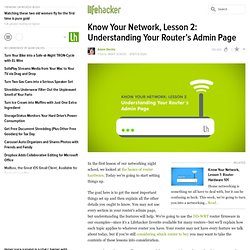 It's normally labeled something like Network Address, Physical Address, Locally Administered Address, etc. What bitrate should I use when encoding my video? How do I optimize my video for the web? How to Open God Mode on Windows 8, 7 & Vista. Devices and Printers - Change Device Icons with Custom Icons. _dk_antec_lanboy_air_7.JPG (520×638)

G.Skill F4-2666C16Q2-64GRB DDR4-2666 Memory Kit Review. Remember when we used to expect per-DIMM capacity to double with every new generation of RAM? 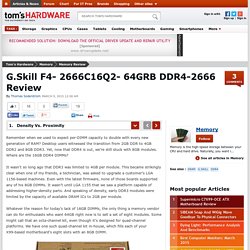 Desktop users witnessed the transition from 2GB DDR to 4GB DDR2 and 8GB DDR3. Yet, now that DDR4 is out, we’re still stuck with 8GB modules. Where are the 16GB DDR4 DIMMs? It wasn’t so long ago that DDR3 was limited to 4GB per module. This became strikingly clear when one of my friends, a technician, was asked to upgrade a customer’s LGA 1156-based machines. Whatever the reason for today's lack of 16GB DIMMs, the only thing a memory vendor can do for enthusiasts who want 64GB right now is to sell a set of eight modules.

We’ve seen the memory development process follow a specific speed-capacity-speed path over the years, where IC manufacturers typically need several months to increase the performance of higher-density parts to the standards of lower-density predecessors. Johnny Lucky Solid State Drive Database. ASRock Fatal1ty X99 Professional Motherboard Review. March 16th, 2015 at 8:09 am - AuthorLuke Hill We will be outlining the ASRock Fatal1ty X99 Professional motherboard’s performance with the Core i7 5960X CPU at its stock frequency (3.5GHz due to forced turbo). 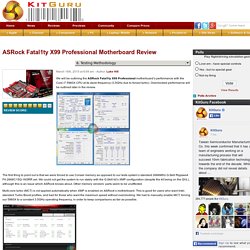 Overclocked performance will be outlined later in the review. Anypixel.js.