Winemakers of Rutherglen. Rutherglen Muscat, north-east Victoria. I was sipping a glass of this uniquely Australian strong, sweet wine the other night while watching What Not To Wear with my 12-year-old daughter. 'That smells just like fruitcake', she said. 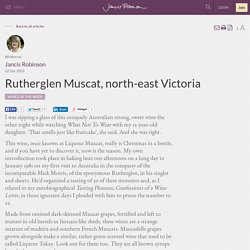 And she was right. This wine, once known as Liqueur Muscat, really is Christmas in a bottle, and if you have yet to discover it, now is the season. My own introduction took place in baking heat one afternoon on a long day in January 1981 on my first visit to Australia in the company of the incomparable Mick Morris, of the eponymous Rutherglen, in his singlet and shorts. He'd organised a tasting of 30 of these monsters and, as I related in my autobiographical Tasting Pleasure; Confessions of a Wine Lover, in those ignorant days I pleaded with him to prune the number to 23. Made from raisined dark-skinned Muscat grapes, fortified and left to mature in old barrels in furnace-like sheds, these wines are a strange mixture of madeira and southern French Muscats.

Rutherglen ambush. This is a longer version of an article also published in the Financial Times. 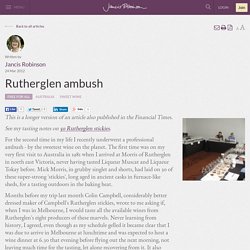 See my tasting notes on 50 Rutherglen stickies. For the second time in my life I recently underwent a professional ambush - by the sweetest wine on the planet. The first time was on my very first visit to Australia in 1981 when I arrived at Morris of Rutherglen in north east Victoria, never having tasted Liqueur Muscat and Liqueur Tokay before. Mick Morris, in grubby singlet and shorts, had laid on 30 of these super-strong 'stickies', long aged in ancient casks in furnace-like sheds, for a tasting outdoors in the baking heat. Months before my trip last month Colin Campbell, considerably better dressed maker of Campbell's Rutherglen stickies, wrote to me asking if, when I was in Melbourne, I would taste all the available wines from Rutherglen's eight producers of these marvels.

Merely surviving this assault by sugar and alcohol was going to be challenging enough. Bullers Big, burly wines. Rutherglen, Victoria. This article is about the town in Victoria, Australia. 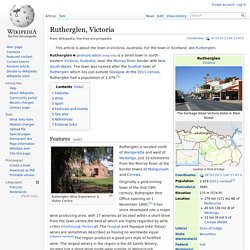 For the town in Scotland, see Rutherglen. Rutherglen pronunciation is a small town in north-eastern Victoria, Australia, near the Murray River border with New South Wales. The town was named after the Scottish town of Rutherglen which lies just outside Glasgow. Rutherglen Victoria. Few wines can elicit a response on first tasting quite like Rutherlgen Muscat. 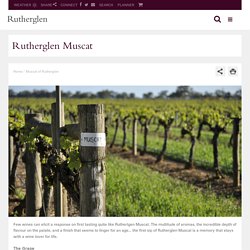 The multitude of aromas, the incredible depth of flavour on the palate, and a finish that seems to linger for an age... the first sip of Rutherglen Muscat is a memory that stays with a wine lover for life. The Grape There are more than 200 varieties in the muscat family, but only one is used to make Rutherglen Muscat - the high quality Muscat a Petits Grains Rouge (muscat with little red berries). The local winemakers refer to it simply as Rutherglen Brown Muscat. The Making of Muscat To make the world's richest wine it stands to reason that you need ripe fruit. Oil and topography play a role also. In the winery the fruit is sensitively handled and fortified with a natural grape spirit.

Rutherglen Muscat is rarely bottled as a single vintage wine. 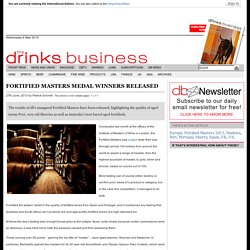 Conducted last month at the offices of the Institute of Masters of Wine in London, the Fortified Masters saw judges taste their way through almost 100 entries from around the world to award a range of medals, from the highest accolade of master, to gold, silver and bronze, based on scores out of 100. Blind tasting can of course either destroy or confirm prior views of a product or category, but in the case this competition, it managed to do both.

It verified the tasters’ belief in the quality of fortified wines from Spain and Portugal, and it overturned any feeling that Australia and South Africa can’t produce rich and age-worthy fortified wines of a high standard too. Top Australian fizz, pinks and fortifieds. Fortified Masters 2014: The results. Judging took place at Kensington Place restaurant in London There are few tastings more enjoyable in our calendar of competitions than The Drinks Business Fortified Masters. 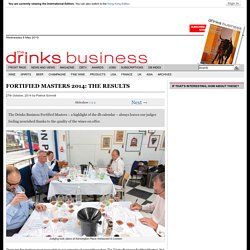 Not only does it comprise a broad array of styles, and some little-known and historic wines from Mediterranean nations, but it contains some of the most delicious products to stem from the grape. Much of their interest can of course be attributed to the winemaking and maturation methods, which like their sources, are highly varied. But if one were to draw a general conclusion from this tasting, which is now in its second year, it is that the older the fortified wine, the better it tends to score. Be it New World Muscats, tawny Ports, or Sherries, those wines which have spent many years concentrating in casks yield a rich, unctuous and complex liquid, which can’t really be bettered.