Waves and Their Applications for Energy Transfer

Scientists have found a way to photograph people in 3D through walls using Wi-Fi. Wi-Fi can pass through walls. 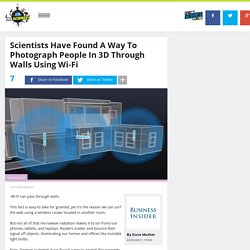 This fact is easy to take for granted, yet it's the reason we can surf the web using a wireless router located in another room. But not all of that microwave radiation makes it to (or from) our phones, tablets, and laptops. Routers scatter and bounce their signal off objects, illuminating our homes and offices like invisible light bulbs.

Now, German scientists have found a way to exploit this property to take holograms, or 3D photographs, of objects inside a room — from outside it. "It can basically scan a room with someone's Wi-Fi transmission," Philipp Holl, a 23-year-old undergraduate physics student at the Technical University of Munich, told Business Insider. Holl initially built the device as part of his bachelor thesis with the help of his academic supervisor, Friedemann Reinhard. Holl says the technology is only in its prototype stage and has limited resolution, but he is excited about its promise. Sound wave visualised. Smart Move! - Activity - www.teachengineering.org. Groovy Sounds: Sound &amp; Record Player Science Activity.

PB402Xweb. Students are trying to explain this phenomenon. #NGSSchat. CRAZY awesome initial Ss Models-why we c colors & how mixing colors produces new colors from Drew Neilson's Physics Class! #NGSS #NGSSChat. Free K - 12 Common Core Lesson Plans and Ideas. Free K - 12 Common Core Lesson Plans and Ideas. Middle School Physical Sciences Scroll Up Scroll Down Waves and Their Applications in Technologies for Information Transfer back Use mathematical representations to describe a simple model for waves that includes how the amplitude of a wave is related to the energy in a wave. 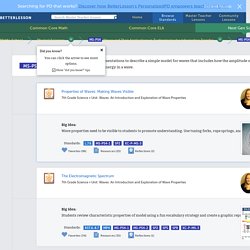 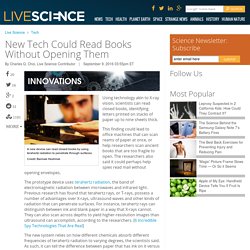 This finding could lead to office machines that can scan reams of paper at once, or help researchers scan ancient books that are too fragile to open. The researchers also said it could perhaps help spies read mail without opening envelopes. The prototype device uses terahertz radiation, the band of electromagnetic radiation between microwaves and infrared light. Previous research has found that terahertz rays, or T-rays, possess a number of advantages over X-rays, ultrasound waves and other kinds of radiation that can penetrate surfaces. For instance, terahertz rays can distinguish between ink and blank paper in a way that X-rays cannot. The new system relies on how different chemicals absorb different frequencies of terahertz radiation to varying degrees, the scientists said. Original article on Live Science. Sound Booth Construction. 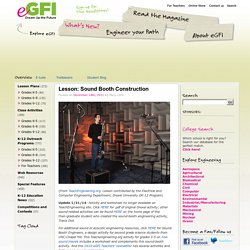 Lesson contributed by the Electrical and Computer Engineering Department, Drexel University GK-12 Program) Update 1/31/14: Activity and worksheet no longer available on TeachEngineering site. Lesson Plans On Sound And Acoustics For Grades 4 Through 6. Acoustics is the study of the properties of sound and how sound is transmitted through space. 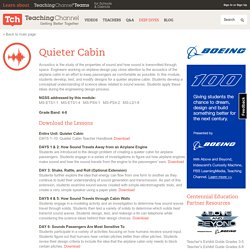 Modeling Earthquake Waves. An earthquake occurs when massive rock layers slide past each other. 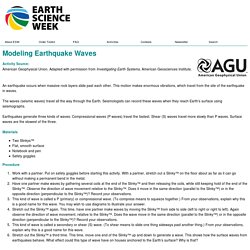 This motion makes enormous vibrations, which travel from the site of the earthquake in waves. The waves (seismic waves) travel all the way through the Earth. Seismograph. Seismic waves animation activity. How do P & S waves give evidence for a liquid outer core? Shadow Zones For background on this animation series, download Background from the Resources box.Animations are available for preview in embedded YouTube. 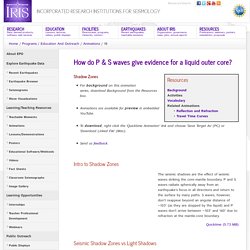 Why do seismic waves travel a curving path through the Earth? Refraction For background on this animation series, download Background from the Resources box.Animations are available for preview in embedded YouTube. 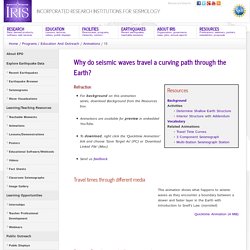 To download, right click the 'Quicktime Animation' link and choose 'Save Target As' (PC) or 'Download Linked File' (Mac).Send us feedback. Travel times through different media This animation shows what happens to seismic waves as they encounter a boundary between a slower and faster layer in the Earth with introduction to Snell’s Law. Es 0402 geo. Ss1508_18.pdf. Faultline: Earthquake History and Science. Bending Light - Index of Refraction, Light, Snell's Law. Sound Uncovered: An Interactive Book for the iPad. Explore the surprising side of sound with Sound Uncovered, an award-winning interactive collection from the Exploratorium featuring auditory illusions, acoustic phenomena, and other things that go bump, beep, boom, and vroom. 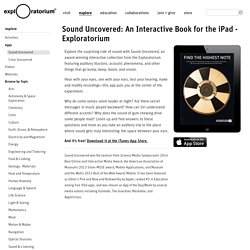 Hear with your eyes, see with your ears, test your hearing, make and modify recordings—this app puts you at the center of the experiment. Tacoma Narrows Bridge Collapse "Gallopin' Gertie". Amazing Water & Sound Experiment #2.