Men Are Dressing for Zoom. If, for Ryan Dichter, Week 1 of his coronavirus isolation was a time for dandling his infant daughter, Teddy, slouching around in sweatpants and waiting for the happy-hour start gun, it became clear to him, as the terms of our collective confinement wore on, that the time had come to shower up and tug on some hard pants. 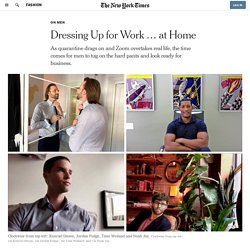 “At first every night was Friday night,” said Mr. There’s an Instagram Account Dedicated to Dr. Deborah Birx’s Scarves. Before her colleagues decreed silk scarves an acceptable alternative to face masks for the general public, Dr. 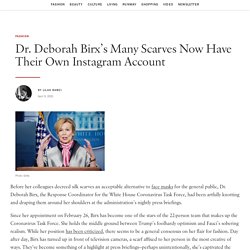 Deborah Birx, the Response Coordinator for the White House Coronavirus Task Force, had been artfully knotting and draping them around her shoulders at the administration’s nightly press briefings. Since her appointment on February 26, Birx has become one of the stars of the 22-person team that makes up the Coronavirus Task Force. She holds the middle ground between Trump’s foolhardy optimism and Fauci’s sobering realism. While her position has been criticized, there seems to be a general consensus on her flair for fashion. Day after day, Birx has turned up in front of television cameras, a scarf affixed to her person in the most creative of ways. The brainchild of Victoria Strout, a fashion-obsessed music marketing exec from Fort Worth, Texas, the account known as @deborahbirxscarves has a simple format. Marc Jacobs Does WFH Dressing Like Nobody Else.

Marc Jacobs is a master of the work-from-home 'fit. 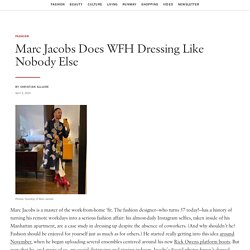 The fashion designer—who turns 57 today! —has a history of turning his remote workdays into a serious fashion affair: his almost-daily Instagram selfies, taken inside of his Manhattan apartment, are a case study in dressing up despite the absence of coworkers. (And why shouldn’t he? Fashion should be enjoyed for yourself just as much as for others.) He started really getting into this idea around November, when he began uploading several ensembles centered around his new Rick Owens platform boots. See Kristen Stewart’s Style Evolution from Twilight to 2020. It’s easy to spot a Kristen Stewart-worthy outfit. 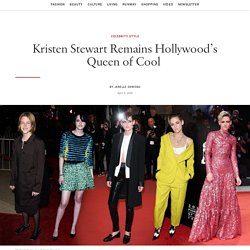 The actor, who turns 30 today, has clearly defined her nonchalant style and has a penchant for Chanel gowns to Converse sneakers. Never one to worry about public opinion, she’s spent the last few years experimenting with vivid hair colors, unexpected designers, and a borrowed from the boys sensibility that allows her to mix the best menswear into her repertoire of tailored suiting and ripped denim. On the red carpet, her choices feel refreshing and untroubled by the latest trends thanks to the confidence Stewart brings to every appearance.

The Nominees For The 2020 CAFA Awards Have Been Revealed. As well as this year's honourees. 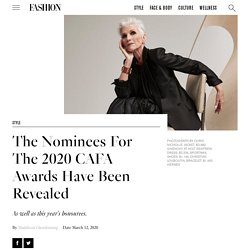 By Maddison Glendinning Date March 12, 2020. 5 Hillary Clinton–Approved Colours to Wear on International Women's Day. No matter what your political views may be, there's no denying the fact that Hillary Clinton's candidacy for president of the United States will be remembered as one of the most important moments in women's history. 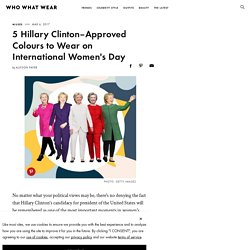 How Danish Brand Carcel Is Empowering Incarcerated Women. Carcel is also transparent about the limitations of its impact. 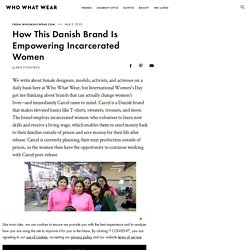 "Working with incarcerated women does not address the root causes of why they are in prison in the first place," Carcel explains on its website, "but it creates opportunities for them and their families while they are incarcerated and when released. " Sustainability, including avoiding overproduction, is also a critical part of Carcel. The brand uses 100% natural materials—never synthetic—and only sources locally from its production sites. Fashion news and trends from the international industry.

This article shows us what the fashion industry needs and how you can really enter the industry. From the beginning of the student life to the later fashion show, every step is indispensable. And what impact this industry will have in the social and economic fields. – bowang

A silhouette is born: Loewe changes shapes with new collection. A new silhouette was born on the catwalk at Paris fashion week on Friday morning. 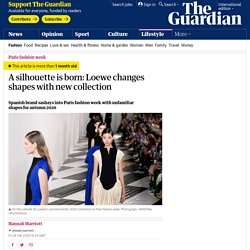 Marc Jacobs mixes mid-century poise with neon pandemonium. Marc Jacobs was scheduled to close New York fashion week with a catwalk show, but he closed it with a party instead. 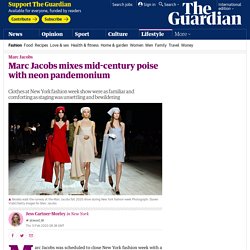 The theme of this show is quite novel and represents great significance. Good use of fashion while promoting the importance of protecting wild animals. Equivalent animal clothing symbolizes equality between man and animal. While promoting fashion, we must also pay attention to the balance between ecology and economy, and common development will achieve better development. – bowang

Hedi Slimane delivers masterclass in modern nostalgia for Celine. At his Celine catwalk show on Friday night, the designer Hedi Slimane distilled what looks to be the most compelling trend of this season of fashion shows. 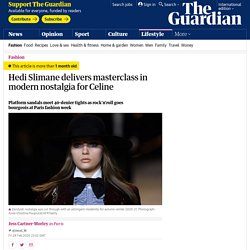 Oscars 2020: Best and worst-dressed celebrities on the red carpet. One of Hollywood’s biggest nights for fashion — the Oscars — did not disappoint. The 92nd Annual Academy Awards kicked off on Sunday in Los Angeles, and stars hit the red carpet with some of the season’s trendiest looks. The Oscars tend to bring out bling, glam and bowties, but this year we saw the industry’s biggest stars taking risks with colour and silhouette. READ MORE: 2020 Oscars winners — The complete list of this year’s Academy Award victors 6:25 The best and worst looks on the Oscars red carpet The red carpet kicked off with a Kobe Bryant tribute by Spike Lee, who traded in trend for a Lakers-inspired purple-and-yellow suit affixed with Bryant’s number 24. Below are some of our favourite and least favourite looks. Story continues below advertisement Best Dressed Mindy Kaling. The Wuhan Virus: How to Stay Safe. As the new Wuhan coronavirus has spread not only all over mainland China, but also worldwide, panic is rising.

With the beginning of the epidemic, protective clothing such as masks and gloves began to be applied. Protective clothing is the focus of attention. Materials such as cotton and rubber are added to make clothes. – bowang

Inside China there is a growing sense of helplessness, as the government is compelled to take drastic measures to stop the virus, including introducing some travel restrictions in Beijing. I have received panicked queries from journalists and public health workers in China, asking, “How can we protect ourselves and our families?” The epidemic could have been controlled fairly easily three weeks ago had there been more openness, swift action, and no attempted cover-up. But now it’s too late, and this virus is spreading globally. Because there is no vaccine or treatment for nCoV2019—the Wuhan pneumonia—and infection has spread throughout China, the government is forced to turn to its 2003 SARS playbook. Kate Middleton's BAFTAs Red Carpet Dress Code Makes a Lot of Sense.

Kate Middleton is attending the BAFTAs with Prince William on February 2, 2020.The awards ceremony is encouraging a specific dress code this year.According to the London College of Fashion, it's being suggested that attendees wear sustainable clothing to the event. When Kate Middleton hits the red carpet for the BAFTAs next weekend, she might be following a special dress code. As reported by People, everyone attending the ceremony is being encouraged to wear sustainable clothing. Per the London College of Fashion style guide, "This awards season BAFTA are doing more than ever before to consider sustainability across its awards ceremonies, including inviting guests to 'dress sustainably.'"