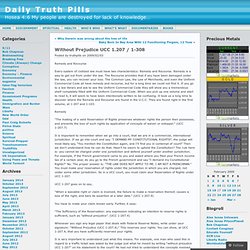 Remedy is a way to get out from under the law. The Recourse provides that if you have been damaged under the law, you can recover your loss. The Common Law, the Law of Merchants, and even the Uniform Commercial Code all have remedy and recourse, but for a long time we could not find it. If you go to a law library and ask to see the Uniform Commercial Code they will show you a tremendous shelf completely filled with the Uniform Commercial Code. Remedy “The making of a valid Reservation of Rights preserves whatever rights the person then possesses, and prevents the loss of such rights by application of concepts of waiver or estoppel.” It is important to remember when we go into a court, that we are in a commercial, international jurisdiction.

UCC 1-207 goes on to say… You have to make your claim known early. It is very important to understand just what this means. Recourse Like this: Sophia Stewart wins the Matrix copyright infringement case. New York, Nov 11 (THAINDIAN NEWS) Sophia Stewart an African American who claimed to be the author of The Matrix will finally receive her just due from the copyright infringement of her original work, as the copyright case is finally settled in court. 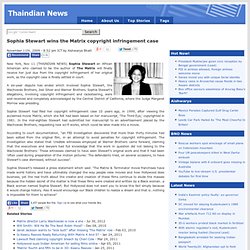 A six-year dispute has ended which involved Sophia Stewart, the Wachowski Brothers, Joel Silver and Warner Brothers. Sophia Stewart’s allegations, involving copyright infringement and racketeering, were well received and completely acknowledged by the Central District of California, where the Judge Margaret Morrow was presiding. Sophie Stewart had filed her copyright infringement case 10 years ago, in 1999, after viewing the acclaimed movie Matrix, which she felt had been based on her manuscript, ‘The Third Eye,’ copyrighted in 1981.

In the mid-eighties Stewart had submitted her manuscript to an advertisement placed by the Wachowski Brothers, requesting new sci-fi works, which could be later made into a movie. The Rule Of Law -Constitutional Monarchy vs Republic. POLITICALLY INCORRECT AND PROUD OF IT. Hello everyone. 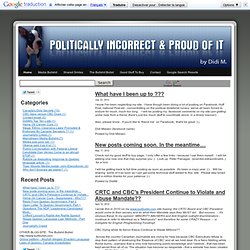 I know my posts have not been as fast and furious as they should be. Life's problems have gotten in the way and the fact I'm dancing at too many weddings at the same time and there just aren't enough hours in the day. I have been posting on Facebook on a daily basis and will try to get my Facebook page attached to this Blog to make things a bit easier for all of us. In the meantime I ran across an internet dialogue that I ended up being banned from (very typical when it comes to the illegal Quebec Language Laws and the Erasure of Rights & Freedoms in Quebec - endorsed of all things by our Federal Government) - that includes one of the finest and most heartfelt speeches ever made back in 1988 when the beginnings of the ethnic cleansing lunatic laws were being illegally enacted. Clifford Lincoln is the speech maker and I know you will agree with my sentiments once you read what he has to say. "Hi Rob, I have one more comment to add regarding: Steve_36. M. [translation; Mr.

JUDGE ARRESTED FOR TREASON by "WE THE PEOPLE" in his court. 30 Little Known Facts about America. Without Prejudice UCC 1.207 / 1-308 « Daily Truth Pills. Secret Oath. Your Lawyer's Secret Oath? 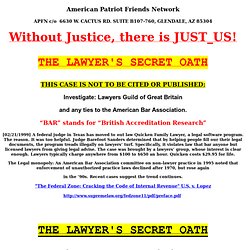 What was the effect and the significance of the Erie RR. v. Thompkins case decision of 1938? The significance is that since the Erie decision, no cases are allowed to be cited that are prior to 1939. There can be no mixing of the old law with the new law. The lawyers (who were members of the American Bar Association, were and are currently under and controlled by the Lawyer's Guild of Great Britain) created, formed and implemented the new bankruptcy law.

It has been reported (source unknown to the writer) that every lawyer in existence and every lawyer coming up has to take a SECRET OATH to support the bankruptcy. Hire a Lawyer? The problem here is, if you hire a lawyer, who is pledged not to reveal the true nature and cause. What would really kill these people off, would be to compel the International Bankers to send a lawyer to the courtroom and present himself as the attorney for the true creditor (the International Bankers). The Snare The Fraud U.S. U.S.A. How to look it up on the stock market... I don't consent. Freeman in court - judge bows to Sovereign - Canada. Key Part of Patriot Act Ruled Unconstitutional (washingtonpost.com) The Strawman Illusion, The Matrix Exposed, Part 1.