When you were born your government forged your name and created a Birth Certificate Bond. Posted by PRESS Core Corruption, World news Friday, May 4th, 2012 Prior to the 17th century most money was commodity money, typically gold or silver. 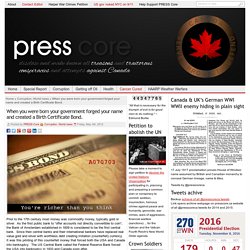 As the first public bank to “offer accounts not directly convertible to coin”, the Bank of Amsterdam established in 1609 is considered to be the first central bank. Since then central banks and their international bankers have replaced real value gold and silver with worthless debt creating imitation (counterfeit) currency. It was this printing of this counterfeit money that forced both the USA and Canada into bankruptcy. The US Central Bank called the Federal Reserve Bank forced the USA into bankruptcy in 1933 and Canada soon after. The United States Federal Government was dissolved by the Emergency Banking Act, March 9, 1933, 48 Stat. 1, Public Law 89-719; Declared by President Roosevelt, being bankrupt and insolvent. Public Law 94-564, page 8, Section H. You Can’t Own Yourself: Maritime Admirality – The Jones Act. Jones Act – The World of 1898: The Spanish-American War ‘A free people [claim] their rights as derived from the laws of nature, and not as the gift of their chief magistrate.’ – Thomas Jefferson, Rights of British America, 1774 Jones Act Maritime Law: The Jones Act Quote Two kinds of laws – are called Civil Law which is the law of the land and one is Maritime Admiralty which is called the law of water. 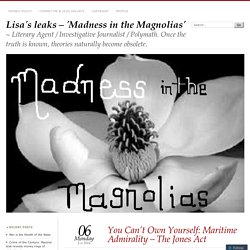 Notice where the mother signs on the birth certificate where it says ‘parent or other informant’ It has to be signed by the doctor cause that’s where the ship is tied to, so the doc signs your birth certificate. Black Eyed Children are Being Reported Worldwide. HERE IS STUFF YOU’RE NOT SUPPOSED TO KNOW , ABOUT YOUR FREEDOM AND SOVEREIGNTY. Watch Part II - Change your Legal Status - Practical Matters Online. The Best and Biggest Collection of Info On Sovereignty - David Icke's Official Forums. Sovereignty In general, all mankind will agree that government should be reposed in such persons, in whom those qualities are most likely to be found, the perfection of which is among the attributes of him who is emphatically styled the supreme being; the three grand requisites, I mean, of wisdom, of goodness, and of power: wisdom, to discern the real interest of the community: goodness, to endeavor always to pursue that real interest; and strength, or power, to carry this knowledge and intention into action. 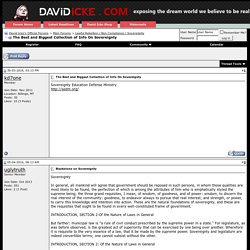 These are the natural foundations of sovereignty, and these are the requisites that ought to be found in every well-constituted frame of government. INTRODUCTION, SECTION 2:Of the Nature of Laws in General But farther: municipal law is "a rule of civil conduct prescribed by the supreme power in a state. " For legislature, as was before observed, is the greatest act of superiority that can be exercised by one being over another. Sovereignty Education and Defense Ministry (SEDM) – "Humble yourselves in the sight of the Lord and He will lift you up [above your government]." [James 4:30, Bible, NKJV] Sovereign Citizen and Redemption Scams - Quatloos! ‘Sovereign’ citizens in the UK: a study in nonsense. There is a group of people in the UK who believe that, by submitting a document to the government, they can detach themselves from society and thereby avoid all statutory responsibilities. 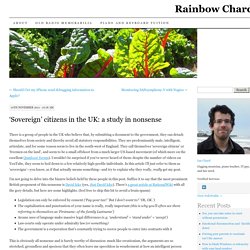 They are predominantly male, intelligent, articulate, and for some reason seem to live in the south-west of England. They call themselves ‘sovereign citizens’ or ‘freemen on the land’, and seem to be a small offshoot from a much larger US-based movement (of which more on the excellent Quatloos! Forum). I wouldn’t be surprised if you’ve never heard of them: despite the number of videos on YouTube, they seem to boil down to a few relatively high-profile individuals. In this article I’ll just refer to them as ‘sovereigns’—you know, as if that actually means something—and try to explain why they really, really get my goat. I’m not going to delve into the bizarre beliefs held by these people in this post. Legislation can only be enforced by consent (‘Pay your tax!’