Drafting And Negotiating Intellectual Property Defense And Indemnification Provisions - What You Don't Know Could Cost Your Clients Millions. Robert E. 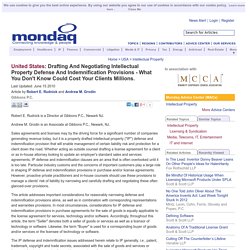 Rudnick is a Director at Gibbons P.C., Newark NJ. Andrew M. Grodin is an Associate at Gibbons P.C., Newark, NJ. Sales agreements and licenses may by the driving force for a siginificant number of companies generating revenue today, but it is a properly drafted intellectual property ("IP") defense and indemnification provision that will enable management of certain liability risk and protection for a client down the road. Whether acting as outside counsel drafting a license agreement for a client or as in-house attorney looking to update an employer's standard sales and services agreements, IP defense and indemnification clauses are an area that is often overlooked until it is too late. This article addresses important considerations for reasonably narrowing defense and indemnification provisions alone, as well as in combination with corresponding representations and warranties provisions.

A. B. C. D. Nishith Desai Associates: India’s New Labour Law - Prevention of Sexual Harassment at the Workplace. India finally enacted its law on prevention of sexual harassment against female employees at the workplace. 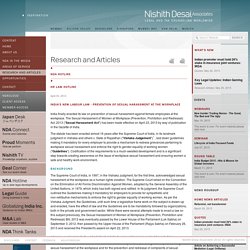 The Sexual Harassment of Women at Workplace (Prevention, Prohibition and Redressal) Act, 2013 ("Sexual Harassment Act") has been made effective on April 23, 2013 by way of publication in the Gazette of India. The statute has been enacted almost 16 years after the Supreme Court of India, in its landmark judgment in Vishaka and others v. State of Rajasthan ("Vishaka Judgement")1 , laid down guidelines making it mandatory for every employer to provide a mechanism to redress grievances pertaining to workplace sexual harassment and enforce the right to gender equality of working women ("Guidelines"). 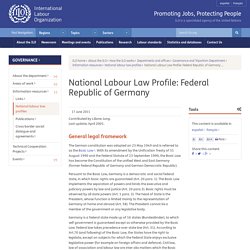 Last update, April 2001. General legal framework The German constitution was adopted on 23 May 1949 and is referred to as the Basic Law . With its amendment by the Unification Treaty of 31 August 1990 and the Federal Statute of 23 September 1990, the Basic Law has become the Constitution of the unified West and East Germany (former Federal Republic of Germany and German Democratic Republic). Persuant to the Basic Law, Germany is a democratic and social federal state, in which basic rights are guaranteed (Art. 20 para. 1).

Germany is a federal state made up of 16 states (Bundesländer), to which self government is guaranteed except as otherwise provided by the Basic Law.

If the EU wins its case against Google, it could change the search engine forever. The European Union's competition commissioner filed a "statement of objections" on Wednesday that brings Google a step closer to facing legal sanctions under European law. 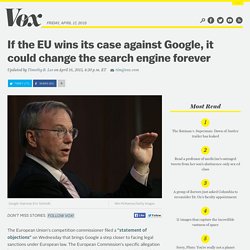 The European Commission's specific allegation is a relatively narrow one — that the search giant has broken the law by giving Google Shopping a more favorable position in search results than other comparison shopping services — but the underlying policy issue is much broader. Following the logic of the EU complaint would require a massive transformation of Google's search product. The key point is that Google doesn't just give prime real estate to Google Shopping results. It unapologetically does it for products like Google Images, Google Maps, and Google News — all of which regularly show up in special boxes near the top of Google search results. Consequently, if you take the logic of the EC's complaint seriously, then EU regulators aren't going nearly far enough. Europe is focused on shopping, at least for now. Delhi Court opinion on online gaming: 15 new facts emerge through landmark opinion, download copy of the verdict.

Exclusive The opinion of the Delhi district court on online gaming created a huge uproar with major media houses in India and abroad widely reporting the decision. 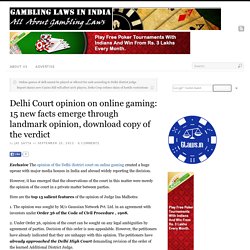 However, it has emerged that the observations of the court in this matter were merely the opinion of the court in a private matter between parties. Here are the top 15 salient features of the opinion of Judge Ina Malhotra: 1. The opinion was sought by M/s Gaussian Network Pvt. Gambling Laws in India. Internal Google Memo Responds To EU Antitrust Objections. Following reports about the European Union preparing to file formal charges against Google in its ongoing antitrust investigation, Google General Counsel Kent Walker has issued an internal memo to all employees. 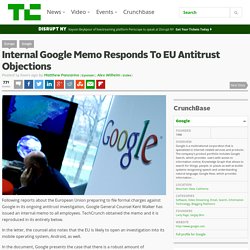 TechCrunch obtained the memo and it is reproduced in its entirety below. In the letter, the counsel also notes that the EU is likely to open an investigation into its mobile operating system, Android, as well. In the document, Google presents the case that there is a robust amount of competition in the areas that the commission is concerned with. It includes a variety of charts and graphs to support its rebuttals. “An [Statement of Objections] is not a final finding. “We have a very strong case, with especially good arguments when it comes to better services for users and increased competition,” Walker continues. Section 66 A of IT Act unconstitutional, Supreme Court rules.

The Supreme Court on Tuesday struck down Section 66 A of the Information and Technology Act, which allows police to arrest people for posting “offensive content” on the internet. 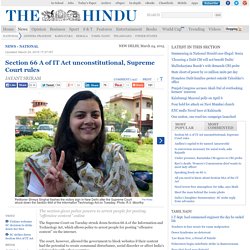 The court, however, allowed the government to block websites if their content had the potential to create communal disturbance, social disorder or affect India's relationship with other countries.