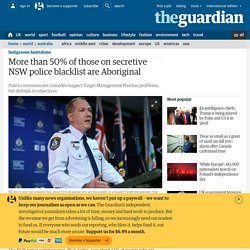 The NSW police commissioner, Mick Fuller, says about 55% of people who are currently the subject of a Suspect Target Management Plan are Indigenous, prompting accusations that police are using a “racially biased program” to combat crime. The Suspect Target Management Plan – or STMP – is a “predictive style of policing” that uses “disruption and prevention” to identify people who police believe are a high risk of committing crimes. In October, researchers from the University of New South Wales and the Public Interest Advocacy Centre released a report which showed the STMP was overwhelmingly aimed at young people and Indigenous Australians, and resulted in “oppressive policing”. It prompted Michael Adams, the chief commissioner of the NSW police watchdog, to voice concerns about the use of the STMP, saying the tool was potentially “problematic”. Lawyer behind ‘puritan patrols’ A leading criminal lawyer backs police's decision to reportedly cease mobile drug testing. 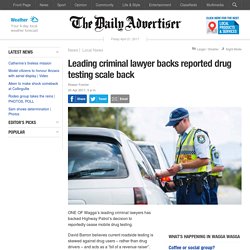 ONE OF Wagga’s leading criminal lawyers has backed Highway Patrol’s decision to reportedly cease mobile drug testing. David Barron believes current roadside testing is skewed against drug users – rather than drug drivers – and acts as a “bit of a revenue raiser”. “In relation to detecting whether a drug is simply present or not, it tends to be less about road safety and more about money,” he said.

“Oral swab tests aren’t aimed at people who are under the influence while driving. “I know when a person has a past offence, police are notified instantly by number plate recognition so you have to imagine they would be targeted.” It comes after Wagga’s leading Highway Patrol cop Wayne McLachlan told The Daily Advertiser his unit were “not presently conducting mobile tests” and had conducted just 225 tests this year. The Film.

This page provides video streams of the Expendable Documentary, sourced from a variety of global networks and territories. 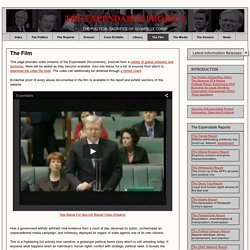 More will be added as they become available. Also see below, for a list of sources from which to download the video file itself. The video can additionally be obtained through a torrent client. Evidential proof of every abuse documented in the film is available in the report and exhibit sections of this website. See Below For Non-US Based Video Streams How a government wilfully withheld vital evidence from a court of law, deceived its public, orchestrated an unprecedented media campaign, and ruthlessly deployed its organs of state against one of its own citizens. This is a frightening but entirely true narrative; a grotesque political horror story which is still unfolding today. It presents, and demonstrates, the crushing, pre-meditated, and often brutal acts which a western government is prepared to inflict upon a helpless citizen, in pursuit of political expediency.

Cheap Cigarettes Available Over the Internet. Planning your release female combined june 2016. Pll 55 nov2011. Police in the Area. R v Wran - NSW Caselaw. As at 10 August 2014, Ms Wran and Michael Lee had been going out for approximately two weeks. 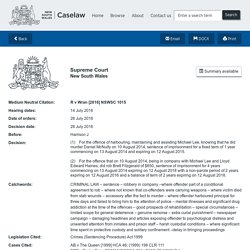 She was addicted to methylamphetamine. Mr Lee was a user of ice and heroin. Mr Lee had a friend named Lloyd Haines who was also a drug user. Ms Wran and Mr Lee had been staying with various friends in the days before the robbery. On 10 August 2014, Ms Wran asked her friend Andrew Hobbs if she and Mr Lee could stay at his place for a couple of days. “In all the circumstances, and when taking into account aggravating and mitigating factors, and the offender’s drug addiction and mental conditions (dealt with below), the Crown submits that the guideline of a head sentence towards the lower end of the four to five year range remains applicable to [Ms Wran’s] role in this offence.”

Daily Telegraph. To use this website, cookies must be enabled in your browser. To enable cookies, follow the instructions for your browser below. Facebook App: Open links in External Browser There is a specific issue with the Facebook in-app browser intermittently making requests to websites without cookies that had previously been set. This appears to be a defect in the browser which should be addressed soon.

The simplest approach to avoid this problem is to continue to use the Facebook app but not use the in-app browser. Fame and punishment – Honi Soit. Privilege pervades even our prison system, argues Natalie Czapski. 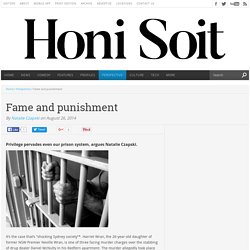 It’s the case that’s “shocking Sydney society”*. Harriet Wran, the 26-year-old daughter of former NSW Premier Neville Wran, is one of three facing murder charges over the stabbing of drug dealer Daniel McNulty in his Redfern apartment. The murder allegedly took place amidst a violent confrontation over $70 worth of ice. Harriet’s lawyers did not make a bail application, and she is now in remand at Silverwater Women’s Correctional Centre. The case of Harriet Wran: why we should see the person, not the drug addict. Is there anything better than a good downfall story? 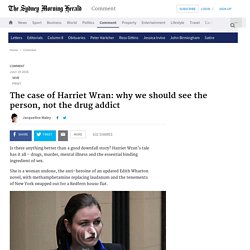 Harriet Wran's tale has it all – drugs, murder, mental illness and the essential binding ingredient of sex. She is a woman undone, the anti-heroine of an updated Edith Wharton novel, with methamphetamine replacing laudanum and the tenements of New York swapped out for a Redfern houso flat. Loaded: 0% Progress: 0% Harriet Wran jailed Everything's $2.80 at Daiso Sydney school embraces coding curriculum Stan Grant 'struggles to contain rage' Harriet Wran judge Ian Harrison under scrutiny over sentencing comments.