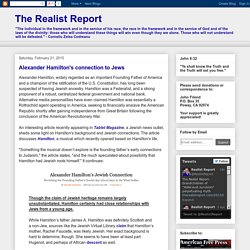 Constitution, has long been suspected of having Jewish ancestry. Hamilton was a Federalist, and a strong proponent of a robust, centralized federal government and national bank. Alternative media personalities have even claimed Hamilton was essentially a Rothschild agent operating in America, seeking to financially enslave the American Republic shortly after gaining independence from Great Britain following the conclusion of the American Revolutionary War. An interesting article recently appearing in Tablet Magazine, a Jewish news outlet, sheds some light on Hamilton's background and Jewish connections. The article discusses Hamilton, a musical which recently opened based on Hamilton's life. Though the claim of Jewish heritage remains largely unsubstantiated, Hamilton certainly had close relationships with Jews from a young age.While Hamilton’s father James A.

This day in Jewish history / Hamilton dies after duel with Burr - This Day in Jewish History - Israel News. The Great American Adventure 2A: The Indians Weren’t Savages And The Tax Fight Was About Gold – Shift Frequency. Judge Dale (Guest Writer) Shift Frequency | July 23 2012 King George III King George’s historic claim of ownership of the 13 American colonies (aka The Virginia Colony) was a prevarication. 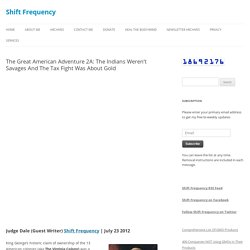 This false claim was made by a king, a pope and by Mayer [Bauer] Rothschild despite clear evidence that America was already inhabited. It was inhabited by the Red Race, the surviving descendants of Atlantis, a continent destroyed around 9600 BC during a world wide continental land shift. The Emperor of America at this time was an Indian named Moy Toy. The Ancient Rights of Discovery stated that only new, uninhabited or conquered lands could be claimed by a sovereign king or by his discoverer acting on his behalf. Factually, Land Grants could not have been obtained from the American Indian because the Red Race culture believed that “No man can own the wind or the sun any more than he can own the land, which the gods have created for their use and benefit.” Pilgrims Discover A New World. Knowledge Is Power: New Revelation About U.S. History Is the Key to Justice on All Fronts. By Foster Gamble & Kimberly Carter Gamble | ThriveMovement.com When the Shaka Movement won the victory of banning GMOs for a year in Maui, it was only a matter of weeks before Monsanto and Dow Chemical filed a law suit against the County to stop the ban. 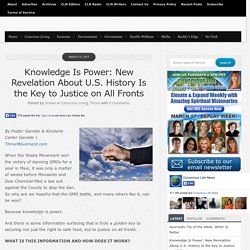 So why are we hopeful that the GMO battle, and many others like it, can be won? Because knowledge is power. And there is some information surfacing that is truly a golden key to securing not just the right to safe food, but to justice on all fronts. It is a mind-blowing revelation about our history that is both complex and unprecedentedly empowering. It seems that the laws Monsanto and the US government are using to squelch so many good efforts are actually laws of commerce, not laws of the Constitution.

America is not just in cahoots with corporations. This Commercial Law demands personal accountability. To wrap around this, let’s consider who would possibly benefit from the incorporation of America. Did You Know the IRS and the Fed are Private Corporations? Pao L. 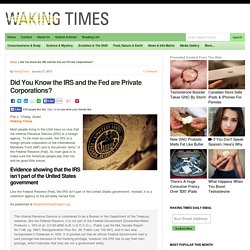 Chang, GuestWaking Times Most people living in the USA have no clue that the Internal Revenue Service (IRS) is a foreign agency. To be more accurate, the IRS is a foreign private corporation of the International Monetary Fund (IMF) and is the private “army” of the Federal Reserve (Fed). Its main goal is to make sure the American people pay their tax and be good little slaves. Chapter 8 - United States Government Bankruptcy. Chapter 8 of the TRUTH! 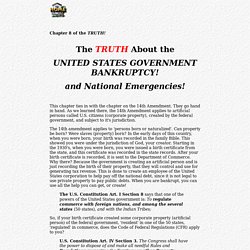 The TRUTH About the and National Emergencies! This chapter ties in with the chapter on the 14th Amendment. They go hand in hand. As we learned there, the 14th Amendment applies to artificial persons called U.S. citizens (corporate property), created by the federal government, and subject to it's jurisdiction. The 14th amendment applies to 'persons born or naturalized'. The U.S. So, if your birth certificate created some corporate property (artificial person) of the federal government, 'resident' in one of the 50 states, 'regulated' in commerce, does the Code of Federal Regulations (CFR) apply to you? U.S. Are there federal rules and regulations that you are subject to? What about the sovereign 50 states? A United States citizen is a subject (property) of the federal government.

An American Citizen is really not a citizen but is an individual sovereign. A United States citizen has the status of an 'artificial person'. Here's an interesting point for you to ponder!