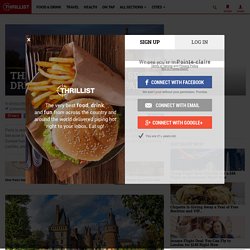 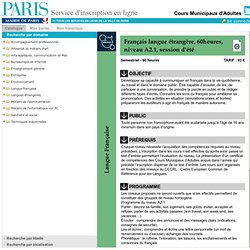 Top 10 budget restaurants and bistros in Paris. Eating on a budget in Paris often used to leave you feeling like the spectre at the feast, or rather sadly deprived of the city's gastronomic excellence. 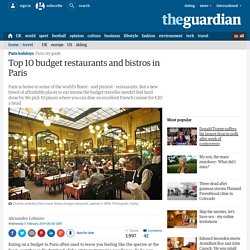 To be sure, there were always a few wallet-friendly French places where the food was better than average, plus some great ethnic options, but cheap eats rarely equated with seriously good food. Happily, a new generation of innovative restaurateurs are rebooting the French capital's offer for pennywise travellers, with food that's good enough even if you aren't counting your centimes. Oh, and in case you were wondering, Chartier, probably Paris's most famous budget restaurant, soldiers on as a place people go to get a meal for a tenner (euros, bien sur), just because you can.

Cines con memoria histórica. Tips for cycling in Paris - Freewheeling France. Local cyclist Mark Cramer has been cycling in Paris for more than a decade – he has these top tips to help you make the most of cycling in the French capital. 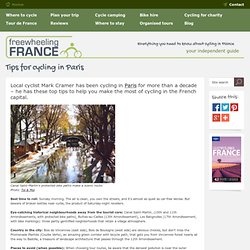 Places to avoid (when possible): When choosing tour routes, be aware that the densest pollution is near the outer motorway (the Périphérique), Champs-Elysées and Place de l’Opera. Lisa Appignanesi's top 10 books about Paris. By an accident of history, I spent part of my early childhood in Paris and French became my first spoken language. 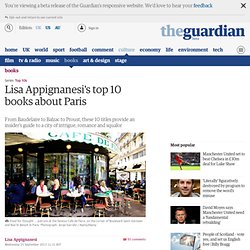 Ever since, no matter how often I've returned, once to live opposite Balzac's failed printing works, Paris has been a city of memory and myth for me. Oddly angled sights and childhood smells live side by side with that dream city built up of the words of novelists and poets. This is the Paris of crowds and contrasts, of forbidden pleasure and desperation, of glitter and nerves, of urbanity and poverty.

English-Speaking doctor in Paris. French expressions you won't learn at school. Règles de français. English-French dictionary - translation - bab.la. To translate a word from English to French, all you need to do is use the search field provided above. 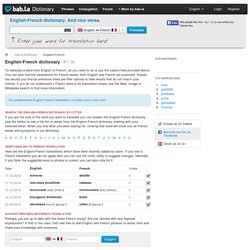 You can also find the translations for French words; both English and French are searched. Should the results you find be extensive there are filter options to hide results that do not match your criteria. If you do not understand a French word or its translation simply use the Web, Image or Wikipedia search to find more information. Search the English-French dictionary by letter If you are not sure of the word you want to translate you can browse the English-French dictionary. Verify English to French translation Here are the English-French translations which have been recently added by users. The Amélie Project. Le Fabuleux Destin de . . . my final project for my Color as Communications class. 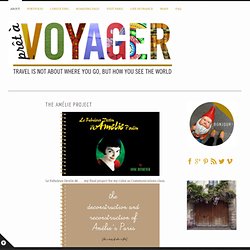 I’ll spare you the 10 page paper and 20-minute presentation on color in Le Fabuleux Destin de Amélie. The format is really designed more for a larger powerpoint style presentation, supplemented by verbal explanation, but you can click on the image to enlarge (and actually read the text). Essentially, this project was inspired by watching the Amélie Director’s Cut [disk 2] with interviews with director Jean-Pierre Jeunet and cinematographer, Bruno Delbonnel. The unsung museums of Paris. Pass through La Pinacothèque during the weekday lunch hour, and you'll soon realise that if there's one thing that rivals a Parisian's obsession with food, it's art. 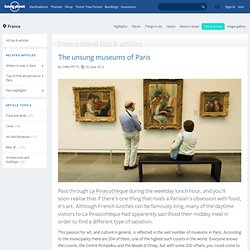 Although French lunches can be famously long, many of the daytime visitors to La Pinacothèque had apparently sacrificed their midday meal in order to find a different type of satiation. This passion for art, and culture in general, is reflected in the vast number of museums in Paris. According to the municipality there are 204 of them, one of the highest such counts in the world. Everyone knows the Louvre, the Centre Pompidou and the Musée d'Orsay, but with some 200 others, you could come to Paris dozens of times and still see something new on each trip. Fans of Impressionism are no doubt familiar with the Monet collections at L'Orangerie or the Musée Marmottan; likewise, enthusiasts of Asian art will have almost certainly heard of the Musée Guimet. Touring Paris’ historic cemeteries. Paris is a city known for its colourful locals and decorative arts – a traveller can find some of the best examples of both simply by visiting one of Paris' several landmark cemeteries. 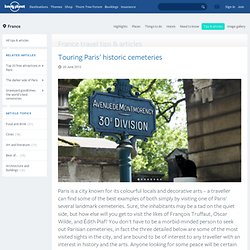 Sure, the inhabitants may be a tad on the quiet side, but how else will you get to visit the likes of François Truffaut, Oscar Wilde, and Édith Piaf? You don't have to be a morbid-minded person to seek out Parisian cemeteries, in fact the three detailed below are some of the most visited sights in the city, and are bound to be of interest to any traveller with an interest in history and the arts. Anyone looking for some peace will be certain to find the beautiful park-like landscapes provide a restful break from the bustle of Paris. 1.

Cimetière du Père Lachaise The world’s most visited cemetery, Père Lachaise (named after a confessor of Louis XIV) opened its one-way doors in 1804. But Wilde’s tomb is not the only grave concern at Père Lachaise these days. 2. The darker side of Paris. Paris basks in its reputation as a glittering capital of fashion, art and culture – but it also has the power to bewitch visitors with more macabre sights. 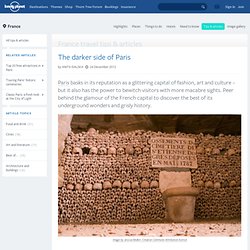 Peer behind the glamour of the French capital to discover the best of its underground wonders and grisly history. Image by Jessica Mullen. Creative Commons Attribution licence Les Catacombes Beneath Paris’ streets lies France’s most famous dark attraction, Les Catacombes. Top tip: queues for the Catacombs can be almost as blood-curdling as the attraction itself – be prepared to wait in line and ideally arrive half an hour before opening time.

Bring a blanket, cheese, bread and wine for a proper Parisian picnic. villette.com/fr/agenda/Cinema-en-plein-air-2012.htm; 19th arrondissement nighthouse Café Maure de la MosquéePart of the Grande Mosquée de Paris, this cafe is in a tranquil, shaded courtyard. Waiters bring mint tea and sweet pastries and you can while away the time admiring the ripening figs overhead.

Paris's top 10 hidden shopping passages. At the end of the 18th century, town planners in Paris created a labyrinth of hidden passages across Paris. Over the years many fell into disrepair or were demolished, but if you know where to look you can still push back a doorway and walk into a fabulous belle époque arcade, a glittering art nouveau galerie or an ancient courtyard. Here are 10 worth tracking down. Passage du Grand Cerf The Grand Cerf was restored to its former glory a few years ago and could be the most beautiful Parisian passage. But it is off the usual tourist track, and rarely crowded, despite being home to a host of tempting shops. Passage Brady. Paris city guide {update} Top 20 free attractions in Paris. City of love, fashion capital, literary paradise…Paris has many different guises. And while museum entry can be steep and fine dining comes at a premium, the French capital can also be a very cheap date.