The 12 Prettiest Streets in Paris. Much of Paris’ charm lies in its cobbled passages, quintessentially Parisian streets and tree-lined avenues, but sometimes you need a little insider knowledge to locate them. 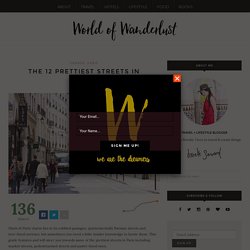 This guide features and will steer you towards some of the prettiest streets in Paris including market streets, pedestrianised streets and pastry-lined ones. Rue Cler. Top 20 Cheap Eats in Paris. Paris has a reputation for its pricey restaurants however there are a bunch of cheap eats in Paris that should be on your radar… at least if not before, then now! 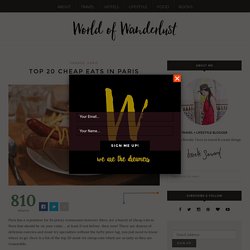 There are dozens of delicious eateries and must-try specialties without the hefty price tag, you just need to know where to go. Here is a list of the top 20 must-try cheap eats which are as tasty as they are reasonable. Falafel from l’As du Falafel On Sunday most of Paris closes, and so the crowds flock in their masses to the Jewish quarter, namely for the falafel. The Middle-Eastern specialty comes overflowing in a pita with a generous portion of hummus, friend aubergine and spicy sauce if requested. Tacos from Candelaria Locals pile through the doors and perch on stalls at Candeleria to satisfy cravings for authentic Mexican food at a reasonable price.

Baguette from Liberty Baguettes warm out the oven, crunchy on the outside and fluffy on the inside are what carb dreams are made of. Macaron from Pierre Hermé Crepes. Paris Day Trip: Château de Bagatelle. A Paris day trip is a part of the Paris experience itself. 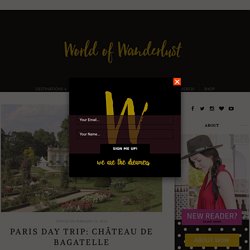 Château de Bagatelle is one such hideaway outside of the city to find yourself enjoying the lush greenery, peacocks and a quintessential picnic hamper in the gardens! Little known to tourists, the Château de Bagatelle is hidden away in the vast Bois de Boulogne, a forest which spans 2090 acres across Paris. Whilst some might deem the castle too close to central Paris to bear the title of a daytrip, we would argue it too beautiful not to, because a full day is required to truly do the grounds justice.

It’s set amongst some of the prettiest gardens in Paris, dotted with pagodas and peacocks it’s impossible not to fall under its charm. History Initially built as a modest hunting lodge in 1720 for the maréchal d’Estrées, it was later knocked down and rebuilt by Louis XVI’s brother in 1775. Charm The castle itself is unassumingly small, but what it lacks in size, it makes up for in charm. Grounds Rose gardens Peacocks. Paris Neighbourhoods: Montmartre Neighbourhood Guide. Montmartre is one of Paris’ most charming neighbourhoods; it’s full of cobbled backstreets, charming squares and is home to the iconic Sacré Cœur basilica. 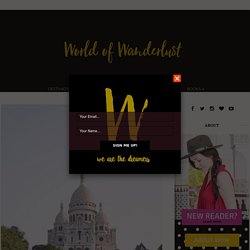 To simply wander around aimlessly would be a day well spent in Paris but to help you uncover the best of the area, we’ve put together an extensive Montmartre Neighbourhood Guide full of our top recommendations. What to Do: Sacré Cœur The Sacré Cœur basilica is a Parisian landmark and is the most common reason that tourists visit the Montmartre neighbourhood. The white dome of the basilica pierces the Parisian sky and can be seen all over the city but nothing beats entering through its doors and marveling at its gold adorned interior.

Views atop Sacré Cœur. Love Paris? Here are 7 books about Paris you must read! I will openly admit that I absolutely adore Paris… and I dare say I’m not the only one. 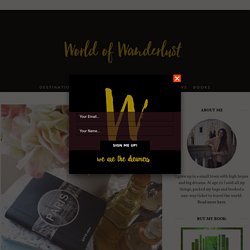 The treelined streets, blossoms in the Spring, Crepes from a corner store… yep, I could easily and happily transport myself there every day with all of my fond memories. It has been a tough year for Paris but the city of lights has continued to shine even brighter than before. If you’re stuck elsewhere (anywhere else but my darling Paris), hen here are 7 books about Paris to transport you there or give you all the info you need for your next visit! Little Black Book Have you ever wanted to land in a city and know exactly where to go, as if you were given a hand written list from a family friend? Paris Letters I can’t tell you how much I loved this book. Lunch in Paris I’m not going to lie, I picked up this book purely because of the small text that states “with recipes”… need I say more? French Phrasebook. The 10 Best Photo Locations in Paris. Paris is hands down the most photogenic city in the world so it’s impossible not to be snap-happy all the time. 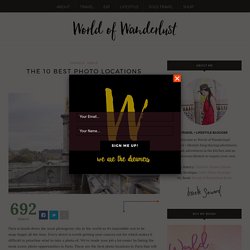 Every street is worth getting your camera out for which makes it difficult to prioritise what to take a photo of. We’ve made your job a lot easier by listing the most iconic photo opportunities in Paris. These are the best photo locations in Paris that will make jaw drops and induce envy into all fellow Paris lovers. These will be the shots that you’ll look back on in years to come and reminisce over. Here’s where to capture the most iconic shots of Paris: Paris Neighbourhoods: Le Marais Neighbourhood Guide. The Marais is one of the oldest areas in Paris. 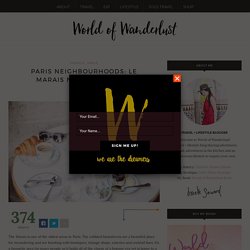 The cobbled backstreets are a beautiful place for meandering and are bursting with boutiques, vintage shops, eateries and cocktail bars. It’s a favourite area for many people as it holds all of the charm of a bygone era yet is home to a wide selection of trendy hangouts. Below is an extensive Le Marais Neighbourhood Guide to ensure you love it as much as every visitor I know.