Witness Says Paris Attackers Were Clean Shaven White Men In A New Mercedes-Benz. According to witness testimony that has been mostly overlooked by the international media, the attackers were described as clean-shaven white men who were driving a brand-new black Mercedes-Benz. 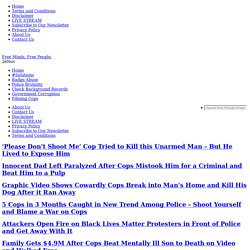 Important Events Leading Up to the November 13 Paris Terrorist Attacks. Sheer Coincidence? We are bringing to the attention of our readers four important events which preceded the Paris attacks. 1. 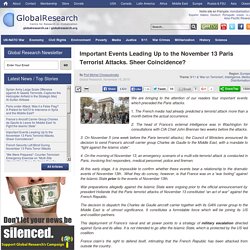 The French media had already predicted a terrorist attack more than a month before the actual occurrence. 2. The head of France’s external intelligence was in Washington for consultations with CIA Chief John Brennan two weeks before the attacks. 3. 4. Were the Paris Attacks Predicted on the January Cover of The Economist? The Economist released in January a cryptic cover entitled “The World in 2015” which featured several enigmatic images. 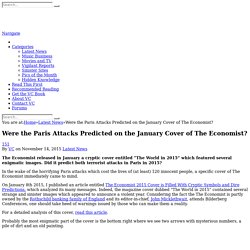 Did it predict both terrorist attacks in Paris in 2015? In the wake of the horrifying Paris attacks which cost the lives of (at least) 120 innocent people, a specific cover of The Economist immediately came to mind. On January 8th 2015, I published an article entitled The Economist 2015 Cover is Filled With Cryptic Symbols and Dire Predictions, which analyzed its many messages. Indeed, the magazine cover dubbed “The World in 2015” contained several strange and sinister images which appeared to announce a violent year. Paris Terror, by Whom? Browse:Home/Paris Terror, by Whom? 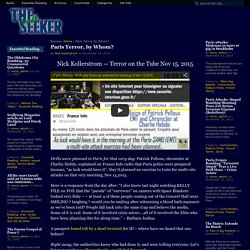 By Nick Kollerstrom on November 15, 2015 Drills were planned in Paris for that very day: Patrick Pelloux, chronicler at Charlie Hebdo, explained on France Info radio that Paris police were prepared because, “as luck would have it”, they’d planned an exercise to train for multi-site attacks on that very morning, Nov 13,2015. Jewish owners recently sold Paris's Bataclan theater, where IS killed dozens. The Bataclan theater, targeted in Friday night’s Paris terror attacks, was Jewish-owned for decades, but was sold two months ago, its former owners said. 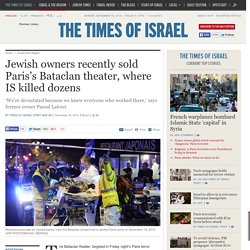 Get The Times of Israel's Daily Edition by email and never miss our top stories Free Sign up! French magazine Le Point said early Saturday that the Bataclan, where at least 80 people were massacred by Islamic State gunmen on Friday night, has for years been the target of anti-Zionist groups as the Jewish owners often put on pro-Israel events. The publication quoted a member of the extremist group Army of Islam, who told French security services in 2011 that, “We had planned an attack against the Bataclan because its owners are Jews.” Paris France "Terrorist Attack" Psyop Hoax - Cafe Suicide Bombing Scene "Forensic Experts" Exposed. FLASHBACK: FRENCH TERROR ALERT (NOV 9, 2015): CIA Plotting November Wave of Islamic Terror in France—ISIS-Inspired Attacks Expected. TRUTHER.ORG — “Peace by Revelation” AUTHOR’S NOTE: Because I, David Chase Taylor, officially applied for political asylum in Switzerland on July 17, 2015, the state-sponsored terror plots and so-called “natural disasters” I expose rarely come to fruition. 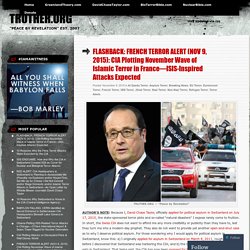 In short, the Swiss CIA does not want to afford me any more credibility or publicity than they have to, lest they turn me into a modern-day prophet. PARIS CLUES: Magic Passports, Drills, Stolen Detonators & The Belgian Cell. Proof Paris Attacks Are State Sponsored Terror Exercise Case Closed. The smoking gun of a false flag event - simply gauge media reaction with other equally tragic events. The albeit hidden Zionist agenda, I say this because Mossad’s motto “BY WAY OF DECEPTION, THOU SHALT DO WAR” should pretty much give it away, that is if one has the capacity to think. 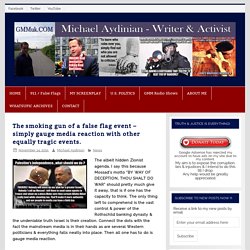 The only thing left to comprehend is the vast control & power of the Rothschild banking dynasty & the undeniable truth Israel is their creation. Connect the dots with the fact the mainstream media is in their hands as are several Western politicians & everything falls neatly into place. Then all one has to do is gauge media reaction. Two weeks ago 224 Russians lost their lives. Hours Before Paris Terror Attack, Facebook Stopped Anonymous From Exposing ISIS Recruiters. Paris Attack 11/2015: Another False Flag Blamed on Muslims? Syrian passport found near Paris’ stadium bomber: sources. BOOM! CIA Director Met with French Security Chief and Mossad Before Paris Attacks.

French president says on national TV that the Illuminati is attacking Paris. Another Paris False Flag Attack? Businessinsider. © AFP Gil Cohen MagenIsraeli Prime Minister Benjamin Netanyahu warns France it would be making a "grave mistake" its parliament votes to recognise a Palestinian state Jerusalem (AFP) - Israeli Prime Minister Benjamin Netanyahu warned Sunday that France's parliament would be making a "grave mistake" if it recognises a Palestinian state in a vote on December 2. 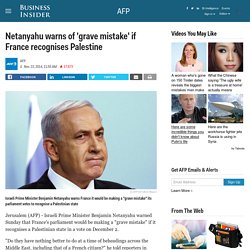 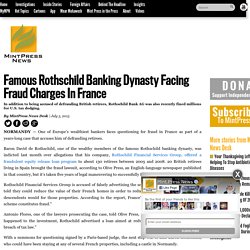 NORMANDY — One of Europe’s wealthiest bankers faces questioning for fraud in France as part of a years-long case that accuses him of defrauding retirees. Baron David de Rothschild, one of the wealthy members of the famous Rothschild banking dynasty, was indicted last month over allegations that his company, Rothschild Financial Services Group, offered a fraudulent equity release loan program to about 130 retirees between 2005 and 2008. 20 British retirees living in Spain brought the fraud lawsuit, according to Olive Press, an English-language newspaper published in that country, but it’s taken five years of legal maneuvering to successfully force the Baron into court.

Also in June, the U.S. “Rothschild Bank, which had U.S. Rothschild Bank was one of 100 firms subject to a probe of overseas banking. Share this article! Print This Story. French government will not sign TTIP agreement in 2015. Matthias Fekl, France's Secretary of State for Foreign Trade, has made it clear that France will not support the inclusion of the Investor State Dispute Settlement mechanism (ISDS) in a potential TTIP agreement. 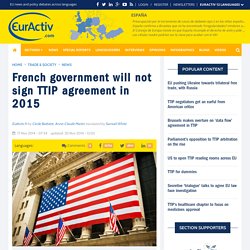 The ISDS is a point of heated debate between the EU and the United States. EurActiv France reports. Europe’s fears over the Transatlantic Trade and Investment Partnership (TTIP) are not abating, while America is beginning to show signs of impatience. Europe and the United States have reached a standoff in the TTIP negotiations, over the question of the Investor State Dispute Settlement. This mechanism could give companies the opportunity to take legal action against a state whose legislation has a negative impact on their economic activity.

Beirut bomb: 'At least 43 dead' in twin Isis suicide blast in Lebanese capital. At least 41 people have died and as many as 100 have been wounded in a suspected twin suicide attack claimed by Isis in Lebanon’s capital Beirut. The explosions are believed to have taken place in a predominantly Shia neighbourhood Burj al-Barajneh, to the south of the city, a city official – speaking on condition of anonymity – told Associated Press. It is thought the attacks, which have been claimed by the extremist Islamic organisation Isis, took place roughly 200 metres from Burj al-Barajneh Palestinian camps, and were detonated during rush hour as the streets were filled with people traveling home. Images on social media showed a scene of devastation, with scores of people running through streets littered with debris. Free to find truth.