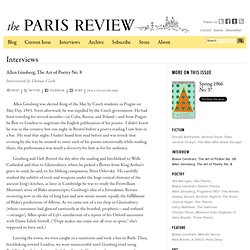 Soon afterward, he was expelled by the Czech government. He had been traveling for several months—in Cuba, Russia, and Poland—and from Prague he ﬂew to London to negotiate the English publication of his poems. I didn’t know he was in the country, but one night in Bristol before a poetry reading I saw him in a bar. He read that night; I hadn’t heard him read before and was struck that evening by the way he seemed to enter each of his poems emotionally while reading them, the performance was much a discovery for him as for his audience. 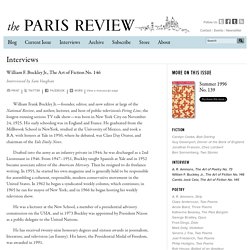 —founder, editor, and now editor at large of the National Review, and author, lecturer, and host of public television’s Firing Line, the longest-running serious TV talk show—was born in New York City on November 24, 1925. His early schooling was in England and France. 76, Robert Pinsky. When Robert Pinsky was named Poet Laureate of the United States earlier this year, it felt deeply appropriate. 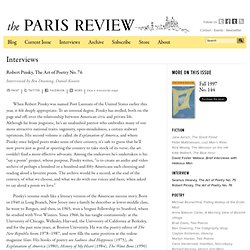 To an unusual degree, Pinsky has mulled, both on the page and off, over the relationship between American civic and private life. Although far from jingoistic, he’s an unabashed patriot who embodies many of our more attractive national traits: ingenuity, open-mindedness, a certain stalwart optimism. His second volume is called An Explanation of America, and where Pinsky once helped poets make sense of their country, it’s safe to guess that he’ll now prove just as good at spurring the country to take stock of its verse; the art couldn’t find a more effective advocate. Among the endeavors he’s undertaken is his “say a poem” project, whose purpose, Pinsky writes, “is to create an audio and video archive of perhaps a hundred or a hundred-and-fifty Americans each choosing and reading aloud a favorite poem. You play the sax?

Is this the same saxophone as in high school? In a way. 28, Henry Miller. In 1934, Henry Miller, then aged forty-two and living in Paris, published his first book. 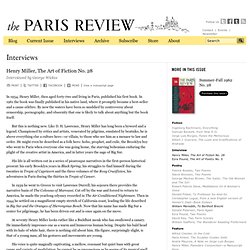 In 1961 the book was finally published in his native land, where it promptly became a best-seller and a cause célèbre. By now the waters have been so muddied by controversy about censorship, pornography, and obscenity that one is likely to talk about anything but the book itself. But this is nothing new. Like D. H. 3, Robert Lowell. On one wall of Mr. 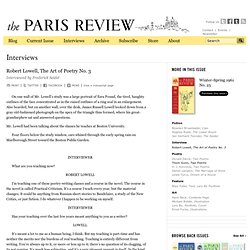 Lowell’s study was a large portrait of Ezra Pound, the tired, haughty outlines of the face concentrated as in the raised outlines of a ring seal in an enlargement. Also bearded, but on another wall, over the desk, James Russell Lowell looked down from a gray old-fashioned photograph on the apex of the triangle thus formed, where his great-grandnephew sat and answered questions. Mr. Lowell had been talking about the classes he teaches at Boston University. Four floors below the study window, cars whined through the early spring rain on Marlborough Street toward the Boston Public Garden. What are you teaching now? I’m teaching one of these poetry-writing classes and a course in the novel. Has your teaching over the last few years meant anything to you as a writer?

157, Peter Matthiessen. Not long after the publication of The Tree Where Man Was Born, Peter Matthiessen’s classic account of travels in East Africa, I overheard a restaurant conversation between two well-dressed men on the general topic of midlife. 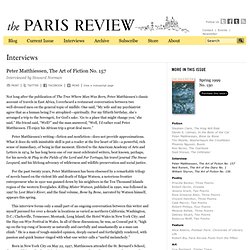 One said, “My wife and my psychiatrist agree that as a human being I’ve atrophied—spiritually. For my fiftieth birthday, she’s arranged a trip to the Serengeti, for God’s sake. ‘Go to a place that might change you,’ she said.” His friend said, “Well?” And the man answered, “Well, I’d rather read Peter Matthiessen. Peter Matthiessen’s writing—fiction and nonfiction—does not provide approximations. 95, Frederick Seidel.

Frederick Seidel lives, as he has for several decades, in a rambling, light-filled apartment on New York’s Upper West Side. 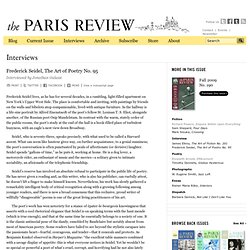 The place is comfortable and inviting, with paintings by friends on the walls and bibelots atop companionable, lived-with antique furniture. In the hallway is a life-size portrait by Alfred Eisenstaedt of the poet’s fellow St. Louisan T. S. 83, Billy Collins. Billy Collins, ca. 2011. 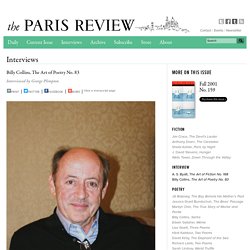 Photograph by David Shankbone The big news, of course, is that Billy Collins has been appointed the new poet laureate by the Library of Congress, now the newest of a distinguished list that among others includes Robert Penn Warren, Joseph Brodsky, Robert Pinsky, and most recently, Stanley Kunitz. Collins’s credentials, despite starting a career as a poet at the late age of forty, are impressive indeed. His various wonderfully named collections of poetry include Video Poems, Pokerface, Questions About Angels, The Art of Drowning, The Apple That Astonished Paris, Taking Off Emily Dickinson’s Clothes and Picnic, Lightning. Sailing Alone Around the Room: New and Selected Poems will be published this fall. The Paris Review’s Favorite Stories: The Millions Interviews Sadie Stein. Lorin Stein, the editor of The Paris Review, was talking a while back with Scott Moyers, who was then a literary agent with The Wylie Agency, which represents the prestigious journal. 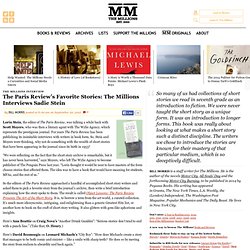 For years The Paris Review has been publishing its inimitable interviews with writers in book form. So, Stein and Moyers were thinking, why not do something with the wealth of short stories that have been appearing in the journal since its birth in 1953? “We were reflecting on the fact that the short story archive is remarkable, but it has never been harvested,” says Moyers, who left The Wylie Agency to become publisher of The Penguin Press last year. 39, Philip Levine.

I was first introduced to Philip Levine through the mail in the summer of 1976. 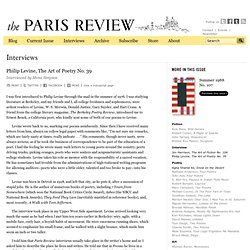 70, Czeslaw Milosz. A loss of harmony with the surrounding space, the inability to feel at home in the world, so oppressive to an expatriate, a refugee, an immigrant, paradoxically integrates him in contemporary society and makes him, if he is an artist, understood by all. Even more, to express the existential situation of modern man, one must live in exile of some sort.

—Czeslaw Milosz, “On Exile” Though Nobelist Czeslaw Milosz considers himself a Polish poet because he writes in that “native mother tongue,” he was not born in Poland, nor has he lived there for over half a century. 92, James Tate. James Vincent Tate was born on December 8, 1943, in Kansas City, Missouri. He was educated at Kansas State College and at the University of Iowa, where he was still a student when his first book, The Lost Pilot (1967), was selected to be published in the prestigious Yale Series of Younger Poets. Since then, Tate has published more than twenty books of poetry, among them The Oblivion Ha-Ha (1970); Viper Jazz (1976); Riven Doggeries (1979); Reckoner (1986); Selected Poems (1991), which won the Pulitzer Prize and the William Carlos Williams Award; Worshipful Company of Fletchers (1994), which won the National Book Award; and most recently Return to the City of White Donkeys (2004).

I read each collection of Tate’s poetry as soon as it came out and have reread them often over the years, but not until I read them all again this year did I have such a clear sense of the magnitude of his achievement. Tate has always had a serious purpose. I mean the ultimate horseshit. It’s both. 46, Jerzy Kosinski. Editor’s Note: The following conversation with Jerzy Kosinski, which does not contain the customary interviewer’s headnote, is a much expanded version of the one that appeared in The Paris Review in 1972.

At that time Mr. Kosinski was traveling abroad and could not be reached when the transcribed text, prepared by interviewers Rocco Landesman and George Plimpton, was ready for his review. 133, James Salter. James Salter is a consummate storyteller. His manners are precise and elegant; he has a splendid New York accent; he runs his hands through his gray hair and laughs boyishly. At sixty-seven he has the fitness of an ex-military man. 190, Javier Marias. A waiter at a restaurant in Madrid gasped when I mentioned that I was in town to interview Javier Marías. “You know him?” He asked, as if I’d named a president or a movie star.

“Sometimes we see him walking down the street.” Although Marías is not yet well known to readers in the United States, in Europe he is a literary and intellectual sensation—the author of eleven novels, two books of short stories, a collection of biographical essays, and a column on politics, literature, film, sports, and social issues for the Madrid newspaper El Pais’s weekly magazine. He is also one of Spain’s leading translators from English. 216, Bret Easton Ellis. Bret Easton Ellis was born in 1964 in Los Angeles, grew up in the San Fernando Valley, went to a local private school called Buckley, and drove his parents’ hand-me-down Mercedes 450SL. “In retrospect, we were pretty well-off,” he told me. “But at the time, I didn’t feel that way. Most of my friends lived in bigger houses in better neighborhoods and drove nicer cars.” In Proust’s Library, Anka Muhlstein. Whether they follow an established tradition or rebel against it, whether they are authors of classics or are considered innovators, rare are the writers who were not also great readers.

Proust was no exception to this rule; reading had always been his earliest and most important source of pleasure and stimulation, and it remained as such. 192, Jorge Semprún. 24, Peter Levi. Besides having a wide reputation in England as a poet, scholar, and Oxford don, Peter Levi is also a translator of Russian and Greek writing. He has traveled extensively through Greece and Afghanistan.