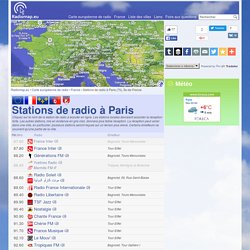 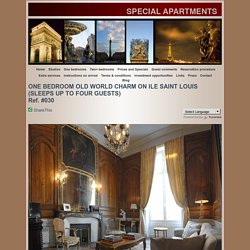 Situated on the 'Etage Noble' (literally, the noble floor) or one and a half flights of stairs up of a beautiful building built in 1763, this 45 square metre (485 sq. foot) apartment has extremely high 4 metre ceilings, orginal parquet de Versailles oakwood floors, large windows, a beautiul decorative 18th century marble fireplace, a crystal chandelier and a beautiful mirror with an original 18th century painting of frolickers. You enter the apartment straight into a dining/study area with its two large windows to your right, looking over a quiet courtyard. Guest apartment services. Selection of good bistros at Paris, Neuilly, La Defense. Beaux Villages - Property South West France - Welcome. 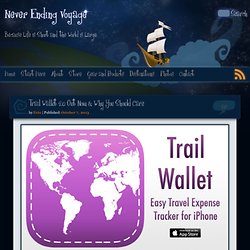 Trail Wallet is an easy travel expense tracker app for the iPhone that we first launched in December last year. Since then it has come a long way. Simon has spent the best part of this year working on improving it and 2.0 is by far our biggest update yet. It’s been a huge amount of work (over 350 hours on this update alone!) And a labour of love for Simon who has pushed his coding skills to the limit. Wow! What’s New in Trail Wallet 2.0? Trail Wallet 2.0′s summary screen, pie chart, and add amount screen. Trips! Those are the main new features but you’ll discover lots of cool new things like an improved history view, extra swipey goodness, and an interactive summary screen that you tap to instantly convert your summaries into all your local currencies.

It really is like a completely new app and the good news is that, if you’ve already bought the app you’ll automatically get the update free! Wireless Hotspot Location Map. Accueil. SNCF (French rail) "boutiques" in Paris - Paris Forum. If you need to buy rail tickets in Paris or make reservations for particular trains using a railpass the obvious place to go is one of the mainline stations. 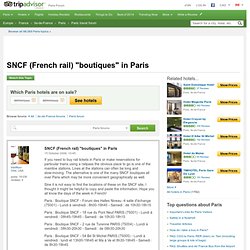 Lines at the stations can often be long and slow-moving. The alternative is one of the many SNCF boutiques all over Paris which may be more convenient geographically as well. Sine it is not easy to find the locations of these on the SNCF site, I thought it might be helpful to copy and paste the information. Hope you all know the days of the week in French!

Paris Bus Lines - Paris Bus Routes - How to Ride Paris Buses - Paris Transportation. When visiting Paris, trying to figure out how to use buses to get around the city can seem like a challenge. 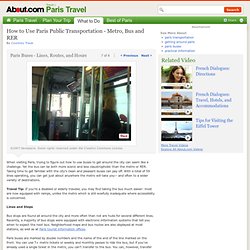 Yet the bus can be both more scenic and less claustrophobic than the metro or RER. Taking time to get familiar with the city's clean and pleasant buses can pay off. With a total of 59 lines operating, you can get just about anywhere the metro will take you-- and often to a wider variety of destinations. Travel Tip: If you're a disabled or elderly traveler, you may find taking the bus much easier: most are now equipped with ramps, unlike the metro which is still woefully inadequate where accessibility is concerned. Lines and Stops Bus stops are found all around the city and more often than not are hubs for several different lines.

Paris buses are marked by double numbers and the name of the end of the line marked on the front. Using Buses to Tour the City? Mon Nicolas le plus proche - Caviste Paris, Magasin vin France - Bars à vin - Nicolas.com - Le specialiste du vin depuis 1822. Outdoor & Covered Markets in Paris, France. As you wander through any one of the Paris markets, the city suddenly exhudes an air of village life — there are no cars in the street, and people take the time to talk to each other again. 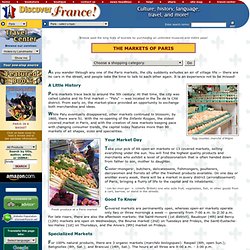