HiP Paris Blog. HiP Paris Blog. Miznon: Israeli Cuisine with a French Twist. September 10, 2015 by Emily Dilling The rue des Rosiers, an iconic street in Paris’ Marais neighborhood, is one of the few that remains reminiscent of the neighborhood’s Jewish community. 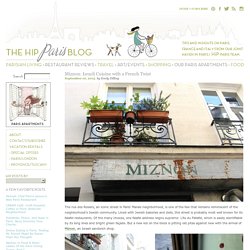 Lined with Jewish bakeries and delis, this street is probably most well known for its falafel restaurants. Of the many choices, one falafel address reigns supreme: L’As du Fallafel, which is easily identifiable by its long lines and bright green façade. But a new kid on the block is pitting old pitas against new with the arrival of Miznon, an Israeli sandwich shop. In the two years since Miznon opened, it has become an instant favorite. Roasted heads of cauliflower are sold as a whole, but also incorporated into one of the best sandwiches on the menu, the Chou Brisé. The waits can be long and the interior chaotic, but clients are calmed by the regularly restocked communal bread basket, where staff members leave the pita bread “heads” as they are sliced off in order to make sandwiches. Related Links:

Where to Buy Made in France Handbags in Paris Marais. I never thought about researching where to buy a handbag on my visit to Paris. 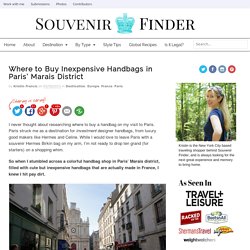 Paris struck me as a destination for investment designer handbags, from luxury good makers like Hermes and Celine. While I would love to leave Paris with a souvenir Hermes Birkin bag on my arm, I’m not ready to drop ten grand (for starters) on a shopping whim. So when I stumbled across a colorful handbag shop in Paris’ Marais district, filled with cute but inexpensive handbags that are actually made in France, I knew I hit pay dirt. Rue de Sévigné in the Marais is a fantastic street for shopping. Parisian brand Brontibay’s Marais shop on rue de Sévigné is eye-candy for handbag lovers. I also loved the medium-size of most of the handbags– surprisingly hard to find. These adorable clochettes were only 29 and 33 euros. Fun bags with a mix of leather and prints (where to buy inexpensive handbags in Marais, Paris). I am a sucker for Liberty prints. I love ultra slim handbags, it’s hard to over stuff them.

Pin it! Finding Your Creativity in Paris with SEYMOUR+ September 3, 2015 by Amy Thomas Camille Malissen When I moved to Paris six years ago, one of the greatest things that happened to me was meeting Melissa Unger. 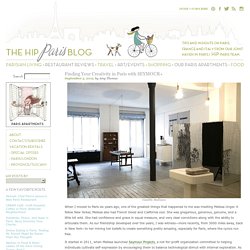 A fellow New Yorker, Melissa also had French blood and California cool. Le Bon Saint Pourçain: Back with New Owners and a Traditional-Modern Mix - The HiP Paris Blog. Aug 18, 2015 02:02 pm | Sylvia Sabes For years, dining at Le Bon Saint Pourçain was like stepping into a time machine set to the 1950s. 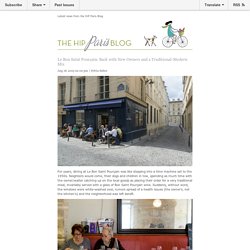 Neighbors would come, their dogs and children in tow, spending as much time with the owner/waiter catching up on the local gossip as placing their order for a very traditional meal, invariably served with a glass of Bon Saint Pourçain wine. Suddenly, without word, the windows were white-washed over, rumors spread of a health issues (the owner’s, not the kitchen’s) and the neighborhood was left bereft. This spring, two years after the sudden loss, activity could be seen behind the now flaking window paint. There were shadows inside and the sound of buzzing power tools competed with birdsong. Slowly, joy spread throughout the neighborhood as we learned that David Lanher, the man behind the fabulous Racines restaurant, would be filling the void.

Like most of the past regulars, we could not wait for the doors to open. Next stop Paris: Secrets of France's greatest stations. The center of Paris might be just a few miles across, but it's served by seven major stations, some within spitting distance of each other. 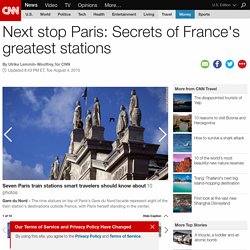 All stations serve a different region, with the clue often being in the name. Gare du Nord connects destinations north of Paris while Gare de Lyon's lines head in the general direction of France's third biggest city. Each station tells a story of the world's ongoing love affair with train travel. These grand structures were designed to make the best possible first impression on travelers from around the world, often with monumental artworks. They're still doing so today. HiP Paris Blog. Paris by Boat: Discovering the French Capital’s Beautiful Waterways. June 4, 2015 by Emily Dilling Edhral Paris is a city easily explored by foot, with seductive small streets and cobblestoned alleyways inspiring you to extend your stroll just a little longer. 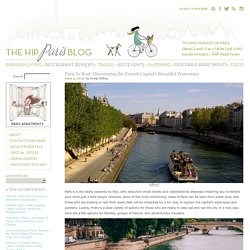 However, some of the most enchanting views of Paris can be seen from water level, and those who are looking to rest their weary feet will be rewarded by a fun way to explore the capital’s waterways and gardens. HiP Paris Blog. Off-the-Beaten-Path Paris Museums: Art Outside the Louvre and Musée D’Orsay. April 20, 2015 by Jaimie Evoy for Context Travel Palais Galliera, Pierre Metivier It’s true that even “seasoned” visitors to Paris (or residents!) 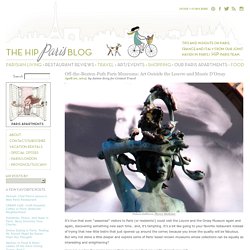 Could visit the Louvre and the Orsay Museum again and again, discovering something new each time.. and, it’s tempting. It’s a bit like going to your favorite restaurant instead of trying that new little bistro that just opened up around the corner, because you know the quality will be fabulous. But why not delve a little deeper and explore some of Paris’ lesser-known museums whose collections can be equally as interesting and enlightening? 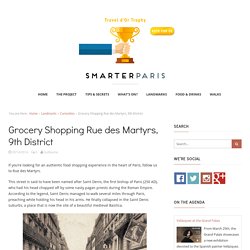 This street is said to have been named after Saint Denis, the first bishop of Paris (250 AD), who had his head chopped off by some nasty pagan priests during the Roman Empire. According to the legend, Saint Denis managed to walk several miles through Paris, preaching while holding his head in his arms. He finally collapsed in the Saint Denis suburbs, a place that is now the site of a beautiful medieval Basilica. Once known for its dodgy bars and restaurants, Rue des Martyrs, in the 9th district, is now a sophisticated destination for anyone in need of culinary inspiration. When I was growing up, this neighbourhood was still a little run down and dirty, although just as lively and popular as it is today. Let’s embark on a quest along Rue des Martyrs to create a grocery basket for the perfect Parisian dinner. LIZA Lebanese Restaurant: From Beirut to Paris with Liza Asseily. February 18, 2015 by Rooksana Hossenally Liza Asseily I recently made my way from the Palais Brogniart in Bourse to the lively Lebanese restaurant LIZA on rue de la Banque, which lines the AFP headquarters. 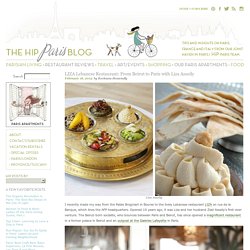 Opened 10 years ago, it was Liza and her husband Ziad Asseily’s first-ever venture. The Beirut-born socialite, who bounces between Paris and Beirut, has since opened a magnificent restaurant in a former palace in Beirut and an outpost at the Galeries Lafayette in Paris. “The Paris restaurant is my baby but I love all my projects – even the bakery. Edouard Sicot. Le Super Petit Marché: A Retro Grocer Selling Artisanal & Local Produce in Paris’ 18ème. January 15, 2015 by Elena Berton When Martine Boutin left corporate life in Paris’ La Défense business district to become her own boss, she first considered opening a dating agency or a cheese restaurant. 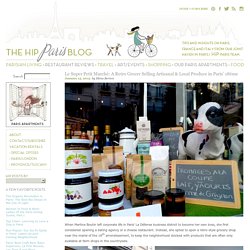 Instead, she opted to open a retro-style grocery shop near the mairie of the 18th arrondissement, to keep the neighborhood stocked with products that are often only available at farm shops in the countryside. Martine, the granddaughter of farmers, grew up in a small country village of 700 in the department of Vendée, between the Atlantic Coast towns of Nantes and La Rochelle, so turning to farm products was an obvious step for her.

She found the products she wanted to sell after meeting with farmers and artisans at the Paris International Agricultural Show, then she came across an empty storefront on Rue Ordener, a former florist shop with original tiles dating back to the late 19th century. “I wanted a joyful place,” she says. Le Poutch: Coffee, Breakfast and Brunch on Paris’ Hip Canal Saint Martin. December 22, 2014 by Lauren Sarazen Rife with hip cafés, the web of streets surrounding the Canal St. Martin are a hipster haven, boasting savvy coffee and lunch options to locals and visitors alike. Café Le Poutch may be new to the scene, but it’s already made 13, rue Lucien Sampaix its own.

Butternut squash quiche, savory muffins, or riz au lait with orange zest are just a glimpse of the culinary fare. 10 Things You Didn't Know About Paris. Du Pain et des Idees - Paris, France. Day Trips from Paris: Château de Fontainebleau, Château de Malmaison & More. December 8, 2014 by Casey Hatfield-Chiotti Château de Fontainebleau, Richard White From strolling the various quartiers to visiting museums to checking out the new “it” restaurants, there is no end to what you can see and do in Paris.

Still, I must admit, some of my favorite days have been spent escaping the city. Many fascinating day trips are reachable by an easy train or car ride and while Versailles is by far the most famous and popular, there are other great places to visit that are just as interesting, and far less crowded. My French Life™ - Ma Vie Française® Share Comment Paris has an endless supply of charming and unique little quartiers off the beaten path. There is something particularly special, je pense, about the ninth-arrondissement district of Saint-Georges – a quiet corner nestled between the busy areas of Saint Lazare and Pigalle. Just north of the wide boulevards of Opéra and the bustling transport hub of Saint Lazare, and mere minutes’ walk south of the red light district, Pigalle, lies the quiet quartier of Saint-Georges.

The Elegant Eighth: Affordable Food and Superb Culture in Paris’ Chic Business District. November 26, 2014 by Daisy de Plume 8th arrondissement, Rebecca Plotnick For many Parisians, a people who don’t typically identify themselves with their jobs, the Eighth Arrondissement represents the office. La Jeune Rue: The Latest Cultural and Culinary Initiative in Paris’ Marais. November 24, 2014 by Emma Stencil Rue de Vertbois, Emma Stencil Three quiet streets in Paris’ Marais neighborhood are the site for one of the most interesting projects of the year. The name Cédric Naudon, French entrepreneur and millionaire, was splashed all over the French press this spring with the announcement of his sensational initiative La Jeune Rue. 50 Common French Phrases Every French Learner Should Know - Talk in French. Reading time: 3 minutes Difficulty: Beginner – Intermediate Sometimes, it is great to memorise some phrases that might come handy when in discussion with a French native-speaker.

Where to Drink the Best Coffee in Paris. Wine, cheese, coffee and pastry- the bedrock of most idyllic Parisian holidays. And while the city delivers on nearly each of these crucial comestibles, they've fallen terribly short for years when it comes to the swill masquerading as coffee. That's right, le café has been much maligned (I've alluded to this HERE and in this interview) and with good reason - the beans (typically Robusta) tend to be substandard in quality and over-roasted; the machines are old and ill-managed and the baristas are either poorly trained or completely indifferent (or both). Galerie Vivienne - SmarterParis city guide. Fontaine Saint-Michel - SmarterParis city guide. Arriving in Paris - SmarterParis. Flea markets in Paris – Time Out Paris. Paris Farm-to-Table Restaurants: Delicious, Local and Fait Maison.

The 7th Arrondissement in Paris - Quintessential Parisian Neighborhood. Budget Paris - Paris on the cheap - how to do more with less. Free Things to Do in Paris. Paris: Ten Insider Museum Tips. Free admission and good deals in museums and monuments in Paris - Paris for free - Paris tourist office. Fodor's Paris 2014 (Full-color Travel Guide) eBook: Fodor's: Kindle Store. Paris in April - Weather, What to Pack, What to See.