Recommended Podcasts for Francophiles  - Secrets of Paris - Tours and Travel Planning. I love listening to podcasts when I'm running around Paris, making dinner, or looking for an a local alternative to NPR. 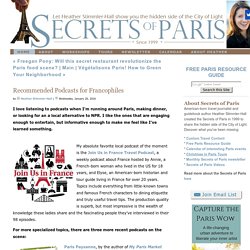 I like the ones that are engaging enough to entertain, but informative enough to make me feel like I’ve learned something. My absolute favorite local podcast of the moment is the Join Us in France Travel Podcast, a weekly podcast about France hosted by Annie, a French-born woman who lived in the US for 18 years, and Elyse, an American-born historian and tour guide living in France for over 20 years. Topics include everything from little-known towns and famous French characters to dining etiquette and truly useful travel tips. The production quality is superb, but most impressive is the wealth of knowledge these ladies share and the fascinating people they’ve interviewed in their 98 episodes. For more specialized topics, there are three more recent podcasts on the scene:

Hidden Streets of Paris, Off the Beaten Path in the City of Light. As a tour guide I’ve seen my fair share of the trodden tourist lanes. 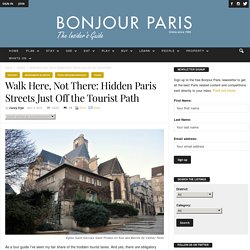 And yes, there are obligatory museum and monument stops that deserve your attention. But the real fun comes in discovering what lays beyond—and in some cases mere steps from—the predictable sightseeing ruts. Here are a few of my favorite alternatives to help detach you from the masses and seek out a more well-rounded (and individualized) Paris. Where you are: Place de l’Hotel de Ville Where you should be: Rue des Barres This one’s not only a tranquil escape from the clamor of City Hall and Rue de Rivoli, but it’s one of my all-time favorite streets. The street’s gentle incline once protected the area during repeated river flooding which made it one of the few spots where anything solid could be built. 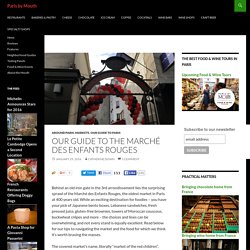 While an exciting destination for foodies – you have your pick of Japanese bento boxes, Lebanese sandwiches, fresh pressed juice, gluten-free brownies, towers of Moroccan couscous, buckwheat crêpes and more – the choices and lines can be overwhelming, and not every stand is equally excellent. Read below for our tips to navigating the market and the food for which we think it’s worth braving the masses. The covered market’s name, literally “market of the red children”, references its origins as an orphanage where the children were dressed in red, the color of Christian charity. A market established on the site in 1615 became a hub of life in the Marais, but was threatened during the 1990s when the Mayor wanted to tear down the historic structure and turn it into a parking garage. BURGERS: Le Burger Fermier des Enfants Rouges. Photos actuelles de Paris et cartes postales des années 1900-1935. The best breakfasts in Paris - Holidays. A coffee and croissant, staples of a French breakfast © Fotolia Ivan Kruk - Fotolia Join our food columnist Rosa Jackson on an early-morning foodie tour of the capital I fell in love with Paris through its breakfast pastries, and nothing much has changed in the past few decades. 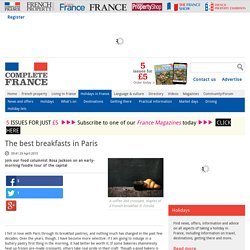 Over the years, though, I have become more selective: if I am going to indulge in a buttery pastry first thing in the morning, it had better be worth it. If some bakeries shamelessly heat up frozen pre-made croissants, others take real pride in their craft. Brioche: Bread & Roses, 62 Rue Madame, 6th arrondissement You can’t go wrong with any of the organic breads and pastries at this café-bakery, but nothing beats their cloud-like brioche, sold in its own little basket for you to pick off the shelf. Croissant: Boulangerie Pichard, 88 Rue Cambronne, 15th Not many tourists wander into this residential district, but it’s worth it for the outstanding breads and croissants at this family-run bakery.