Denzel Washington's Life Advice Will Leave You SPEECHLESS. The Inspirational Story Of 9-Year-Old Ezra Frech. Ohio Boy’s $20 Gift to Soldier Multiplies. Youtube. Oprah Winfrey on Career, Life and Leadership. The most motivating 8 min of your life! Why Do We Fall - Motivational Video. Kid President - AWESOME GIRLS! J.K. Rowling Speaks at Harvard Commencement. Teen Girl Rebuilds Car from Scratch. LIAM 108 - Self-Talk Determines Success! Your self-talk is the largest determining factor for your success in any area of life! 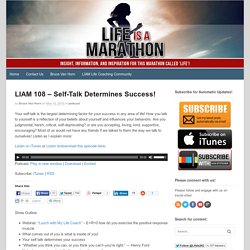 How you talk to yourself is a reflection of your beliefs about yourself and influences your behaviors. Are you judgmental, harsh, critical, self-deprecating? Or are you accepting, loving, kind, supportive, encouraging? E + R = O and possibly 14-0. The biggest development during Ohio State’s first game week has nothing to do with the opponent or even national championship hopes. 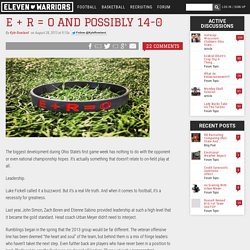 It’s actually something that doesn’t relate to on-field play at all. Leadership. Luke Fickell called it a buzzword. But it’s a real life truth. And when it comes to football, it’s a necessity for greatness. Last year, John Simon, Zach Boren and Etienne Sabino provided leadership at such a high level that it became the gold standard. Rumblings began in the spring that the 2013 group would be far different.

The Best Motivational Video - Be Phenomenal. Honda the Power of Dreams Failure: The Secret to Success. 4 inspiring kids imagine the future of learning. After more than 13 years of research convinced him that children have the ability to learn almost anything on their own, 2013 TED Prize winner Sugata Mitra aspires to shape the future of learning by building a School in the Cloud, helping kids “tap into their innate sense of wonder.” 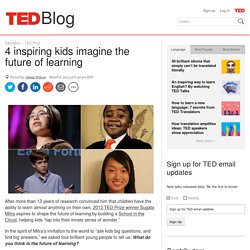 In the spirit of Mitra’s invitation to the world to “ask kids big questions, and find big answers,” we asked four brilliant young people to tell us: What do you think is the future of learning? Here, their answers. Adora Svitak, 15-year-old writer, teacher and activist “One of the most powerful shifts in the future of education will come from not only the tools at our disposal, but from an underutilized resource: the students whose voices have for too long been silent. 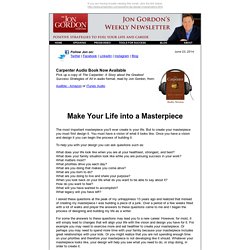 But to create your masterpiece you must first design it. Ten Choices You Will Regret in 10 Years. What it’s like to grow old, in different parts of the world. At TED2013, Jared Diamond shares some of his research on how different societies treat the elderly. 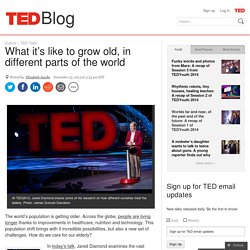 Photo: James Duncan Davidson The world’s population is getting older. Across the globe, people are living longer thanks to improvements in healthcare, nutrition and technology. This population shift brings with it incredible possibilities, but also a new set of challenges. YouTube on Twitter: "Kid President asked you for life advice and this is what you said. Inbox. One Stitch Closer: Veronika empowers other women. Your Words Matter. Your Words Matter. 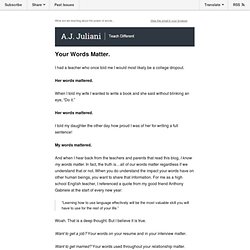 I had a teacher who once told me I would most likely be a college dropout. Her words mattered. When I told my wife I wanted to write a book and she said without blinking an eye, “Do it.” I told my daughter the other day how proud I was of her for writing a full sentence! My words mattered. And when I hear back from the teachers and parents that read this blog, I know my words matter. “Learning how to use language effectively will be the most valuable skill you will have to use for the rest of your life.” Woah. Want to get a job? Want to get married?

Want to sell something? What Are We Teaching Our Children About Their Words? The problem I see across the board in schools and in the workplace, is that most people rarely think about the power their words have to make a positive impact. 5 Reasons To Write A Letter To Your Future Self. In March, I turned twenty-five years old, and on that most dreaded day I received a letter from my twelve year-old-self. 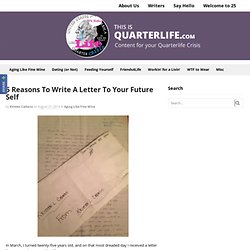 At twelve, I distinctly remember listening to Britney Spears’ “Ooops I did it Again,” consuming Fruit by the Foot, surviving Y2K, and wearing checkered school jumpers that came down to my knees. It was that magical time right before pimples started growing uncontrollably and watching Saturday morning cartoons was still acceptable. Oh how much has changed since those simple times. Reading my letter evoked a lot of emotions in the span of two minutes. It was hilarious that I questioned my own ability to achieve higher education, or better yet, to even have higher education as my main concern at the age of twelve. How Facebook’s newest teen engineer supported his family with apps until cashing in. There’s nothing that highlights the fact that Silicon Valley is the new Wall Street, gold rush, colonial settlement — insert your American Dream rags-to-riches historical moniker here — quite like the story of 18-year-old Miami resident Michael Sayman. 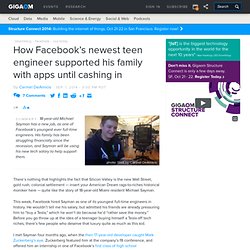 This week, Facebook hired Sayman as one of its youngest full-time engineers in history. He wouldn’t tell me his salary, but admitted his friends are already pressuring him to “buy a Tesla,” which he won’t do because he’d “rather save the money.” Before you go throw up at the idea of a teenager buying himself a Tesla off tech riches, there’s few people who deserve that luxury quite as much as this kid. I met Sayman four months ago, when the then 17-year-old developer caught Mark Zuckerberg’s eye. Zuckerberg featured him at the company’s f8 conference, and offered him an internship in one of Facebook’s first class of high school interns. He had poured the last year of his life into building the game, which was a version of charades. Rita Pierson: Every kid needs a champion. The Dalai Lama's 18 Rules For Successful Living. Why I Think This World Should End. David Steindl-Rast: Want to be happy? Be grateful. The True Story of Kid President. Kid President's Pep Talk to Teachers and Students!