Have Faith That God Will Send You The Right Person At The Right Time. Have you ever felt like you’ve reached your breaking point? 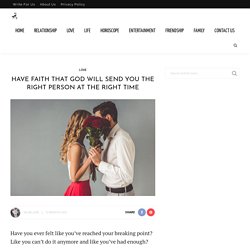 Like you can’t do it anymore and like you’ve had enough? Enough of the wrong men entering your life, enough of trying to be strong and tough by yourself, enough of toxic assholes who want to ruin you, enough of failed relationships and enough of heartbreaks? Have you ever been one step away from completely giving up on love? One step from accepting that you’re not meant to be loved and that you’ll never find your soulmate?

Here’s How You Say Goodbye To A Relationship You Were Never In. No matter what anybody says, there doesn’t have to be a label for the feelings to be real. 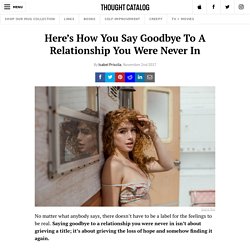 Saying goodbye to a relationship you were never in isn’t about grieving a title; it’s about grieving the loss of hope and somehow finding it again. You have to let it hurt. Let yourself cry over him. Let yourself sleep in way too long to avoid thinking about anything. How To Come To Terms With A Relationship That Ended Before It Began. We've all had one. 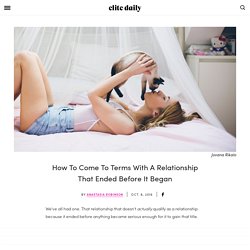 That relationship that doesn't actually qualify as a relationship because it ended before anything became serious enough for it to gain that title. Not only is it awkward to explain, there are also a few things that inevitably follow when a relationship ends before it even began, the first being radio silence. You talked every day, starting with that smile inducing "Good morning" text, and ending with a goodnight snapchat under the covers of your dark room. Then, all of a sudden, there were no responses to your text messages, your snapchats had the ever-so-annoying open arrow next to them and there was no explanation for any of it. If He Wants You He’ll Be With You It’s That Simple. If he truly wants to be with you, he will make the time. 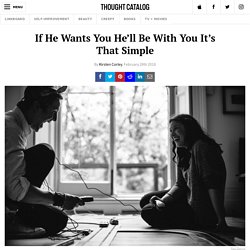 Busy is a word we’ve allowed men to use for treating us badly or not up to the standard we deserve. Someone who really wants you and really wants to be with you will make that happen. There is no grey area when it comes to interest. There’s no what-ifs or maybes or almost. 8 Mistakes Rookie Parents Make. 15 Everyday Habits to Boost Your Libido.

10 Best States for Working Mothers. 12 Ways To Save Your Marriage. "We have double standards. 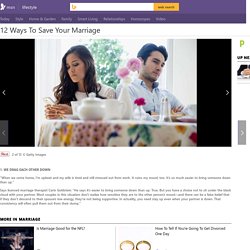 He'll say, 'You can't watch Gossip Girl if I'm around,' but often flips to golf when I'm there. And when it comes to chores, he makes me feel like I'm asking for so much when I ask him to do something, when I do most of the cleaning, all the cooking, social planning, etc. " Says Brosh: "I ask couples if they are 'showing or shoving love.' Many times, couples do things in a relationship that they presume their partner is receiving as love: chores, letting their partner watch their favorite TV show. But not everyone gives and receives in the same way. 12 Hairstyles Men Love. 12 Lessons Learned In 12 Years Of Marriage. This list could be a mile long. 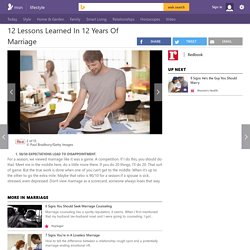 I didn't touch on things like honesty, making time for dates and speaking highly of your spouse. But all the lists in the world won't keep your marriage strong if it lacks love. In the end, love wins. It conquers all. It removes doubt. This story originally appeared on The Huffington Post, courtesy of Justin Ricklefs.Justin is a sales guy at heart, who loves the art of putting a good deal together. 5 Things No One Ever Told Me About Married Sex. Why Is TV So Down on Marriage? 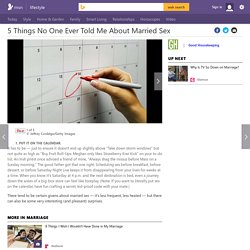 News flash, execs—it's not all downhill after "I do. " We swear. Believe it or not, there was once a show about a monogamous couple living in Manhattan, now TV’s acknowledged capital of singledom. The show was Mad About You , and at the time the effortlessly witty newlyweds Paul and Jamie were my favorite New York characters on TV. But they weren't the only ones making marriage look good: I grew up in the golden age of the committed sitcom couple. The 9 Best Times to Have Sex. Entertainment - 18 absolutely stunning wedding makeup looks for brides. 14 Ways You Know You've Found "The One" 40 Beautifully Touching Mother/Daughter Tattoos. 12 Dating Rules to Break Now. 7 ways to know you belong together. My husband and I disagree on a lot of things: I find Game of Thrones too gory, believe pink should be incorporated into every design scheme, and then there’s the real stuff, like the fact that we were brought up practicing different religions, and that we’ll have to figure out how to raise our kids. 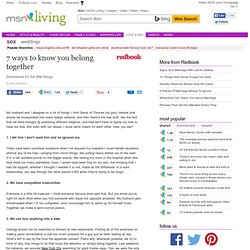 But even with our issues, I know we're meant for each other. How, you ask? 1. I tell him I don't need him and he ignores me. There have been countless occasions when I’ve assured my husband I could handle situations without any of his help—ranging from minor things, like pulling heavy dishes out of the oven (I’m a tad accident-prone) to the bigger events, like visiting my mom in the hospital when she took three too many painkillers. 2. Everyone is a little bit insecure. 3. Outings should not be restricted to dinners at new restaurants. 4. 5. He’ll probably be peeved at me for admitting this (sorry, Ben!) 6. 7. He’s a huge Steven Seagal fanboy.

10 habits parents need to break - Family Moments - Family and Parenting. All of these are great. 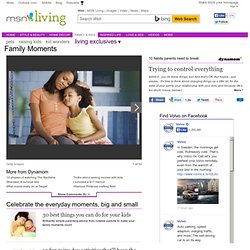 My advice to parents, if your kid is playing sports don't just drop them at the practice and leave. Stay and watch how all the kids interact. Listen to the coaches and try to learn the rules and maybe some of the finer points of the game. I found that so interesting, and learned a ton. Also, after the game leave them alone. How to Show a Man You Love Him - How to Show Your Love. 8 Proven Tricks to Strengthen Your Marriage. Top wedding guest complaints (and how to avoid them) Take ALL wedding pics before the ceremony (except the reception ones, of course) There's a rule that you start the reception (start the toasts) no later than 1 hour after saying I do. 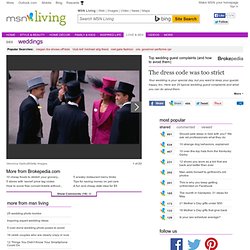 That means that you must get to the reception, move your reception line along, and get seated in 1 hour. DO IT! Make sure that everyone has a chance to get a drink in their hand before the toast. People are incredibly stupid and thoughtless about this. Cut the cake immediately after the meal. 10 Surprising Ways to Test Your Compatibility. 18 Ugly Truths About Modern Dating That You Have To Deal With.

16 Things We Forget To Thank Our Moms For. 1. All the times she had to double as best friend/counselor/therapist/costume designer/hair stylist/coach/all-around-solver-of-every-problem-ever. I remain unconvinced that moms aren’t actually superheroes in disguise. 2. Forgiving us when we forget to call. 3. Making the most of playtime when it doesn't come naturally. Mom topics Jacoba Urist TODAY contributor Feb. 3, 2014 at 1:50 PM ET For some parents, playing with their child is the most natural thing on earth. For others, it can be a source of shame and frustration. 24 Rules For Being A Gentleman In 2014. The Age of the Gentleman — that semi-imaginary time we all have in our heads where men you actually wanted to sleep with wore fedoras and treated ladies like ladies — might be over, but there’s no reason it can’t come back next year.

We just need to set up a few ground rules for being a modern Cary Grant/Paul Newman/Ken Cosgrove. We’ll all be drinking scotch and wearing linen suits again in no time. 1. Have a signature drink that you both can make at home after a long day’s work, and order with effortless swag at any bar you happen to be in. (This means no complicated ingredients and easy substitutes. 2. 3.

Signs He's Just Too Young to Date. 8 Winter Date Night Ideas. Which Disney Engagement Ring Are You? The Passive Aggressive Giver's Gift Guide. Different Strokes: 15 Soft Spots That Drive Him Crazy. 20 Kissing Techniques for Any Occasion. Top baby names of 2013 - Raising Kids - Family-Parenting. George new Prince among baby names. By Pamela Redmond Satran, Nameberry.com The newborn British prince has propelled the name George nearly halfway up the most popular boys’ baby names list, according to the website Nameberry. 16 Weird Things Best Friends Do That Prove They’re Your Soul Mates. 1. 19 Tips To Be A Best Kisser. 9 Signs You're Becoming a Snob. The 10 phrases that make men go ballistic. Have you made these parenting mistakes? The 25 all-time greatest movie love stories. 10 Things Never to Say on a First Date. 7 compromises couples should make. The usual non sense.