Correlation vs. Causation: Differences & Definition. When conducting experiments and analyzing data, many people often confuse the concepts of correlation and causation. 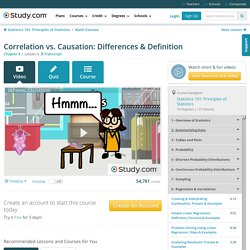 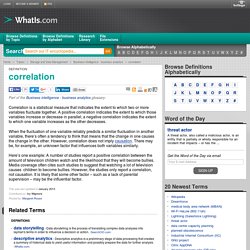 A positive correlation indicates the extent to which those variables increase or decrease in parallel; a negative correlation indicates the extent to which one variable increases as the other decreases. When the fluctuation of one variable reliably predicts a similar fluctuation in another variable, there’s often a tendency to think that means that the change in one causes the change in the other. However, correlation does not imply causation.

There may be, for example, an unknown factor that influences both variables similarly. Correlation and Causation. Correlation and causation, closely related to confounding variables, is the incorrect assumption that because something correlates, there is a causal relationship. 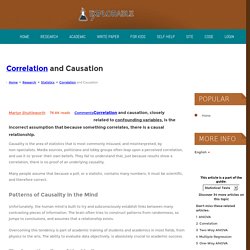 Causality is the area of statistics that is most commonly misused, and misinterpreted, by non-specialists. Media sources, politicians and lobby groups often leap upon a perceived correlation, and use it to 'prove' their own beliefs. ‘Real men wear kilts’: Men may boost fertility by wearing Scottish garb. Meggings may be all the rage these days as far as male fashion trends go, but a new study by researchers in The Netherlands says men looking to have children should opt for going full commando, preferably under a traditional Scottish kilt. 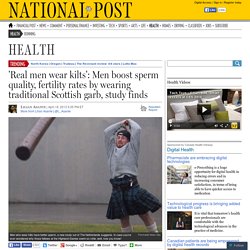 “We cannot say that it has a causal effect, but I think other studies have shown that saturated fat intake has shown a connection to other problems and now also for sperm count,” said Tina Jensen, the study’s lead author. Want to increase your fertility? Try wearing a kilt! - Seriously, Science? Heavy drinking is bad for marriage if one spouse drinks, but not both. BUFFALO, N.Y. – Do drinking and marriage mix? 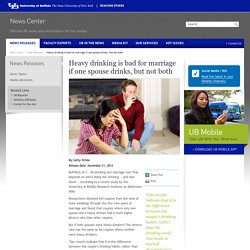 That depends on who’s doing the drinking — and how much — according to a recent study by the University at Buffalo Research Institute on Addictions (RIA). Researchers followed 634 couples from the time of their weddings through the first nine years of marriage and found that couples where only one spouse was a heavy drinker had a much higher divorce rate than other couples. But if both spouses were heavy drinkers? The divorce rate was the same as for couples where neither were heavy drinkers. Study Links Melanoma to Viagra Use. Medical researchers are studying a connection between erectile dysfunction medications and melanoma, a deadly form of skin cancer. 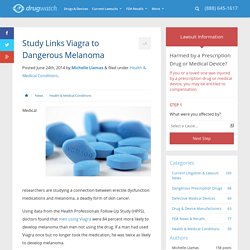 Using data from the Health Professionals Follow-Up Study (HPFS), doctors found that men using Viagra were 84 percent more likely to develop melanoma than men not using the drug. If a man had used Viagra once but no longer took the medication, he was twice as likely to develop melanoma. Sildenafil, the clinical name for Viagra, affects the cell pathways that allow melanoma to spread (metastasize) to other parts of the body. Once it starts to spread, melanoma can be difficult to control and can end in death. Like other skin cancers, melanoma is largely associated with too much exposure to the sun, especially without sunscreen.

Dr. “People who are on the medication (Viagra) and who have a high risk for developing melanoma may consider touching base with their primary care providers,” Qureshi told NBC News. 76,000 Cases of Melanoma Diagnosed a Year Dr. Erectile dysfunction drugs unlikely to cause melanoma, researchers conclude. A rigorous analysis of more than 20,000 medical records concludes that erectile dysfunction drugs, such as Viagra, are not a cause of melanoma, an often deadly form of skin cancer, despite the higher risk for the disease among users of these drugs. 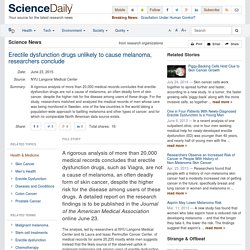 A detailed report on the research findings is to be published in the Journal of the American Medical Association online June 23. The analysis, led by researchers at NYU Langone Medical Center and its Laura and Isaac Perlmutter Cancer Center, of medical records for some 20,235 mostly white men suggests instead that the likely source of the observed uptick in malignant melanoma risk among users of erectile dysfunction drugs is socioeconomic and lifestyle based.

Among the more than 20,000 men whose records were studied, 4,065 were found to have malignant melanoma between 2006 and 2012. The NYU Langone team and their colleagues in Sweden also found no correlation between the more advanced stages of the disease and drug usage.