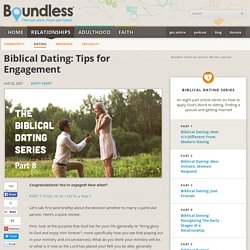 You're engaged! Now what? PART 7: From 'Hi' to 'I Do' in a Year » Let's talk first (and briefly) about the decision whether to marry a particular person. Here's a quick review: First, look at the purpose that God has for your life (generally to "bring glory to God and enjoy Him forever"; more specifically how you see that playing out in your ministry and circumstances).

Next, look more closely at Ephesians 5:22-33. Also, what do others (those that both of you have been seeking counsel from, under whose authority the relationship has taken place, Christian friends or family) think of the relationship? Finally, is there an affection for this person in my heart and mind based on the way God has defined biblical manhood and womanhood? Off You Go If you get through all that soul-searching, you may decide (probably separately at this point) that marriage between the two of you is the right thing before the Lord.

OK, congratulations, you're engaged. Is it a bad idea to get married while in college? Question I am 20 years old and am dating another junior who attends my university. 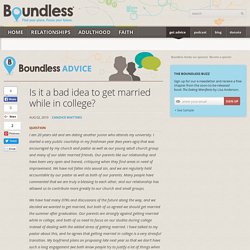 I started a very public courtship in my freshman year (two years ago) that was encouraged by my church and pastor as well as our young adult church group and many of our older married friends. Our parents like our relationship and have been very open and honest, critiquing when they find areas in need of improvement. We have not fallen into sexual sin, and we are regularly held accountable by our pastor as well as both of our parents.

Recognizing Spiritual Leadership in the Little Things. Spiritual intimacy in marriage can be a confusing and painful issue for many couples. 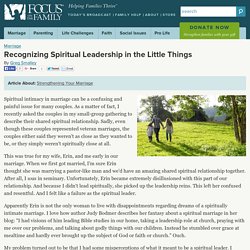 As a matter of fact, I recently asked the couples in my small-group gathering to describe their shared spiritual relationship. Sadly, even though these couples represented veteran marriages, the couples either said they weren't as close as they wanted to be, or they simply weren't spiritually close at all. This was true for my wife, Erin, and me early in our marriage. When we first got married, I'm sure Erin thought she was marrying a pastor-like man and we'd have an amazing shared spiritual relationship together. After all, I was in seminary. Apparently Erin is not the only woman to live with disappointments regarding dreams of a spiritually intimate marriage.

When to Settle. When Steve and I started dating, one of my close friends said she was worried that we'd end up getting married. 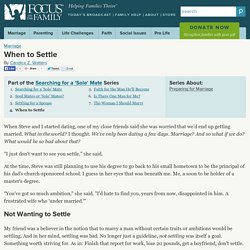 Green Means Go. If red flags are signs that a relationship should end, what are the signs that it should steam ahead? 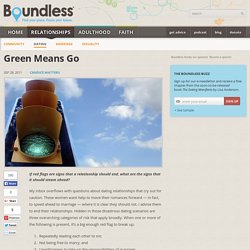 My inbox overflows with questions about dating relationships that cry out for caution. These women want help to move their romances forward — in fact, to speed ahead to marriage — where it is clear they should not. I advise them to end their relationships. Hidden in those disastrous dating scenarios are three overarching categories of risk that apply broadly.

When one or more of the following is present, it’s a big enough red flag to break up: Repeatedly leading each other to sin; Not being free to marry; and Unwillingness to take on the responsibilities of marriage. Having spent so much time in that and other columns answering questions from readers in troubled relationships, it’s no wonder I’m always on the look out for red flags. As I wrote about red flags, I thought about couples who seemed to be racing ahead, even though their struggles warned of major trouble. 1. 2. 3. 4. 5. Should You Get Engaged? Before you pop the question, you might want to ask yourself these five questions. 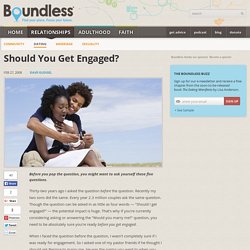 Thirty-two years ago I asked the question before the question. Recently my two sons did the same. Every year 2.3 million couples ask the same question. Though the question can be asked in as little as four words — "Should I get engaged? " Pre-Engagement Counseling. Focus on the Family recommends that couples who are dating seriously seek counseling before they get engaged. 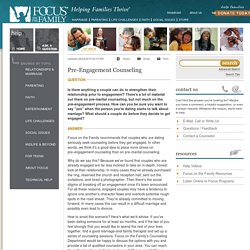 In other words, we think it's a good idea to place more stress on pre-engagement counseling than on pre-marital counseling. Why do we say this? Because we've found that couples who are already engaged are far less inclined to take an in-depth, honest look at their relationship. In many cases they've already purchased the ring, reserved the church and reception hall, sent out the invitations, and hired a photographer. Then there's the social stigma of breaking off an engagement once it's been announced. How to avoid this scenario? The counseling process should include a personality test such as the PREPARE/ENRICH Premarital Inventory.

Clearly, you'll need to invest a certain amount of time and money in the process. Copyright © 2010, Focus on the Family. Related Video Dr. Practical Advice for Those Getting Ready to Wed (Part 1 of 2) Jim: Let me say to both of you, welcome back to the microphone. 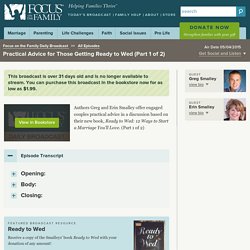 Greg: It's always good to be here. Thank you. Erin Smalley: Yep, thanks for havin' us. Jim: It is great to see what you're doing. You know, Greg, for those that don't know the story, you came in to Focus on the Family a few years ago and I really felt that it would be good for somebody coming into Focus to be thinking marriage every day and you have done that and you've done a great job at that and you've brought together strategically, the thinking that we needed in terms of family formation, what we're gonna talk about today, along with kind of the steady diet of keeping your marriage in a good place, which is the broadcast and all the other tools we have, as well as, intervention through the National Institute of Marriage, which your father and you started-- Greg: Yeah. 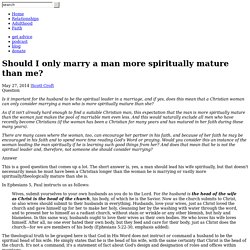 As if it isn't already hard enough to find a suitable Christian man, this expectation that the man is more spiritually mature than the woman just makes the pool of marriable men even less. And this would naturally exclude all men who have recently become Christians (if the woman has been a Christian for many years and has matured in her faith during these many years). There are many cases where the woman, too, can encourage her partner in his faith, and because of her faith he may be encouraged in his faith and to spend more time reading God's Word or praying. Would you consider this an instance of the woman leading the man spiritually if he is learning such good things from her?