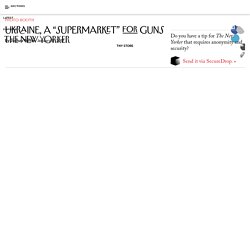 In the course of its post-Soviet history, it has been the only country in Europe without legislation governing the civilian possession of firearms. More than a dozen laws have been proposed, but none have been passed by parliament. Instead, Ukrainian gun ownership is regulated by ordinances overseen by the interior ministry. Officially, the only legal way to own a firearm in Ukraine today is to acquire a rifle for hunting or sporting purposes; handguns are banned, available only to security guards and certain categories of state officials.

Theatre -youth- war- UKRAINE. Samuel Bregolin - CUBA - AMERIQUE LATINE. China's Yellow River -CHINE. The power of humans is nothing compared to the power of nature, even when we try to change it. 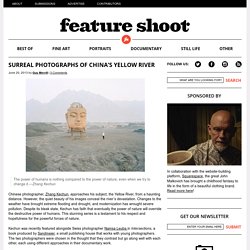 —Zhang Kechun Chinese photographer, Zhang Kechun, approaches his subject, the Yellow River, from a haunting distance. However, the quiet beauty of his images conceal the river’s devastation. Changes to the weather have brought extreme flooding and drought, and modernization has wrought severe pollution. Despite its bleak state, Kechun has faith that eventually the power of nature will override the destructive power of humans. 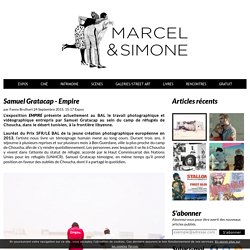 Magnum Photos. Intimate Pictures Show Cuba Through the Eyes of Its Youth. Last week, just a few days before Cuban leader Fidel Castro's death, I sat in a room in Old Havana with National Geographic photographer David Guttenfelder, photo editor Sadie Quarrier, and 21 Cuban students and young professionals, brainstorming ideas about what it means to be Cuban at this turning point in the country’s history. 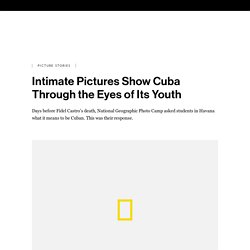 The session was part of a weeklong National Geographic Photo Camp being held in the city. Our goal: to teach Cuban youth how to tell their own stories through photography, to challenge them to show us their world in a way no one looking in from the outside can. We found a passionate group of students, a new generation on the brink of change and uncertainty who were anxious to create a body of work that would convey their challenges, hopes, and dreams. Here’s what they had to say—in images and in words. French politics EUROPE ECOLOGIE LES VERTS ILLUSTRATIONS - Images. Cartel Collective. Hunting with dogs - Pascal Montagne, Auteur photographe. Air France Magazine 236 - Décembre 2016 : Un numéro pour bien terminer l’année. TerraProject - POLITIQUE. 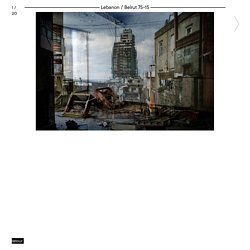 It is a desperate syncretism, at once beautiful and monstrous. I have rarely seen a city strike so violently its inhabitants. The war is still so close, though a thick layer of dust has covered everything, like a veil shielding innocence. The Lebanese love and hate their country. They agonize, believing that everything will always be lost. Beirut 75-15 is composed of three years of photographs taken whilst I wander in the city, juxtaposed with archive images found in the rubble of an old luxury hotel in the city center. The Russian Debutante Ball in London.

A mainstay of the society calendar, the debutante ball is traditionally where upper-class young ladies, escorted by eligible bachelors, are presented to society. 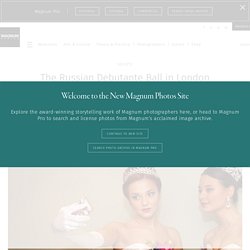 Although the debutante ball, with hundreds of years of tradition behind it, has never fully disappeared in Western culture, it has experienced something of a revival in recent years, with the young people taking part citing its tradition and strict etiquette as its attraction. Now in its fourth year, the Russian Debutante Ball in London took place on November 19, 2016 in the opulent ballroom setting of The Great Room at Mayfair’s Grosvenor House.

For Magnum president Martin Parr, the evening was an opportune moment to continue his study of society balls, which has seen him producing a book on the Vienna ball circuit. Reflecting on the event, he said, “I liked the Russian ball, and although it was quite similar to the many balls I have shot before, it was good to see the debs and the assorted Russian aristocracy.” Marriages_02: Deprived of Adolescence: Photo Stories: Daro Sulakauri Photojournalist. MATTHEW HAMON, Gymnosophy. Les Valaques - FRANCK VOGEL. Indiphoto. Daesung Lee, Sur les rives de Ghoramara, Sur les rives de Ghoramara. 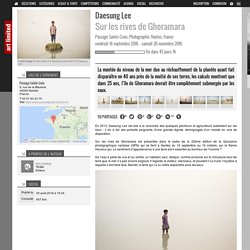 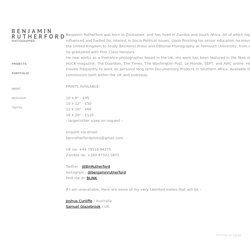 All of which highly influenced and fuelled his interest in Socio Political issues. Upon finishing his senior education he moved to the United Kingdom to Study BA(Hons) Press and Editorial Photography at Falmouth University, from which he graduated with First Class Honours. He now works as a freelance photographer based in the UK. His work has been featured in the likes of HUCK magazine, The Guardian, The Times, The Washington Post, Le Monde, SEPT, and AIAC online.

SALLY GALL - The Sly Eroticism of Laundry on the Line. Sally Gall’s photographs of laundry flapping on a line—which are the subject of a new show, “Aerial,” at the Julie Saul Gallery, in Chelsea—transform a domestic chore into a celebration of color and abstract form. 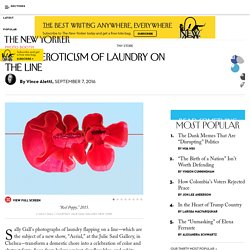 Seen from below against cloudless blue-and-white skies, garments billow and flow, becoming jellyfish, calla lilies, birds in flight. Michal Ronnen Safdie - A Separate Beach. The beach is a place for the body’s pleasure: on that much, everyone agrees. 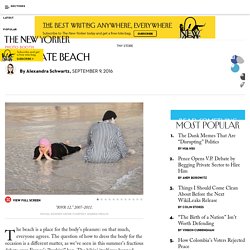 The question of how to dress the body for the occasion is a different matter, as we’ve seen in this summer’s fractious debate over France’s “burkini” ban. The bikini itself was banned from many French and European beaches when it first came on the market, in the nineteen-forties. The style of stretching two pieces of fabric tiny enough to be stuffed into a matchbox over the breasts and groin was a national scandal before it became a source of national pride.

Comissioned by Süddeutsche Zeitung, 2015 Kos has become a bottleneck of the global refugee stream from the Middle East to Europe. Two worlds collide when in the summer months of 2015 thousand of Syrians, Iraqis, Afghans and Pakistani are landing on the popular Greek holiday island while Germans, British and Swedes are relax in the sun, bath in the Mediterranean Sea and eat Gyros. Sans titre. This Is Not Your Family by Matt Eich. David Alan Harvey has photographed more than 40 articles for National Geographic, beginning with a story about Tangier Island, Virginia, in the November 1973 issue of the magazine. In 1978, Harvey was named Magazine Photographer of the Year by the National Press Photographers Association (NPPA). His work has been exhibited at the Corcoran Gallery of Art, the Nikon Gallery, the Museum of Modern Art in New York, and the Virginia Museum of Fine Arts. Magnum Photography Awards 2016.

David Alan Harvey has photographed more than 40 articles for National Geographic, beginning with a story about Tangier Island, Virginia, in the November 1973 issue of the magazine. In 1978, Harvey was named Magazine Photographer of the Year by the National Press Photographers Association (NPPA). His work has been exhibited at the Corcoran Gallery of Art, the Nikon Gallery, the Museum of Modern Art in New York, and the Virginia Museum of Fine Arts.

_DSC7818.jpg The Marian Year - Sliabh Bawn, Co Roscommon 357 © Paul Butler 27 Get your FREE guide How to Get the Most Out of Photography Competitions full of valuable tips and advice from photo industry professionals. Ian Brown Photography - Dignitas. Livre "Belle-Ile 1930-1960" Children of War. Children of War When I first entered the Iraqi Safe House for Creativity, an orphanage that shelters 33 orphans and displaced youth, I was compelled to document the stories of those taking refuge there. Two days later, I left with 33 stories that demonstrate the gravity of the situation in Iraq and its direct and indirect impact on thousands of children. I bore witness to their lives and the listened to the stories of the many crises they have been through. Iraq has been in varying states of chaos for the past two decades.

It started with international sanctions in the 1990s that hit the most vulnerable members of society the hardest. LA RUE OU RIEN. (Source : twitter.com) Ron Haviv. Ron Haviv is an award-winning photojournalist and conflict photographer who as documented international and civilian conflicts around the world since the Cold War. His work on Latin America, Africa, the Middle East, Russia and the Balkan concentrates not only on the direct effects of conflict but also upon the humanitarian consequences which are longer term and continue long after the gunfire has ceased.

His books Blood and Honey: A Balkan War Journal, and Afghanistan: On the Road to Kabul and the magazines he has published in including Fortune, The New York Times Magazine, TIME, Vanity Fair Paris, Match and Stern attest to the quality of his work in complex and fast-changing situations where intuition and self-preservation are as important as camera skills.