Talent Matching Platform – pymetrics. AI Recruitment. How Amazon Rebuilt Itself Around Artificial Intelligence. Machine Bias. On a spring afternoon in 2014, Brisha Borden was running late to pick up her god-sister from school when she spotted an unlocked kid’s blue Huffy bicycle and a silver Razor scooter. 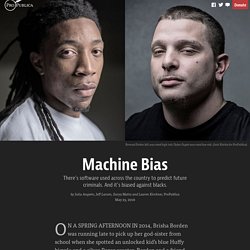 Borden and a friend grabbed the bike and scooter and tried to ride them down the street in the Fort Lauderdale suburb of Coral Springs. Just as the 18-year-old girls were realizing they were too big for the tiny conveyances — which belonged to a 6-year-old boy — a woman came running after them saying, “That’s my kid’s stuff.” Borden and her friend immediately dropped the bike and scooter and walked away. But it was too late — a neighbor who witnessed the heist had already called the police. Borden and her friend were arrested and charged with burglary and petty theft for the items, which were valued at a total of $80. Compare their crime with a similar one: The previous summer, 41-year-old Vernon Prater was picked up for shoplifting $86.35 worth of tools from a nearby Home Depot store.

Two Petty Theft Arrests. Amazon reportedly scraps internal AI recruiting tool that was biased against women. Bias in machine learning can be a problem even for companies with plenty of experience with AI, like Amazon. 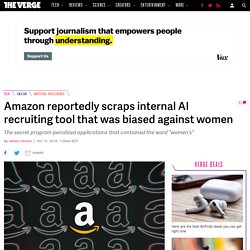 According to a report from Reuters, the e-commerce giant scrapped an internal project that was trying to use AI to vet job applications after the software consistently downgraded female candidates. Because AI systems learn to make decisions by looking at historical data they often perpetuate existing biases. In this case, that bias was the male-dominated working environment of the tech world. According to Reuters, Amazon’s program penalized applicants who attended all-women’s colleges, as well as any resumes that contained the word “women’s” (as might appear in the phrase “women’s chess club”). The team behind the project reportedly intended to speed up the hiring process. Speaking to The Verge, a source at Amazon said that the program had only ever been used in trials, and was never used independently or rolled out to larger groups.

The perfume makers that can't smell a thing. Artificial intelligence is quietly disrupting the fragrance development process. There is a revolution happening within fragrance. 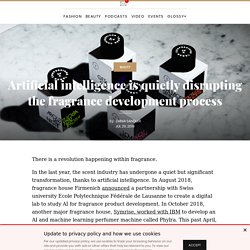 In the last year, the scent industry has undergone a quiet but significant transformation, thanks to artificial intelligence. In August 2018, fragrance house Firmenich announced a partnership with Swiss university Ecole Polytechnique Fédérale de Lausanne to create a digital lab to study AI for fragrance product development. In October 2018, another major fragrance house, Symrise, worked with IBM to develop an AI and machine learning perfumer machine called Phylra. This past April, fragrance company Givaudan launched an AI platform Carto to assist perfumers in scent creation. And finally, in July, fragrance subscription startup Scentbird launched a sub-brand called Confessions of a Rebel that used AI and customer data and reviews in the creation of its four debut fragrances. Historically, perfume creation has toed the line between art and science.

“Artificial intelligence is the next stage and great innovation in perfumery,” he said. Siri - Apple (UK) Tom Gruber: How AI can enhance our memory, work and social lives. Lumachain. Jamila Gordon: How AI can help shatter barriers to equality. AlterEgo: Interfacing with devices through silent speech. AlterEgo. AlterEgo is a non-invasive, wearable, peripheral neural interface that allows humans to converse in natural language with machines, artificial intelligence assistants, services, and other people without any voice—without opening their mouth, and without externally observable movements—simply by articulating words internally. 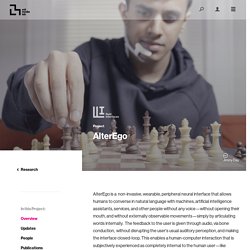 The feedback to the user is given through audio, via bone conduction, without disrupting the user's usual auditory perception, and making the interface closed-loop. This enables a human-computer interaction that is subjectively experienced as completely internal to the human user—like speaking to one's self. A primary focus of this project is to help support communication for people with speech disorders including conditions like ALS (amyotrophic lateral sclerosis) and MS (multiple sclerosis). The wearable system captures peri… View full description To date, the system has been demonstrated and tested with a small vocabulary of words or short sentences. Arnav Kapur: How AI could become an extension of your mind.