Men's health - BBC Good Food. How little money can a person live on? 26 April 2013Last updated at 06:23 ET By Duncan Walker & Keith Moore BBC News Magazine The debate over how much money benefits claimants should receive has run on for weeks. 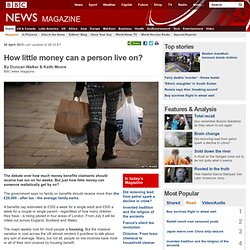 But just how little money can someone realistically get by on? The government says no family on benefits should receive more than the £26,000 - after tax - the average family earns. A benefits cap estimated at £350 a week for a single adult and £500 a week for a couple or single parent - regardless of how many children they have - is being piloted in four areas of London. From July it will be rolled out across England, Scotland and Wales. The major weekly cost for most people is housing. So, excluding housing costs, how much money does a person - for the sake of simplicity, single and living alone - need to get by? With careful planning, an adult could spend as little as £12 per week on a healthy, balanced diet, says Tom Sanders, a professor of nutrition at Kings College London.

Continue reading the main story. Asthma: Altering diet may ease symptoms. 6 January 2014Last updated at 02:44 ET By James Gallagher Health and science reporter, BBC News Fruits, vegetables and whole-grains might be an unlikely treatment for asthma according to animal studies. 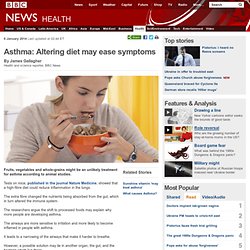 Tests on mice, published in the journal Nature Medicine, showed that a high-fibre diet could reduce inflammation in the lungs. The extra fibre changed the nutrients being absorbed from the gut, which in turn altered the immune system. BBC Food - Five ways to up your five a day. 18 March 2013Last updated at 09:41 By Hannah Briggs BBC Food One in five Brits consume at least five portions of fruit and vegetables daily, the highest intake in Europe. 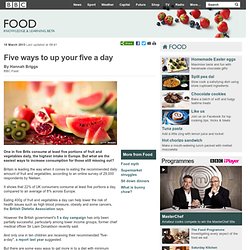 But what are the easiest ways to increase consumption for those still missing out? Britain is leading the way when it comes to eating the recommended daily amount of fruit and vegetables, according to an online survey of 29,000 respondents by Nielsen. It shows that 22% of UK consumers consume at least five portions a day, compared to an average of 8% across Europe. Eating 400g of fruit and vegetables a day can help lower the risk of health issues such as high blood pressure, obesity and some cancers, the British Dietetic Association says. Seven-a-day: Michael Mosley's guide to reaching the target. 2 April 2014Last updated at 09:04 ET. 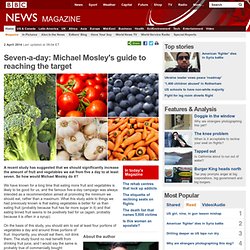 Who, Why, What: Can foods have negative calories? 15 March 2013Last updated at 16:08 ET By Kate Dailey BBC News Magazine Dieters looking for a quick fix may turn to the promise of negative-calorie foods. 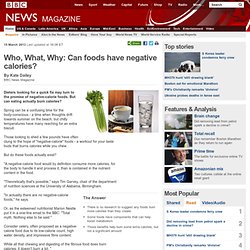 Your daily nutritional requirements. Food labelling: What does it say on the tin? 7 July 2011Last updated at 11:51 By Denise Winterman BBC News Magazine The complicated job of reading food labels is set to get easier thanks to a groundbreaking EU deal, but what are the key things that campaigners want people to look out for? 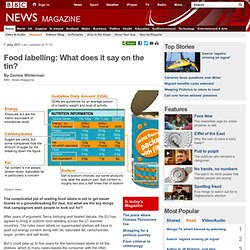 After years of argument, fierce lobbying and heated debate, the EU has agreed to bring in uniform food labelling across the 27 member countries. The rules mean labels on supermarket shelves will have to spell out energy content along with fat, saturated fat, carbohydrate, sugar, protein and salt levels. But it could take up to five years for the harmonised labels to hit the shelves, which in many cases leaves the consumer with the often puzzling "big four" - energy, protein, carbohydrate and fat. What they actually tell us is open to debate. Big meals in 'memory loss link' in elderly. 12 February 2012Last updated at 23:53 Researchers have identified an association between a high calorie diet and memory loss. 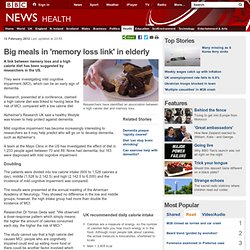 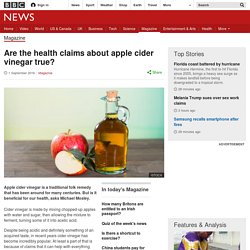 But is it beneficial for our health, asks Michael Mosley. Cider vinegar is made by mixing chopped-up apples with water and sugar, then allowing the mixture to ferment, turning some of it into acetic acid. Despite being acidic and definitely something of an acquired taste, in recent years cider vinegar has become incredibly popular. Are spices good for your health?

26 December 2012Last updated at 01:16 By Hannah Briggs BBC Food Spices have been revered for their health benefits throughout history. 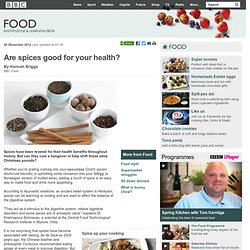 But can they cure a hangover or help shift those extra Christmas pounds? Whether you're grating nutmeg into your speculaas (Dutch spiced shortcrust biscuits) or sprinkling some cinnamon into your Glögg (a Norwegian version of mulled wine), adding a touch of spice is an easy way to make food and drink more appetising. According to Ayurvedic medicine, an ancient belief system in Hinduism, spices can be warming or cooling and are used to affect the balance of the digestive system. What is the food that can really improve your eyesight? Many people suffer declining eyesight as they get older, but is there something we can eat to improve it, asks Michael Mosley. 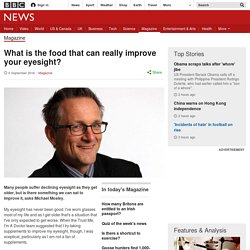 My eyesight has never been good. I've worn glasses most of my life and as I get older that's a situation that I've only expected to get worse. When the Trust Me, I'm A Doctor team suggested that I try taking supplements to improve my eyesight, though, I was sceptical, particularly as I am not a fan of supplements. Which foods can improve your gut bacteria? Can what you eat change the bacteria in your gut for the better? Dr Michael Mosley has been finding out which foods and drinks can make the most difference. The gut microbiome - the diverse community of bacteria that inhabits our intestines - is a hot topic in science right now. Almost every day we come across headlines claiming that it has the power to influence our health in new and surprising ways, whether it's our weight, our mood or our ability to resist infection.

Unsurprisingly, given this explosion of interest in our inner ecosystem, our supermarket shelves and pharmacies now stock an array of probiotic products - products containing live bacteria and yeasts - that claim to be able to influence our gut microbiome for the better. How quickly can you improve your gut bacteria? Could turmeric really boost your health? Image copyright iStock Bold health claims have been made for the power of turmeric. Is there anything in them, asks Michael Mosley. Turmeric is a spice which in its raw form looks a bit like ginger root, but when it's ground down you get a distinctive yellowy orange powder that's very popular in South Asian cuisine.

Until recently the place you would most likely encounter turmeric would be in chicken tikka masala, one of Britain's most popular dishes. These days, thanks to claims that it can improve everything from allergies to depression, it's become incredibly trendy, not just cooked and sprinkled on food but added to drinks like tea. Now I'm usually very cynical about such claims, but in the case of turmeric I thought there could be something to it. Thousands of scientific papers have been published looking at turmeric and curcumin in the laboratory - some with promising results.

Food allergy and intolerance self-diagnosis. 18 March 2012Last updated at 02:25 GMT By Sheila Dillon Presenter, Radio 4's Food Programme Peanuts can cause those allergic to them to go in to shock The number of people who believe they have a food allergy or intolerance has risen dramatically in the past few years, experts say, with up to 20% of the population now believing they are affected in some way - but how many really have a medical condition? Hairdresser Jane Delaney, who is 21, believes she is one of the thousands of people with a food intolerance. Dieticians say extra protein can do more harm than good. By Rick Kelsey Newsbeat reporter There is a warning that gym supplements are often doing more harm than good to people using them. The British Dietetic Association (BDA) says high levels of additional protein can cause side-effects, which can include nausea as well as kidney and liver damage.

It wants clearer warnings about what is in the powders and tablets. Manufacturers say consumers are well protected with only 11 reported reactions in 11 years. Jane Griffin is a former British Olympic dietician and speaks for the BDA. "The more protein in your diet the more you have to get rid of," she said. What caused the obesity crisis in the West? Does drinking fizz make you fat? Image copyright Getty Images We all know that sugary, fizzy drinks are full of calories - with the equivalent of about seven teaspoons of sugar in a standard can of cola. But is it only the sugar in the drink that swells our waists, or could it also be the bubbles? 10 Amazing Ways To Stop Overeating. Have the Danes cracked childhood obesity? Childhood obesity has become a global epidemic, but it is not easy to treat. Why brown fat is 'good' in the fight against obesity. In search of a personalised diet. Tip your protein balance to curb hunger pangs.

Meat lovers, rejoice. The long-held notion that protein-rich diets are more filling appears to be true, which means that hitting the right balance between protein, carbohydrates and fat can curb overeating. Researchers from the University of Sydney, Australia, tested three diets on 22 male and female participants. All three diets were made up of the same meals and optional snacks, but modified to contain 10, 15 or 25 per cent protein. Each subject spent four days on each one. Seaweed could be key to weight loss, study suggests. Why beige carbs are the ones to avoid. Is reheated pasta less fattening? Many food-lovers worry about pasta making them fat. Eat rice cold for fewer calories. Calories busted by cafe culture.

The Sugar Conspiracy. When is it safe to reheat leftovers? Should I worry about arsenic in my rice? How to use your freezer better. Frozen food safety confusion causing waste, warns FSA. Five expired foods you can still eat. Is MSG Actually Bad for You? The power of intermittent fasting. Intermittent fasting: Trying it out for science. Intermittent fasting: Enduring the hunger pangs. Intermittent fasting: The good things it did to my body. When you eat beats what you eat in staying healthy - health - 18 May 2012. Can changing your mealtimes make you healthier? Skipping breakfast primes the brain to seek out fat. Could leaving 12 hours between dinner and breakfast benefit health. Calorie Needs Against Consumption. The Renzo Gracie Diet. Nutrition's Ultimate Guinea Pig: The Middle-Aged Athlete. George Lockhart - Managing Diets for Rory, Easton, Assuncao. Mike Dolce: Belfort Kicks 'Bodybuilder' Diet to Curb. The Iceman Grubeth. How To Eat Like a UFC Hall of Famer.