Weight Conversion Chart Stones To Kilograms - Full Conversion Tables For 16st - 24st. Fat women who refuse to diet 'are more likely to get cancer' Melina Arnold, of the International Agency for Cancer Research in Lyon, said it is important women are aware cancer may be fuelled by obesity. 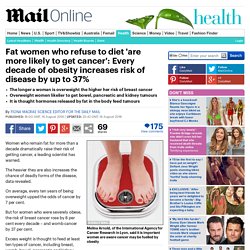 Cut carbs, quit sugar, feel fabulous, says Karen Thomson. Acamdemics believe regardless of our weight, we should all be eating MORE fat, not less, and cutting back severely on carbohydrates — particularly sugar Eating healthily all the time can be a big challenge. 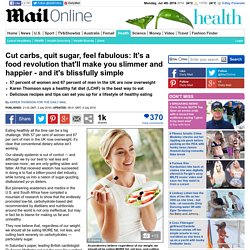 With 57 per cent of women and 67 per cent of men in the UK now overweight, it’s clear that conventional dietary advice isn’t working. Our obesity epidemic is out of control — and although we try our best to ‘eat less and exercise more’, we are only getting sicker and fatter. All that received wisdom has succeeded in doing is to fuel a billion-pound diet industry, while turning us into a nation of sugar-guzzling, disillusioned yo-yo dieters. But pioneering academics and medics in the U.S. and South Africa have compiled a mountain of research to show that the endlessly promoted low-fat, carbohydrate-based diet recommended by dietitians and nutritionists around the world is not only ineffectual, but may in fact be to blame for making us fat and unhealthy. How big should your portions be? FEMAIL reveals the serving sizes of common foods. 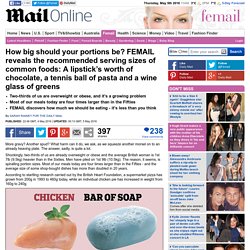 Another spud? What harm can it do, we ask, as we squeeze another morsel on to an already heaving plate. Nutracheck experts reveal ideal portion sizes for dieters. For decades, diet gurus have advised slimmers to simply 'eat less' but while that mantra seems easy, it turns out that it's harder than it sounds. 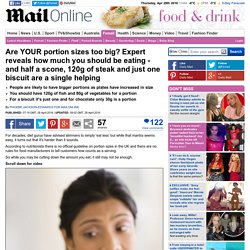 According to nutritionists there is no official guideline on portion sizes in the UK and there are no rules for food manufacturers to tell customers how counts as a serving. So while you may be cutting down the amount you eat, it still may not be enough. Scroll down for video Most people are unsure how much one portion of food should be and may be overeating even healthy foods like vegetables as well as cake However, Emma Brown, a nutritionist for the website Nutracheck, says that broadly one portion counts as 120g of steak, one biscuit and just half a scone. Healthy zero-carb Cloud Bread made from four ingredients is unveiled. Now you really can have carbs before Marbs thanks to a new foodie invention. 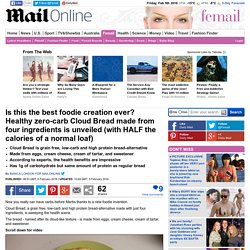 Cloud Bread, a grain free, low-carb and high protein bread-alternative made with just four ingredients, is sweeping the health scene. Exercise only works up to a point 'before the body adjusts and calorie burn plateaus' Diet and calorie counting not exercise is key if a person is waht Diet not exercise is the key to losing weight, a new study has concluded. 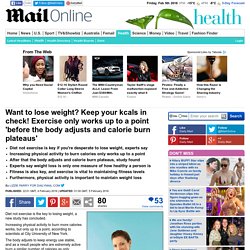 Increasing physical activity to burn more calories works, but only up to a point, according to scientists at City University of New York. Desperate to shed pounds? Try Diet by NUMBERS! Weight-loss doctor reveals her top 10 rules to shed poundsSimple steps include eating five portions of fruit and vegetables a dayAim to take at least 10,000 steps each day, and seven hours sleep a night By Dr Sally Norton For Dailymail.com Published: 17:05 GMT, 20 November 2015 | Updated: 19:56 GMT, 20 November 2015 Eating fat is bad for you. 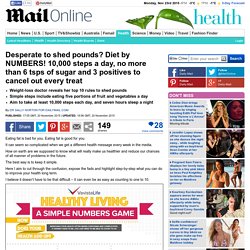 Eating fat is good for you. It can seem so complicated when we get a different health message every week in the media. The best diet to slash heart disease risk is nuts, soy and leafy vegetables. The best healthy diet yet has been devised by scientists to reduce the risk of heart disease. 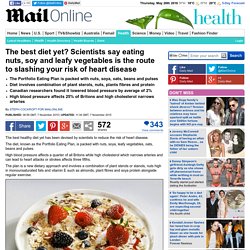 5:2 Diet. Slim Fast. A LOT of weight to lose? Then join the WeMITTS. MiniMins.com - Weight Loss Support Forum. BMI calculator. Stay slim FOR EVER with the mindfulness diet: It's the proven way to train your brain to resist cravings and unhealthy food, and its blissfully easy to follow. Eating without thinking allows us to consume thousands of caloriesWith so much convenience food all around us, the temptation is constantPracticing mindfulness will teach you to eat healthily without any effortMindfulness is easy to learn, and it gets better and easier with practise. 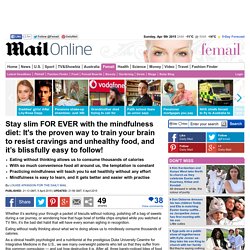 Can The Train Trip hypnotherapy app brainwash you into losing weight? App aims to change the way you think about food Uses hypnotic 'journeys' to challenge behaviours around eatingDeveloped by former personal trainer and clinical hypnotherapistRacing up the health & fitness app charts as people try and lose weight. 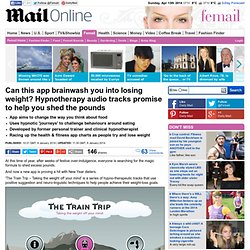 Calories in Food. Calories in Milk/Yogurt. One cup of whole milk contains 150 calories. One cup of skimmed milk contains 85 calories. One tablespoon of heavy whipping cream contains 36 calories, while one cup of regular full fat milk yogurt contains 150 calories. For specific details of the calorie and energy content of different types of dairy foods, click below. Free Diet Plans at SparkPeople. How to Determine Your Calorie Needs. Determining your body’s total dietary energy needs takes a bit of math — so grab a calculator. This method of determining your calorie needs is easier and almost as accurate as checking into a research lab and submitting yourself to scientific scrutiny by a white-coated nerd with a clipboard and a stopwatch.

Estimate your basic energy needs.Multiply your current weight (in pounds) by 10 if you’re a woman or 11 if you’re a man. Could a fry-up be good for you? Scientists discover that eating a big breakfast prevents diabetes and high blood pressure. People who eat a big breakfast have lower levels of insulin and glucoseThis reduces risk of heart disease, diabetes, hypertension, high cholesterolThey are also less likely to snack during the day - this reduces obesity risk By Daily Mail Reporter Published: 12:23 GMT, 6 August 2013 | Updated: 00:47 GMT, 7 August 2013. Losing weight not only makes you healthier, it can also boost your MEMORY. Obese people have impaired episodic memory - the memory of the events that happen throughout lifeOlder, overweight women who lose weight through dieting can change the brain regions used for memoryThis improves episodic memory proving that obesity-related memory impairment is reversible By Emma Innes Published: 16:16 GMT, 18 June 2013 | Updated: 16:17 GMT, 18 June 2013 Shedding the pounds not only makes you healthier, it also improves your memory, research has revealed.

Previous studies have shown that obese people have impaired episodic memory - the memory of events throughout life. But scientists say older, overweight women who lose weight through dieting actually change the regions of the brain important for memory. A large lunch and a small dinner really IS the key to keeping trim. Body’s ability to make use of the sugar in food fluctuates throughout the dayWorks in tune with body clock, so if this is disrupted, can cause weight gainEvening meal should be light and post-dinner snacks avoided By Fiona Macrae Science Correspondent Published: 18:01 GMT, 21 February 2013 | Updated: 18:06 GMT, 21 February 2013 Due to the way the body uses sugar, lunch should be the biggest meal of the day. Everything you think you know about healthy eating is wrong! Diet tips: Cut out 300 calories for good or you'll pile the pounds straight back on.

Yes, you CAN think yourself thinner... Weight Loss - Diet Ticker. This weight loss ruler can track your weight loss towards your goal. Display your progress in pounds or kilograms. Blog to Lose - No matter the plan... we all Blog to Lose! How an obese disabled man lost 140lbs in TEN months and ran again - thanks to yoga. The Pitter Patter of Losing Pounds. My Journey of 100 Pounds. So this week was awesome. I just love the No-S program. It's teaching me moderation....and it's easy! We've continued to eat at home all week. The power of intermittent fasting. Scientists are uncovering evidence that short periods of fasting, if properly controlled, could achieve a number of health benefits, as well as potentially helping the overweight, as Michael Mosley discovered.

Fasting can help protect against brain diseases, scientists say. Fasting for regular periods could help protect the brain against degenerative illnesses, according to US scientists. Researchers at the National Institute on Ageing in Baltimore said they had found evidence which shows that periods of stopping virtually all food intake for one or two days a week could protect the brain against some of the worst effects of Alzheimer's, Parkinson's and other ailments. Can fasting for two days each week stop dementia? It sounds far-fetched, but scientists think slashing calories may combat a host of illnesses.