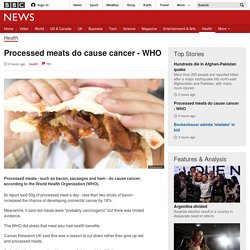 Its report said 50g of processed meat a day - less than two slices of bacon - increased the chance of developing colorectal cancer by 18%. Meanwhile, it said red meats were "probably carcinogenic" but there was limited evidence. The WHO did stress that meat also had health benefits. Cancer Research UK said this was a reason to cut down rather than give up red and processed meats. And added that an occasional bacon sandwich would do little harm. What is processed meat? Processed meat has been modified to either extend its shelf life or change the taste and the main methods are smoking, curing, or adding salt or preservatives. Simply putting beef through a mincer does not mean the resulting mince is "processed" unless it is modified further.

Has anyone you know ever actually gotten sick from eating raw cookie dough? [moved from Home Cooking] - General Topics. That link mentions that high sugar levels in general prevent bacteria in general from growing. 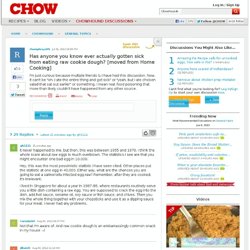 It makes no mention of sugar's effect on salmonella specifically, makes no mention of how high the sugar level must be to stop bacterial reproduction, and makes no mention of the effect of sugar on a preexisting bacterial presence that already has the critical number of bacteria needed to cause infection. Not all bacteria respond the same way to the same conditions. Frankly, sugar is probably not the answer here. It may prevent some bacteria from growing, but it probably won't prevent an already dangerous bacterial load from causing illness. Worse, there are various documented cases of salmonella specifically surviving well in a fairly highly sugared environment - the peanut butter outbreak just a couple years is one example. Like many commonly held food 'no nos,' eating raw cookie dough doesn't strike me as highly dangerous.

Best Foods For Women in Their 20s. Calcium (and Vitamin D) for Bone-BuildingThe Problem: This is your last chance to strengthen your skeleton. 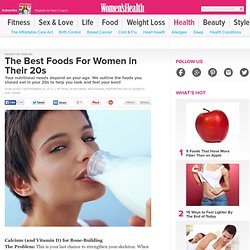 When you hit 30, you're pretty much stuck with what you've got. The Fix: Drink two eight-ounce glasses of vitamin D-fortified, low-fat milk every day. You'll get 581 milligrams of calcium and five micrograms of vitamin D, the perfect nutrient combo to develop break-resistant bones. Broccoli also deserves a place on your menu. It contains a respectable 43 milligrams of calcium per cup and is also home to magnesium, vitamin K, and phosphorus, all of which, research shows, play a major role in keeping you upright from here to Social Security.

Find naked broccoli unbearably boring? Microwave Meals for the Time-CrunchedThe Problem: Between jobs, boyfriends, working out, and trying to keep some measure of a social life, who has time to eat, let alone eat healthily? The Fix: Beef. The Fix: Eat a tablespoon of ground flaxseed every day. 3 Tropical Fruits That Can Cause Miscarriage. Tropical fruits are a delicious component of a healthy, balanced diet. 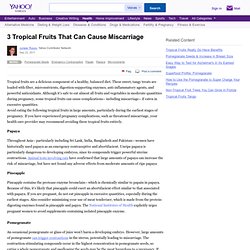 These sweet, tangy treats are loaded with fiber, micronutrients, digestion-supporting enzymes, anti-inflammatory agents, and powerful antioxidants. Although it's safe to eat almost all fruits and vegetables in moderate quantities during pregnancy, some tropical fruits can cause complications-- including miscarriage-- if eaten in excessive quantities. Avoid eating the following tropical fruits in large amounts, particularly during the earliest stages of pregnancy. Caffeine Content of Drinks. The nutrition label, or directly contacting the manufacturer. 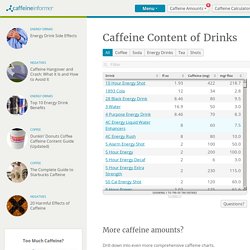 We also monitor lab tests published in peer-reviewed journals. Gluten Free Diet Tips for Celiac Disease Symptoms, Foods and Lifestyle. Approximately 5 million children in 2010 were diagnosed with ADHD according to the Centers for Disease Control. 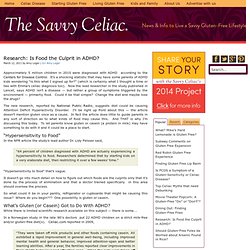 It’s a shocking statistic that may have some parents of ADHD kids wondering “is this what I signed up for?” (which is certainly what I thought a time or two with Emma’s celiac diagnosis too). Now the lead researcher in the study published in Lancet, says ADHD isn’t a disease — but rather a group of symptoms triggered by the environment — primarliy food. Could it be that simple? Change the diet and maybe lose the drugs? The new research, reported by National Public Radio, suggests diet could be causing Attention Deficit Hyperactivity Disorder.

Food%20for%20Thought%20Nutrition%20and%20ADHD%20050710. The Link Between Celiac Disease and ADHD. Gluten and ADHD - Can Celiac Disease or Gluten Intolerance Contribute to Attention Problems. When you have attention deficit hyperactivity disorder (ADHD), you often behave impulsively and are easily distracted, and you probably have difficulty concentrating and focusing on important tasks. 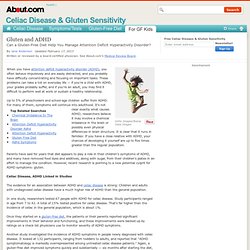 Earth Balance All Natural Spreads. Vegetarian Society of DC - Welcome to VSDC. Nutrition Diva : Is Carbonated Water Bad for You? Although I don’t drink much soda (or, as they call it where I grew up, “pop”), I do enjoy drinking sparkling, or carbonated, water and often recommend it as a healthful alternative to soda. 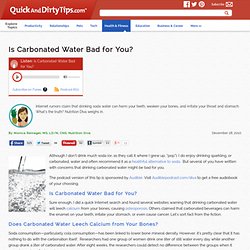 But several of you have written with concerns that drinking carbonated water might be bad for you. The podcast version of this tip is sponsored by Audible.