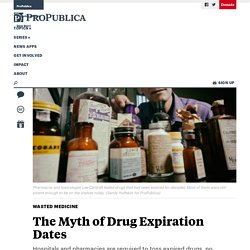 The box of prescription drugs had been forgotten in a back closet of a retail pharmacy for so long that some of the pills predated the 1969 moon landing. Most were 30 to 40 years past their expiration dates — possibly toxic, probably worthless. But to Lee Cantrell, who helps run the California Poison Control System, the cache was an opportunity to answer an enduring question about the actual shelf life of drugs: Could these drugs from the bell-bottom era still be potent? Cantrell called Roy Gerona, a University of California, San Francisco, researcher who specializes in analyzing chemicals. Grapefruit and pills mix warning. What if your gluten intolerance is all in your head?

Read full article Continue reading page |1|2|3 For many sufferers, gluten intolerance may originate in the mind, not the body. 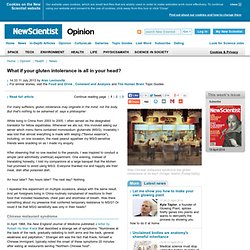 But that's nothing to be ashamed of, says a philosopher While living in China from 2003 to 2005, I often served as the designated translator for fellow expatriates. Being bilingual 'boosts brain power' 1 May 2012Last updated at 02:49 ET Differences were seen in the brainstem (coloured orange in this picture) Learning a second language can boost brain power, scientists believe. 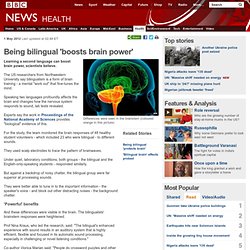 The US researchers from Northwestern University say bilingualism is a form of brain training - a mental "work out" that fine-tunes the mind. Why drugs often list headache as a side-effect. Sipping acidic fruit teas can wear away teeth, says study. Media playback is unsupported on your device. 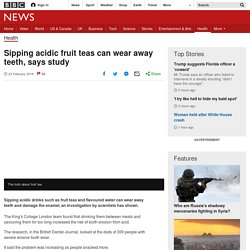 The science of a long life. How to live beyond 100. 2 July 2012Last updated at 05:51 ET By Lucy Wallis BBC News There are nearly 12,000 centenarians in Britain today, but with more people reaching 100 how do scientific theories about life expectancy compare with the experience of those who have received a telegram from the Queen? 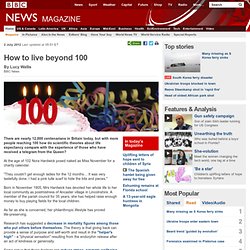 At the age of 102 Nora Hardwick posed naked as Miss November for a charity calendar. "They couldn't get enough ladies for the 12 months… It was very tastefully done. I had a pink tulle scarf to hide the bits and pieces. " Born in November 1905, Mrs Hardwick has devoted her whole life to her local community as postmistress of Ancaster village in Lincolnshire. Why I consumed my own blood. Human blood is an extraordinary substance that manages simultaneously to nourish, sustain protect and regenerate our bodies, but despite decades of research we are only just beginning to exploit its full potential. 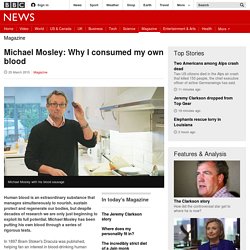 Michael Mosley has been putting his own blood through a series of rigorous tests. In 1897 Bram Stoker's Dracula was published, helping fan an interest in blood-drinking human vampires that has never gone away. In the novel, Count Dracula feeds on human blood and transforms himself from a little old man with white hair into a dark-haired super-athlete. Can meditation help prevent the effects of ageing? Can meditation really slow down the effects of age? 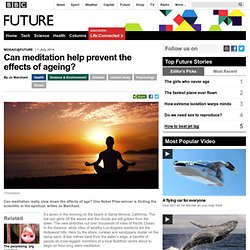 One Nobel Prize-winner is finding the scientific in the spiritual, writes Jo Marchant. It’s seven in the morning on the beach in Santa Monica, California. The low sun glints off the waves and the clouds are still golden from the dawn. The view stretches out over thousands of miles of Pacific Ocean. Meditation boosts genes that promote good health - health - 02 May 2013. Feeling run-down? 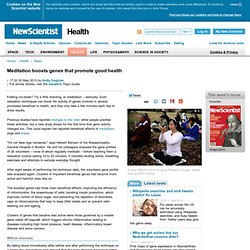 Try a little chanting, or meditation – seriously. Such relaxation techniques can boost the activity of genes involved in several processes beneficial to health, and they only take a few minutes each day to show results. Coffee addiction: Do people consume too much caffeine? 22 May 2013 Last updated at 20:58 ET By Jon Kelly BBC News Magazine, Washington DC US officials are investigating the safety of caffeine in snacks and energy drinks, worried about the "cumulative impact" of the stimulant - which is added to a growing number of products. How to optimize your caffeine intake. Two doctors at Penn State University have developed Caffeine Zone, a free iOS app that tells you the perfect time to take a coffee break to maintain an optimal amount of caffeine in your blood — and, perhaps more importantly, it also tells you when to stop drinking tea and coffee, so that caffeine doesn’t interrupt your sleep. 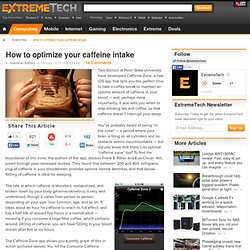 You’ve probably heard of being “in the zone” — a period where your brain is firing on all cylinders and no obstacle seems insurmountable — but did you know that there’s an optimal “caffeine zone” too? To find the boundaries of this zone, the authors of the app, doctors Frank E. BBC Food - How healthy is your coffee? 19 April 2013Last updated at 10:09 By Anna-Louise Taylor BBC Food Greek coffee could be good for the heart, one recent research study suggests. 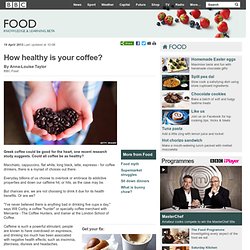 Could all coffee be as healthy? Macchiato, cappuccino, flat white, long black, latte, espresso - for coffee drinkers, there is a myriad of choices out there. Everyday billions of us choose to overlook or embrace its addictive properties and down our caffeine hit, or hits, as the case may be. But chances are, we are not choosing to drink it due for its health benefits. Caffeine energy drinks 'intensify heart contractions' 2 December 2013Last updated at 00:59 ET Energy drinks packed with caffeine can change the way the heart beats, researchers warn. The team from the University of Bonn in Germany imaged the hearts of 17 people an hour after they had an energy drink. The study showed contractions were more forceful after the drink.

The team told the annual meeting of the Radiological Society of North America that children and people with some health conditions should avoid the drinks. Birthweight link to lifelong health. 22 August 2011Last updated at 00:05. Children with older fathers and grandfathers 'live longer' 11 June 2012Last updated at 22:24 ET By Michelle Roberts Health editor, BBC News website. Older dads linked to rise in mental illness.

22 August 2012Last updated at 13:11 ET By Pallab Ghosh Science correspondent, BBC News Most mutations are linked to the father's age rather than the mother's, experts believe A genetic study has added to evidence that the increase in some mental and other disorders may be due to men having children later in life. Diet 'linked' to low sperm counts. Walnuts 'improve sperm health' 16 August 2012Last updated at 05:31 ET By Anna-Marie Lever Health reporter, BBC News. 'Exercise boosts men's sperm count' Making babies happy, healthy - and green. Can singing a lullaby ease a child's pain? 29 October 2013Last updated at 09:57 By James Gallagher Health and science reporter, BBC News.

Infants' brains attuned to baby talk and nursery rhymes. Antibiotics can make young children heavier, says study. 22 August 2012Last updated at 09:47 ET Does exposure to antibiotics affect healthy bacteria? Giving antibiotics to young babies may increase their weight later in life, according to US researchers. A study of 11,532 infants, published in the International Journal of Obesity, showed children under six months who were given antibiotics were heavier in later years. Researchers say the drugs could be affecting bacteria in the gut, leading to weight changes. The amazing significance of what a mother-to-be eats.