Intermittent fasting diet for fat loss, muscle gain and health: November 2011. Dr. Squat - Dr. Fred Hatfield. By Frederick C. Hatfield, Ph.D. Convention has it that there are three ways to lose weight: 1) dehydration, 2) fat loss, and 3) lean muscle weight loss. Fat loss is the ONLY acceptable route for you. Dehydration is never healthy or acceptable, and losing lean muscle is totally counter to everything that a healthy, fitness-oriented lifestyle stands for. According to the same conventional wisdom, fat loss can only be accomplished three ways: 1) with aerobic exercise, 2) through reduced caloric intake or 3) through a combination of the two.

Don’t tell me, “Why with heavy weight training!” Advanced Fat Loss Carb Cycling. Carb cycling works, the question is “why?”. I have successfully used it to drop from 9% to 7% bodyfat without a loss of any muscle mass. With carb cycling it appears you get the rapid fat loss of a low-carb diet and the ability to drop your bodyfat to a very low level without cannibalizing muscle mass or without the many other drawbacks associated with a low-carb diet.

Carb cycling is an advanced technique requiring true dedication, its not for the casual person trying to lose a few pounds. 100% Natural Bodybuilding & Fitness by Luimarco - Home. The Problem with Dieting. A recent study showed just how chronic dieting can turn someone into a food addict. 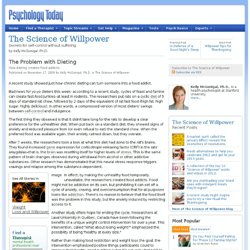 Bad news for yo-yo dieters this week: according to a recent study, cycles of feast and famine can create fast-food junkies–at least in rodents. The researchers put rats on a cyclic diet of 5 days of standard rat chow, followed by 2 days of the equivalent of rat fast food (high fat, high sugar, highly delicious). Webinar #1 About Diets & Psychology - Audio Only. Where Do Americans Get Their Calories? (Infographic) Recommended Version 7 Update 55 Select the file according to your operating system from the list below to get the latest Java for your computer. 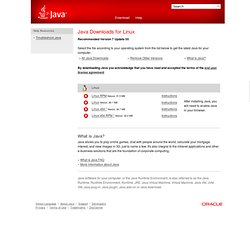 By downloading Java you acknowledge that you have read and accepted the terms of the end user license agreement <p><span class="termhighlight">In order to optimize your experience and provide you with accurate messages, please enable javascript in your browser for the duration of your Java installation. </span></p> What is Java? Java allows you to play online games, chat with people around the world, calculate your mortgage interest, and view images in 3D, just to name a few. The Progressive Increase of Food Waste in America and Its Environmental Impact. Food waste contributes to excess consumption of freshwater and fossil fuels which, along with methane and CO2 emissions from decomposing food, impacts global climate change. 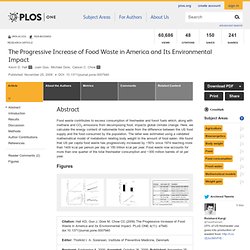 Here, we calculate the energy content of nationwide food waste from the difference between the US food supply and the food consumed by the population. The latter was estimated using a validated mathematical model of metabolism relating body weight to the amount of food eaten. We found that US per capita food waste has progressively increased by ~50% since 1974 reaching more than 1400 kcal per person per day or 150 trillion kcal per year.

Food waste now accounts for more than one quarter of the total freshwater consumption and ~300 million barrels of oil per year. Figures Citation: Hall KD, Guo J, Dore M, Chow CC (2009) The Progressive Increase of Food Waste in America and Its Environmental Impact. Editor: Thorkild I. Received: September 8, 2009; Accepted: October 26, 2009; Published: November 25, 2009 Introduction. Daily Calorie Intake Per Capita. What happens when you stop eating? Rise of hunger pt 2 « Weight loss, gallstones and the obesity crisis. If fat people need to eat less, and body fat is a source of fuel, why do fat people need to eat anything at all? 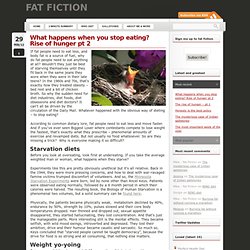 Wouldn’t they just be best of starving themselves until they fit back in the same jeans they wore when they were in their late teens? In the 1960s and 70s, that’s exactly how they treated obesity – bed rest and a bit of chicken broth. So why the sudden need for diet industries, diet foods, diet obsessions and diet doctors? Diet of a fat man: flour tortillas and beans « Weight loss, gallstones and the obesity crisis. Think of food and obesity and what do you picture? 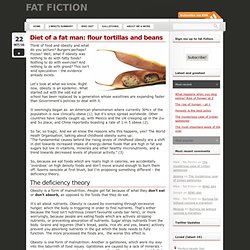 The Hunger Experiment. In 1945, several dozen American conscientious objectors volunteered to starve themselves under medical supervision. 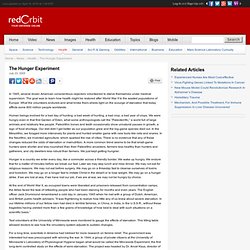 The goal was to learn how health might be restored after World War II to the wasted populations of Europe. The China Study: Fact or Fallacy? « Raw Food SOS: Troubleshooting on the Raw Food Diet. Disclaimer: This blog post covers only a fraction of what’s wrong with “The China Study.” 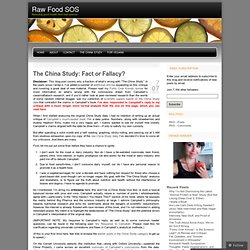 In the years since I wrote it, I’ve added a number of additional articles expanding on this critique and covering a great deal of new material. Please read my Forks Over Knives review for more information on what’s wrong with the conclusions drawn from Campbell’s casein/aflatoxin research, and if you’d rather look at peer-reviewed research than the words of some random internet blogger, see my collection of scientific papers based on the China Study data that contradict the claims in Campbell’s book. I’ve also responded to Campbell’s reply to my critique with a much longer, more formal analysis than the one on this page, which you can read here. “Forks Over Knives”: Is the Science Legit? (A Review and Critique) « Raw Food SOS: Troubleshooting on the Raw Food Diet. Welcome to my “Forks Over Knives” analysis, AKA the longest movie review you’ll ever attempt to read. 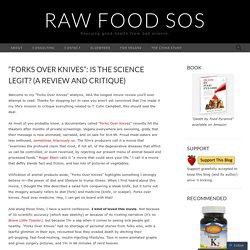 Thanks for stopping by! In case you aren’t yet convinced that I’ve made it my life’s mission to critique everything related to T. Colin Campbell, this should seal the deal. As most of you probably know, a documentary called “Forks Over Knives” recently hit the theaters after months of private screenings. Vegans everywhere are swooning, giddy that their message is now animated, narrated, and on sale for $14.99.

Related:  Where Do Americans Get Their Calories? (Infographic)   -  Education   -  Enterprise