Pearltrees Beta Launches on Wednesday: Will Let You Archive the. At this year's LeWeb conference, Pearltrees will launch the beta version of its bookmarking and curation service. 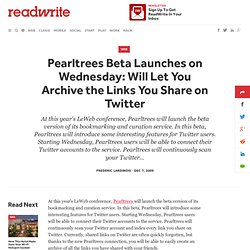 In this beta, Pearltrees will introduce some interesting features for Twitter users. Starting Wednesday, Pearltrees users will be able to connect their Twitter accounts to the service. Pearltrees will continuously scan your Twitter account and index every link you share on Twitter. Currently, shared links on Twitter are often quickly forgotten, but thanks to the new Pearltrees connection, you will be able to easily create an archive of all the links you have shared with your friends. Pearltrees: A Unique Way to Discover & Organize. « Zorap Creates Traveling Geeks Virtual Geek Pad for France Blogging Tour | Main | Orange Highlights at LeWeb #leweb » December 07, 2009 Pearltrees: A Unique Way to Discover & Organize on the Web Pearltrees CEO Patrice Lamothe meets us at the door of their offices on rue de charonne in a funky, artsy area of Paris that houses other early stage companies and ad agencies, not unlike San Francisco's SOMA in many ways. 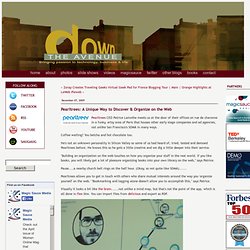 Coffee waiting? You betcha and hot chocolate too. He's not an unknown personality in Silicon Valley so some of us had heard of, tried, tested and demoed Pearltrees before. "Building an organization on the web touches on how you organize your stuff in the real world. Pause....a nearby church bell rings on the half hour. Pearltrees allows you to get in touch with others who share mutual interests around the way you 'organize yourself on the web.' Visually it looks a bit like the brain......not unlike a mind map, but that's not the point of the app, which is all done in flex btw. Pearltrees: Visual Collaborative Web Browsing Interface. I am with the Traveling Geeks at Pearltrees’ headquarter in Paris, I already published about Pearltrees a few months ago when it was in pre- alpha, but the public beta will launch in two days at LeWeb. 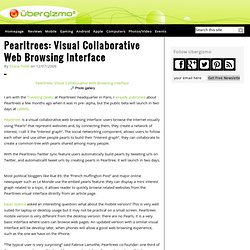 Pearltrees is a visual collaborative web browsing interface: users browse the internet visually using “Pearls” that represent websites and, by connecting them, they create a network of interest, I call it the “interest graph”. The social networking component, allows users to follow each other and use other people pearls to build their “interest graph”, they can collaborate to create a common tree with pearls shared among many people. With the Pearltress-Twitter sync feature users automatically build pearls by tweeting urls on Twitter, and automaticallt tweet urls by creating pearls in Pearltree, it will launch in two days. Pearltrees: A visual social bookmarking tool that has its own ta. If you’re the type of obsessive-compulsive person who needs to organize the firehose of information confronting you every day on the web, then Pearltrees might work for you. 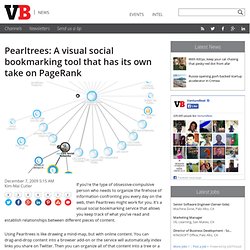 It’s a visual social bookmarking service that allows you keep track of what you’ve read and establish relationships between different pieces of content. Using Pearltrees is like drawing a mind-map, but with online content. You can drag-and-drop content into a browser add-on or the service will automatically index links you share on Twitter. Then you can organize all of that content into a tree or a web of keywords like the picture shown above. Pearltrees: Bookmarking Program for Organization Lovers  (This review is part of the Traveling Geeks tech tour of Paris. 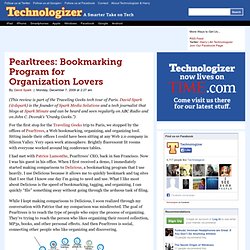 David Spark (@dspark) is the founder of Spark Media Solutions and a tech journalist that blogs at Spark Minute and can be heard and seen regularly on ABC Radio and on John C. Dvorak’s “Cranky Geeks.”) Visual social bookmarking: Innovative, but will it fly? Fresh off the plane, I’m on the road with the Travelling Geeks, and the first startup on our schedule is an innovative Paris-based social bookmarking operation, Pearl Trees. 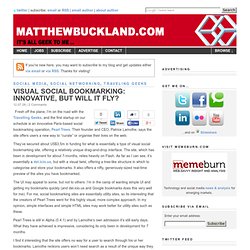 Their founder and CEO, Patrice Lamothe, says the site offers users a new way to “curate” or organise their lives on the web. They’ve secured about US$3,5m in funding for what is essentially a type of visual social bookmarking site, offering a relatively unique drag-and-drop interface. The site, which has been in development for about 7-months, relies heavily on Flash. As far as I can see, it’s essentially a del.icio.us, but with a visual twist, offering a tree-like structure in which to categorise and store your bookmarks. It also offers a nifty, generously-sized real-time preview of the sites you have bookmarked. The UI may appeal to some, but not to others. Pearl Trees is still in Alpha (0.4.1) and by Lamothe’s own admission it’s still early days. Pearl Trees is a good start, and I generally like their approach. 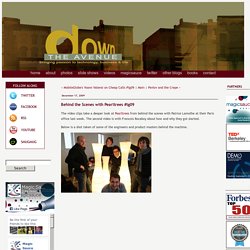 The second video is with Francois Rocaboy about how and why they got started. Below is a shot taken of some of the engineers and product masters behind the machine.