How Australia's massive bushfires are generating thunderstorms. Every decision counts. 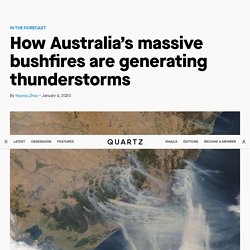 Big natural disasters can create their own weather systems. The Australian bushfires are now so intense that they’re starting to make thunderstorms. On Jan. 3, Australia’s meteorology bureau issued a severe thunderstorm warning for East Gippsland in Victoria. The thunderstorm condition is also happening in New South Wales, another state with intense fires and smoke. The bureau explained the formation of fire-generated thunderstorms on social media: Essentially, when hot air and smoke from bushfires rises and meets cool air from the atmosphere, it turns into pyrocumulus clouds, also known as “fire clouds.”

The thunderstorms can lead to two atmospheric events that could quickly damage a large area: downbursts and lightning. In the event of a downburst, the cooling wind can travel as fast as 170 miles per hour (270 km/h), knocking over fully grown trees. As global temperatures rise, pyrocumulus clouds may become more common. This is how most bushfires in Australia start, and how we know - Science News - ABC News. As fires continue to burn in different parts of Australia, investigators work to provide answers on the exact causes of devastating blazes. 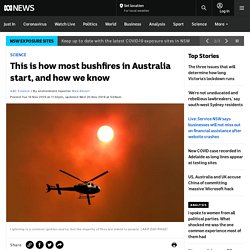 Last week we learnt that the Binna Burra fire, which destroyed the historic Binna Burra Lodge in South East Queensland, was started by a carelessly discarded cigarette. And the Gold Coast hinterland bushfires the week before may have been started by army live-firing exercises at the Kokoda Barracks, a spokesperson for the Australian Defence Force has conceded.

We know that hot, dry and windy weather increases the risk of fires starting, but here's what we know about what actually provides the spark. The nine categories of bushfire ignition Fire investigators have nine categories for the ignition sources of fires: Smoking: Smoking isn't as common a source of bushfire ignition as we might think. Australia bush fires create their own weather, including thunderstorms. Bushfire weather. Australia's fire weather seasons While bush fires can happen at any time of the year in Australia, the time of peak bushfire activity varies across the country with the changes in the seasonal weather patterns. 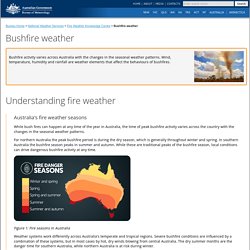 Thick plumes of smoke rise from bushfires at the coast of East Gippsland, Victoria, Australia January 4, 2020 in this aerial picture taken from AMSA Challenger jet. 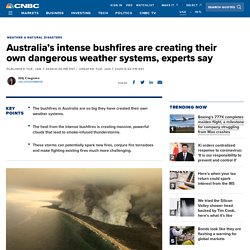 Mike Fromm, a meteorologist at the U.S. “They are a combination of a regular thunderstorm that everybody is very, very familiar with, but with the explosive heat source from the fire which actually makes them very peculiar,” Fromm said. Australia's Deadly Bushfires Are So Big They've Started Generating Their Own Weather. The Australia bushfires are generating "pyrocumulonimbus" clouds, which create their own thunderstorms that can start more fires.Here's how the process works, and why it's so dangerous.Visit Insider.com for more stories. 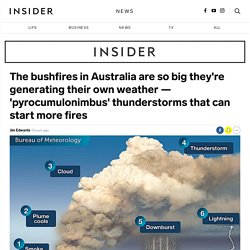 The bushfires in Australia are now so big that they are generating their own weather, in the form of giant thunderstorms that start more fires, according to the Bureau of Meteorology in Victoria.  "Pyro-cumulonimbus clouds have developed to altitudes over 16km in East #Gippsland this afternoon. These fire-induced storms can spread fires through lightning, lofting of embers and generation of severe wind outflows," the bureau tweeted on Monday.