Psychology is the study of human behaviour. In many of the cases, it is true that certain behaviours can end up unexplainable. However, on other occasions, we are able to refer to past scientific research or develop our own theories and come up with reasonings to explain certain human behaviours.

In this case, the bystander effect is widely known as a social psychological theory that states that individuals are less likely to lend a hand and offer help to the more vulnerable beings - needy and victims - who are in distress when there are more people around. From my secondary research, there are 2 main reasons as to why the bystander effect occurs, and 3 specific methods on how we can counteract and overcome it. 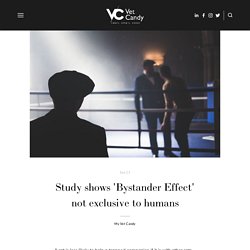 The study, titled "The Bystander Effect in Rats," also demonstrated that in the presence of other potential helper rats, rats are more, rather than less, likely to help. Whether helping is facilitated or suppressed depends on the circumstances rather than on personal temperament or morals, a finding with implications for human society. The research, published in the July 8 issue of Science Advances, builds off previous research on rat empathy. In 2011, Peggy Mason, PhD, professor of neurobiology and senior author of the study, and her UChicago team of researchers found that rats consistently freed trapped companions, even saving a bit of chocolate for them, and this behavior was driven by a rat version of empathy. Infamous 'Bystander Effect' Isn't Unique to Humans - New Study Shows Rats Do It, Too. When by itself, a rat immediately leaps to the aid of another in need. 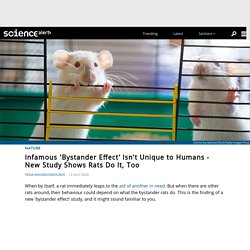 But when there are other rats around, their behaviour could depend on what the bystander rats do. This is the finding of a new 'bystander effect' study, and it might sound familiar to you. "We are constantly looking at others to see their reactions. And this is not a human thing. This is a mammalian thing," neurobiologist Peggy Mason from the University of Chicago told NPR. 1. Diffusion of responsibility (somebody else might help) 2. Pressure to conform (behaving in socially acceptable ways - when nobody helps, it seems like it's better to not help as well) Leaving the victim to fend for himself. Society becoming increasingly selfish and self-centred. Lacking the freedom to express oneself. Or worse, bystanders go the opposite. Pressure to conform (it's best I join in the bullying instead) Bystanders should stop taking photos and videos of accidents and victims - TODAYonline.

I refer to the news reports of the fatal traffic accident on Sunday (Dec 29) at Lucky Plaza.

I applaud the Good Samaritans who unselfishly helped to lift up the car, pulled the victims out and attended to them. These are acts of true heroism. They encourage us to lend help to accident victims when needed and show that there are still compassionate people who don’t respond to accidents by whipping out their phones first to take videos and photos to circulate to their friends.

In Sunday’s incident, one of the first things a bystander could do was to rush to the nearby Mount Elizabeth Hospital Accident and Emergency Department to seek help, as it would have the necessary medical equipment and trauma specialists on duty. This was crucial as the Singapore Civil Defence Force ambulances would take some time to arrive and the accident victims needed immediate medical attention and first aid.

But this cannot be at the expense of not rendering help to victims. Photo by Vivian - Rubbish truck caught on fire along Joo Seng Road (in this case, I am the bystander) Asians are more likely to display the bystander effect than their Western counterparts. 1. Upgrade one's hard & soft skill sets - Bystander effect: Training in skills makes people more willing to help, Letters in Print News. 2. Change of mindset - How to be kinder to strangers in Singapore, Opinion News.

The Charities Aid Foundation recently released the World Giving Index 2017, which provides insight into the scope and nature of giving around the world. Based on data collected from the Gallup World Poll, the index, which polled 1,000 individuals in each representative country, revealed two surprising facts. Myanmar, Indonesia and Kenya turned out to be among the most charitable countries, even though they have a huge number of their populations living below the poverty line. Being poor does not stop one from being generous.

Wealthy countries such as the United States, Canada, New Zealand, Australia and the United Arab Emirates also feature in the top 10. Myanmar, the top country for four years in a row, has a poor human rights record, in part because of its treatment of the Rohingya Muslims. Singapore, ranked 30, is behind Indonesia (2), Myanmar (1) and Thailand (15), but streets ahead of Cambodia (134), Vietnam (116) and the Philippines (54) in Asean. Changing our mindset. 3. Implementation of law - Bystanders should stop taking photos and videos of accidents and victims - TODAYonline.