We'll identify the causes of bystander effect and ways to intervene it.
Let's not be a bystander, whether it's physical or digital one. The classic case of bystander effect: murder of "Kitty" Genovese. Catherine “Kitty” Genovese was a 28-year-old woman who was brutally murdered outside of her Queens apartment in New York City on March 13, 1964. 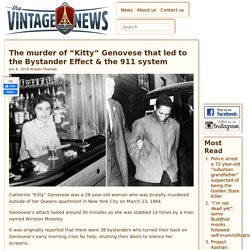 Genovese’s attack lasted around 30 minutes as she was stabbed 14 times by a man named Winston Moseley. It was originally reported that there were 38 bystanders who turned their back on Genovese’s early morning cries for help, shutting their doors to silence her screams. An illustration of active bystanders : Raffles Place stabbing case - Nov 2014. A man who was stabbed repeatedly in last Friday's audacious armed robbery attempt in the heart of the Singapore business district was carrying nearly $800,000 in cash and cheques. This was revealed yesterday when a 38-year-old Indonesian man was charged via video link from Singapore General Hospital. Arun, who goes by a single name, is alleged to have robbed Mr Kang Tie Tie of his sling bag at about 1pm outside the Raffles Place MRT Station. According to court documents, Arun purportedly used a knife with a 12.5cm-long blade to stab Mr Kang's right waist, right hip and right upper waist.

The bag contained $158,380 in Singapore currency, the equivalent of $20,030 in Brunei money, and three cash cheques for a total of $607,368, among other things. News reports quoting a keysmith in the area said Mr Kang, who is believed to be Indonesian as well, had been a regular visitor to The Arcade, an office and retail building near the scene of the robbery, for a few years. An example of digital bystander effect. On Sept. 17, the life of a 16-year-old high schooler in Long Island ended tragically in a violent brawl outside a strip mall.

Khaseen Morris was told to show up outside the mall at a certain time by several others his age, after he was seen walking home the girlfriend of another boy. Morris showed up and was immediately attacked by a group of five teenagers. The evolution of bystander effect in the digital world. When one thinks of the bystander effect, the story of Kitty Genovese usually comes to mind—the 1964 murder of a 28-year-old woman whose cries for help were heard by over 37 people, none of whom called the police. 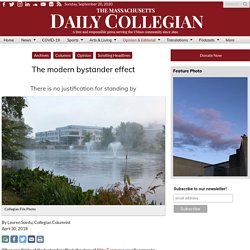 There was a psychological effect influencing the witnesses because, due to the fact that other people were around, their individual help was not needed. “I didn’t want to get involved,” reasoned one witness to the crime. Bibb Latané and John Darley, the psychologists who helped initially define the bystander effect, attributed its cause to one’s belief that inaction of others must mean that there isn’t an emergency, and therefore placing the responsibility to call for help on the other individuals in the group.

A) Diffusion of responsibility - the feeling of having less responsibility when more bystanders are present. B) Pluralistic ignorance - the belief that the situation is actually not an emergency because no one else is helping. C) Evaluation apprehension - the fear of unfavorable public judgment when helping. D) Ambiguous situation - the confusion of what's actually happening. E) Perceived cost - the likelihood of helping decreases when the perceived cost to ourselves increases. Social media - the eagerness of sharing the "first-hand" news with your friends and the world. 1) Create public awareness of bystander effect! 2) If you are the victim, ask someone specifically for the desired assistance! Remember bystander effect is caused by diffusion of responsibility and ambiguous situation.

3) Learn how to apply bystander intervention: Notice, interpret and assume responsibility. Teaching bystanders to intervene. Bystander intervention works in cyberbullying cases too. “Someone made an Instagram account that said: “You’re a slut and you should kill yourself.” And I was the only person they followed.” In 2016, social media and mobile apps have made it simple, cost-effective, and fun to connect with anyone, anywhere.

It’s hard to find someone who doesn’t have a Facebook, Twitter, or Instagram account. Although the popularity of online communication has brought us new ways to interact with others, it’s also showed us the dark side of human behavior. Online bullying is just one example of how conversations on social media can go wrong. You’re probably familiar with the term “cyberbullying”, and you probably have a good sense of how serious it can be for victims.

Bystanders in the Age of Cyberbullying We probably all believe that it’s important to stop bullying. While the Internet makes communication easier, it doesn’t necessarily make bystander intervention more likely. There are other ways that online communication makes aggression harder to stop. 4) Learn first-aid: Research has shown that first-aid training could lead to bystanders providing more immediate and adequate first aid at emergencies. INTRODUCTION:Traffic crashes constitute a major, worldwide public-health problem that cause disabilities, life-long suffering, and huge economic losses. 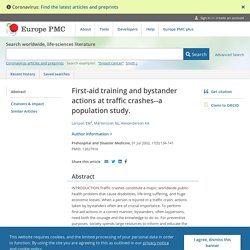 When a person is injured in a traffic crash, actions taken by bystanders often are of crucial importance. To perform first-aid actions in a correct manner, bystanders, often laypersons, need both the courage and the knowledge to do so. For preventive purposes, society spends large resources to inform and educate the public in order to enhance people's ability to take correct actions. However, there only is little information on the rate in a population of persons who have had first-aid training, have been bystanders at a traffic crash, on the actions taken by such persons, and on effects of first-aid training on patient care.

The Importance of Bystander Power. 81-year-old gets award for helping put out fire. Even grandma is helping, why shouldn't we? When Madam Lim Ee Chin saw black smoke billowing out from the front door of the Housing Board flat next to hers, the 81-year-old's first thought was not of her own safety but that of her neighbours. Madam Lim immediately filled a pail with water in her bathroom, dragged it across her living room floor to her front gate and passed it to her frantic neighbour, who had run out of his house to seek help in putting out the fire. "Of course I had to help. When I saw their house burning, it hurt my heart. They didn't set the fire on purpose. What if they have no house to live in? " On the night of Aug 9, Madam Lim had been watching television in the living room of her 12th-storey flat in Block 917 Jurong West Street 91 when she saw the smoke and heard her neighbour's cry for help.

For her bravery, she received the Community First Responder Award on Aug 27, the Singapore Civil Defence Force (SCDF) said in a Facebook post yesterday. KAMPUNG SPIRITOf I course had to help.