What is Bystander Effect?

Being part of a large crowd makes it so no single person has to take responsibility for an action (or inaction). In a series of classic studies, researchers Bibb Latané and John Darley found that the amount of time it takes the participant to take action and seek help varies depending on how many other observers are in the room. The Kitty Genovese Case.

Man convicted of culpable homicide for stabbing son-in-law, Courts & Crime News. Unhappy with how his son-in-law had treated his daughter and believing that it was part of a plan to cheat him of his business, a semi-retired businessman repeatedly stabbed the younger man in front of a lunchtime crowd. While waiting for the police to arrive, Tan Nam Seng phoned his daughter to tell her what he had done. "I can't sleep at night. I have done it. I have killed him. Don't cry. Yesterday, Tan, 72, pleaded guilty to a reduced charge of culpable homicide for stabbing 39-year-old Mr Spencer Tuppani in the chest three times outside a Telok Ayer Street coffee shop at about 1.20pm on July 10, 2017. Closed-circuit television footage was played in court showing Tan attacking Mr Tuppani, who was with three friends at the coffee shop.

Footage was also shown of Mr Tuppani running away and collapsing in front of a restaurant in Boon Tat Street. Tan was seen in the footage kicking Mr Tuppani twice in the face and chasing passers-by away. WHAT HE TOLD DAUGHTERI can't sleep at night.

Why does the Bystander Effect take over us?

Fight, Flight, or Freeze: How We Respond to Threats. The fight-flight-freeze response is your body’s natural reaction to danger. 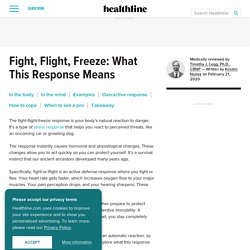 It’s a type of stress response that helps you react to perceived threats, like an oncoming car or growling dog. The response instantly causes hormonal and physiological changes. These changes allow you to act quickly so you can protect yourself. It’s a survival instinct that our ancient ancestors developed many years ago. Specifically, fight-or-flight is an active defense response where you fight or flee. Freezing is fight-or-flight on hold, where you further prepare to protect yourself.

Fight-flight-freeze isn’t a conscious decision. During a fight-flight-freeze response, many physiological changes occur. The reaction begins in your amygdala, the part of your brain responsible for perceived fear. The ANS consists of the sympathetic and parasympathetic nervous systems. In general, when your ANS is stimulated, your body releases adrenaline and cortisol, the stress hormone. Heart rate. Trauma Anxiety Physical activity. How Diffusion of Responsibility Affects Group Behavior. 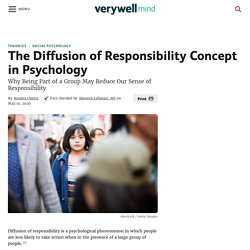 You notice a man fall to the ground and start convulsing as if having a seizure. Many people turn and look at the man, but no one moves to help or call for medical assistance. Why? Because there are so many people present, no one person feels pressured to respond. This situation is often used to explain the bystander effect, which suggests that the greater the number of people present, the less likely people are to help a person in distress.

What are Social Influences? (with pictures) Social influences could be defined as the sum of all things that may change or have some effect on a person’s behavior, thoughts, actions, or feelings. 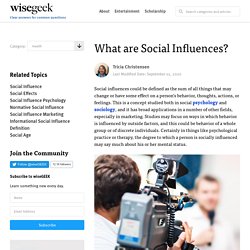 This is a concept studied both in social psychology and sociology, and it has broad applications in a number of other fields, especially in marketing. Studies may focus on ways in which behavior is influenced by outside factors, and this could be behavior of a whole group or of discrete individuals. Certainly in things like psychological practice or therapy, the degree to which a person is socially influenced may say much about his or her mental status.

A variety of scholars have defined ways in which individuals respond to social influences. The individual in an influential situation could comply, identify, or internalize, as defined by Professor Herbert Kelmen, a well-known scholar in this subject. Other people may identify with an influential person they either idolize from a distance or know intimately.

How do we overcome Bystander Effect?