The Biology of . . . Sourdough. About 34 years ago, Frank Sugihara recalls, he and Leo Kline, a fellow microbiologist, set out to "solve the mystery of San Francisco sourdough. 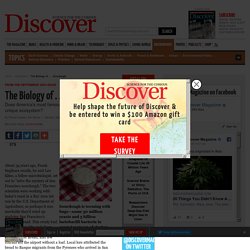 " The two scientists were working with baker's yeast in a Bay Area lab run by the U.S. Department of Agriculture, so perhaps it was inevitable they'd wind up studying San Francisco's signature bread. Sourdough Science. 17 Wonderful Health Benefits and Uses Of Cherries. History of Cherries Cherries originated in Asia Minor, in the fertile area between the Black and Caspian Seas, and was probably carried to Europe by birds. 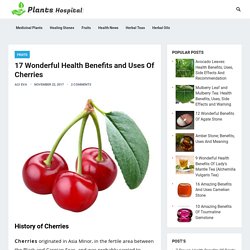 Cultivation began with Greeks, and was increased and expanded by Romans. Trees were planted along roadsides and were valued for their timber as well as their fruit. Sponsored Link. Climate change is affecting crop yields and reducing global food supplies. Farmers are used to dealing with weather, but climate change is making it harder by altering temperature and rainfall patterns, as in this year’s unusually cool and wet spring in the central U.S. 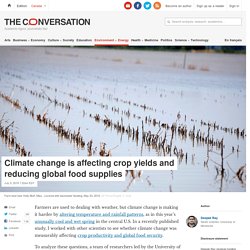 In a recently published study, I worked with other scientists to see whether climate change was measurably affecting crop productivity and global food security. To analyze these questions, a team of researchers led by the University of Minnesota’s Institute on the Environment spent four years collecting information on crop productivity from around the world. We focused on the top 10 global crops that provide the bulk of consumable food calories: Maize (corn), rice, wheat, soybeans, oil palm, sugarcane, barley, rapeseed (canola), cassava and sorghum. Roughly 83 percent of consumable food calories come from just these 10 sources. Weedkiller found in wide range of breakfast foods aimed at children.

Significant levels of the weedkilling chemical glyphosate have been found in an array of popular breakfast cereals, oats and snack bars marketed to US children, a new study has found. 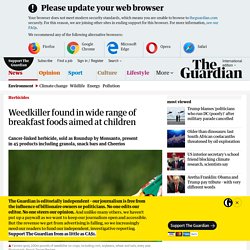 Tests revealed glyphosate, the active ingredient in the popular weedkiller brand Roundup, present in all but two of the 45 oat-derived products that were sampled by the Environmental Working Group, a public health organization. Nearly three in four of the products exceeded what the EWG classes safe for children to consume. Products with some of the highest levels of glyphosate include granola, oats and snack bars made by leading industry names Quaker, Kellogg’s and General Mills, which makes Cheerios.

One sample of Quaker Old Fashioned Oats measured at more than one part per million of glyphosate. This is still within safe levels deemed by the Environmental Protection Agency, although it is currently working on an updated assessment. Blood Cashews: The Toxic Truth About Cashew Production. Allen, Z. (2017, September 08). 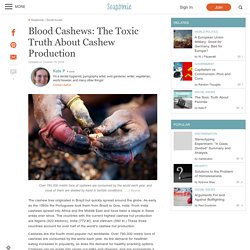 The Magnificent Cashew–Mysterious & Dangerous! Retrieved October 4, 2018, from Amon, J. (2015, September 02). National Cashew Day More Than Nuts. Carob flour has healing benefits, it´s a natural medicine. Carob flour has been used for years as a substitute for coffee, cocoa and egg. 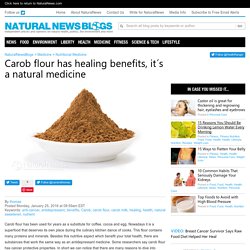 Food & Beverage (finally) meets Health & Wellness - Wharton India Economic Forum - Medium. The question of what to eat is critical regardless of the demographics of the customer. 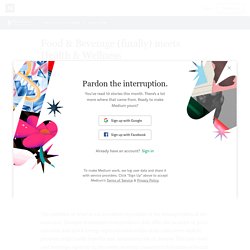 Younger consumers want products that offer the promise of good nutrition and quick energy replenishment while older consumers look to products with health benefits and minimized risk of disease. This puts food and beverage squarely at the center of every consumer’s definition of health and wellness. This realization, while obvious in hindsight, is only now taking hold of the market. Industry trends There are two broad trends driving the market changes in this space; How steak became manly and salads became feminine.

When was it decided that women prefer some types of food – yogurt with fruit, salads and white wine – while men are supposed to gravitate to chili, steak and bacon? 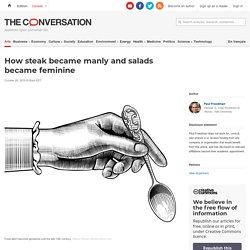 In my new book, “American Cuisine: And How It Got This Way,” I show how the idea that women don’t want red meat and prefer salads and sweets didn’t just spring up spontaneously. Beginning in the late 19th century, a steady stream of dietary advice, corporate advertising and magazine articles created a division between male and female tastes that, for more than a century, has shaped everything from dinner plans to menu designs. A separate market for women surfaces Before the Civil War, the whole family ate the same things together. These Mushroom Clouds Are Made From Actual Mushrooms. Photographer Henry Hargreaves plays with food often, especially the intersection of food and war. 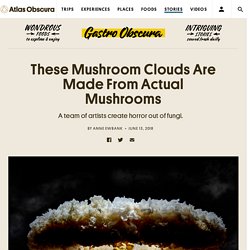 Previously, he transformed military rations into gourmet dishes—a project meant to accentuate the contrast between war fare and haute cuisine. But his current project has an even grimmer tone. In 1886, the US Government Commissioned 7,500 Watercolor Paintings of Every Known Fruit in the World: Download Them in High Resolution. T.S. 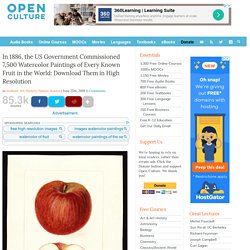 Eliot asks in the opening stanzas of his Choruses from the Rock, “where is the knowledge we have lost in information?” The passage has been called a pointed question for our time, in which we seem to have lost the ability to learn, to make meaningful connections and contextualize events. They fly by us at superhuman speeds; credible sources are buried between spurious links. Truth and falsehood blur beyond distinction. Harsh reality of pioneer diet. Acorns: The Inside Story - Eat The Weeds and other things, too. World’s Largest Acorn Acorn: More than a survival food. Best Fruits and Vegetables in Winter Season Good for your health. February is the best month to begin cleansing the body from toxins accumulated during the winter: let’s start every meal with a detox salad with fennels, leeks and turnips seasoned with extra virgin olive oil and a pinch of salt.

At the end of the month, you can collect early small and tender dandelion leaves, delicious if consumed raw. Here is a list of delicious seasonal fruits and vegetables. Leaf cabbage, which we know also known as closed cabbage, is a member of the Brassica family in which other vegetables such as broccoli, cauliflower and brucell sprouts come. All of these vegetables are large and bigger than flower leaves. Benefits of Alfalfa Leaf. The word “alfalfa” comes from the Arabic phrase, al-fac-facah, meaning "father of all foods.” It stands to reason, alfalfa is extremely nutritious. The extensive root system allows the plant to absorb a high level of nutrients from the soil.

Your kitchen and the planet: the impact of our food on the environment. The food we eat is responsible for almost a third of our global carbon footprint. In research recently published in the Journal of Cleaner Production we ranked fresh foods based on how much greenhouse gas is produced from farm to fork. Perhaps unsurprisingly, we found that red meat is the most emissions-intensive food we consume. But we also found that field-grown vegetables produce the least greenhouse gas. For instance, it takes about 50 onions to produce a kilogram of greenhouse gas, but only 44 grams of beef to produce the same amount.

My Nightmare Meal: A Personal Reflection of Our Food System - Dirt To Dinner. The Dirt: Agriculture Secretary Sonny Perdue recently cautioned Americans not to fear their food. What to Eat to Live to 100 – Personal Growth. Trend Tablet. Chemistry of Cast Iron Seasoning: A Science-Based How-ToSheryl's BlogSheryl's Blog. Food Of The Future - Food Ideas. Challenges and opportunities in clean, green synthetic foods. Moodle. In science fiction movies, we have seen many futuristic ideas about food. The Enduring Appeal of a Meal in a Pill - The Crux. Future - Meal-in-a-pill : A staple of science fiction.