This Is How Human Extinction Could Play Out (McKibben) Can Civilization Survive What’s Coming? Extreme Inequality Creates Global Disorder. The principal driver of global inequality—both within and between countries—is the global financial regime. 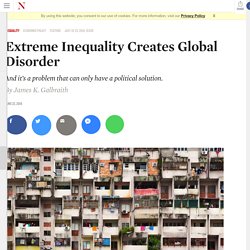 This has been a feature since the end of the Bretton Woods system in 1971, with recurrent catastrophic effects following the onset of the 1980s debt crisis, including the collapse of the socialist nations and the 1997 Asian financial crisis. Back then, it was a conservative stroke of genius to institutionalize “market exchange rates” on a global scale. Those markets work well enough for rich nations, but they guarantee problems for everyone else. Each exchange crisis has wiped out a decade or more of progress against inequality, as anyone in Brazil, Argentina, Mexico, or much of Africa will tell you.

The rise of China, on the other hand, has everything to do with its refusal to play the game of open capital markets. Global inequality is a security risk—and not just because it breeds resentment, violence, and mass migrations. The Big Four Deep Drivers of Destabilisation. The last but definitely not the least of my horsemen is the post-Cold War geopolitical situation. 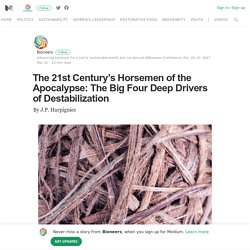 The fall of the old Soviet Union and the “czarist/orthodox/nationalist” revival in Putin’s Russia, the meltdown of much of the Middle East and some of Central Asia, immense population increases in Africa, political instability in the U.S. and Europe, and of course, most consequentially, the dramatic rise of China, have created a far more dangerous landscape because there are so many more “hot spots” that could trigger major conflicts, and the stasis of the Soviet-US stalemate has been replaced by a slew of far more dynamically fluid crises. The most potentially globally consequential of all is of course the U.S. /China rivalry. History is not comforting about what usually transpires when a rising power and a declining one face off.

Known among historians as “Thucydides’ Trap,” the classic pattern, from Athens vs. 10 Doomsday Future Predictions. Charlize Theron in Mad Max: Fury Road The future looks bright, except when it doesn't. 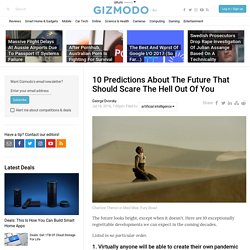 Here are 10 exceptionally regrettable developments we can expect in the coming decades. Listed in no particular order. 1. Virtually anyone will be able to create their own pandemic Earlier this year, Oxford's Global Priorities Project compiled a list of catastrophes that could kill off 10 per cent or more of the human population. Illustrated version of Steven King's The Stand (Image: Marvel Comics) Many of the technologies for this prospect are starting to appear, including the CRISPR/cas9 gene-editing system and 3D-bioprinters. The fear is that a rogue state, terrorist group, or a malign individual might create their own virus and unleash it. 2.

One of the more radical visions of the future is a world in which biological humans have traded-in their corporeal bodies in favour of a purely digital existence. Ben Kingsley having his mind transfered in Selfless. 3. 4. Big Brother watches William Hurt in 1984. How Western civilisation could collapse. This story is featured in BBC Future’s “Best of 2017” collection. 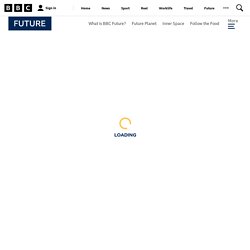 Discover more of our picks. The political economist Benjamin Friedman once compared modern Western society to a stable bicycle whose wheels are kept spinning by economic growth. Should that forward-propelling motion slow or cease, the pillars that define our society – democracy, individual liberties, social tolerance and more – would begin to teeter. Our world would become an increasingly ugly place, one defined by a scramble over limited resources and a rejection of anyone outside of our immediate group. Should we find no way to get the wheels back in motion, we’d eventually face total societal collapse.

Such collapses have occurred many times in human history, and no civilisation, no matter how seemingly great, is immune to the vulnerabilities that may lead a society to its end. Disaster comes when elites push society toward instability and eventual collapse by hoarding huge quantities of wealth and resources. Why the World is Headed the Way of Easter island. Petros Sekeris. 19 November 2014. 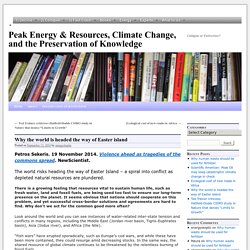 Violence ahead as tragedies of the commons spread. NewScientist. The world risks heading the way of Easter Island – a spiral into conflict as depleted natural resources are plundered. There is a growing feeling that resources vital to sustain human life, such as fresh water, land and fossil fuels, are being used too fast to ensure our long-term presence on the planet. It seems obvious that nations should cooperate on this problem, and yet successful cross-border solutions and agreements are hard to find. Look around the world and you can see instances of water-related inter-state tension and conflicts in many regions, including the Middle East (Jordan river basin, Tigris-Euphrates basin), Asia (Indus river), and Africa (the Nile). “Fish wars” have erupted sporadically, such as Europe’s cod wars, and while these have been more contained, they could resurge amid decreasing stocks. The outcome offers an explanation for the gap between theory and reality.